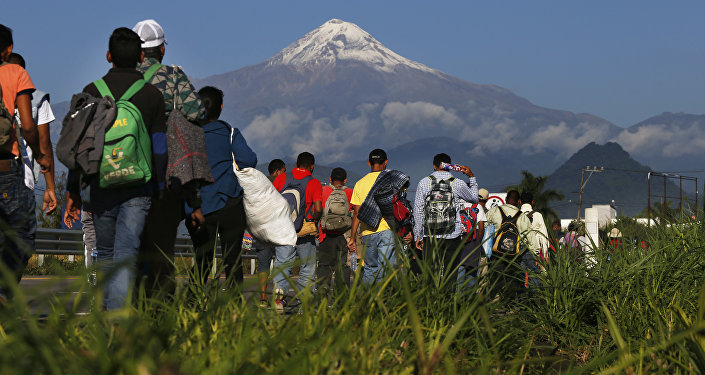 The Biden administration has announced plans to open another tent facility in Del Rio, Texas, expected to increase processing capacity for migrant families and unaccompanied children arriving at the US-Mexico border.

In a statement on Friday, US Customs and Border Protection (CBP) cited an increase in border encounters amid the coronavirus pandemic and “natural disasters impacting the area”, adding that the new facility aims to “help accommodate migrants in our custody”.

“As we work to build and improve permanent facilities for the safe and orderly processing of individuals at the border, temporary soft-sided facilities are sometimes necessary to meet operational needs that may arise due to rising encounters, particularly under challenging circumstances”, the statement pointed out.

Earlier in February, the CBP announced the opening of a similar “soft-sided” facility the city of Donna, Texas, in a bid to tackle migrant flows.

The CBP’s latest move comes a day after Brian Hastings, the Border Patrol sector chief in the state’s Rio Grande Valley tweeted that over the past 24 hour, “this [transborder] area alone saw more than 500 illegal entries”.

RGV agents continue to apprehend groups of more than 100 illegal aliens along the Rio Grande.

These groups composed primarily of families and unaccompanied alien children (UAC) add to the over 13,500 families and UACs previously apprehended in #RGV, from Oct to Feb. pic.twitter.com/3xvcrQkpsk

The tweet was posted amid reports that in the Del Rio area refugees had been released after being fingerprinted and given immigration court summonses, in what is know as catch-and-release procedures.

In a separate development earlier this month, the CBP said in a report that January saw a 6-percent increase in the number of migrant families with children and unaccompanied minors detained along the country’s southern border.

Last month, the CBP apprehended almost 5,900 unaccompanied minors and detained 7,500 parents and children travelling together, as compared to about 4,700 apprehensions of families and nearly 5,000 arrests of unaccompanied children in December, according to the survey.

The CBP suggested that the growth in crossings could be linked to crime and the unstable situation in some Latin American countries, as well as “inaccurate perceptions of shifts in immigration and border security policies”.

This came in the wake of reports that the US Border Patrol has been swamped by a flow of illegal immigrants in Texas since a new immigration policy was introduced by US President Joe Biden.

In contrast to Trump’s clear-cut Mexico wall project and other steps aimed at containing illegal immigration, Biden earlier vowed to suspend the construction of the wall, and to end the deportation of immigrants who illegally arrived in the US with their parents, but are currently required to leave the country when they turn 21, and known informally as “dreamers”.

POTUS also stated that he would lift Trump’s entry ban against citizens from 13 countries.

US Did More FONOPS, Surveillance Flights in South China Sea in 2020 Than Ever Before – Report