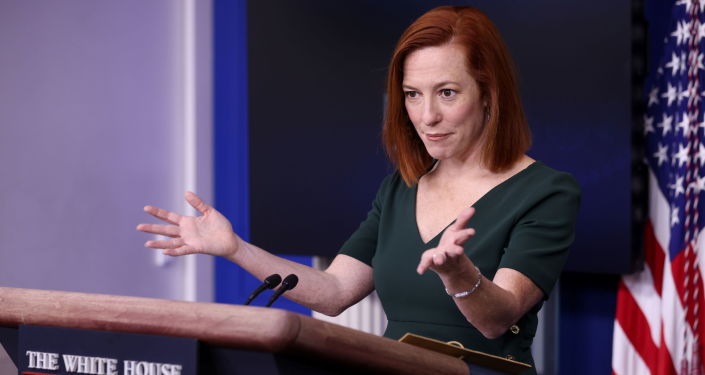 White House Press Secretary Jen Psaki had to repel “hypocrisy” calls from The View co-host Meghan McCain, who on Thursday pressured the official about the Biden administration’s reopening of a Texas migrant facility that ex-President Donald Trump had been much criticised for.

“President Biden and Vice-President Kamala Harris repeatedly spoke out against kids in cages. I feel like this is the same thing and that you are still detaining kids at the border and this is not meaningfully different from what President Trump was doing,” the interviewer, who is the daughter of the late Senator John McCain, said.

Psaki responded that the re-opening of the centre, which could house up to 700 children crossing the US border from Mexico, was “absolutely not the same thing” as the policies of the former administration.

“We are not ripping children from the arms of their parents. That is horrible and immoral and something we saw in the last administration,” Psaki argued to defend the measure which she said was especially needed in the times of COVID as kids were fleeing “really difficult circumstances in their home country” and “prosecution”.

.@PressSec defends Biden admin’s decision to reopen a migrant facility for unaccompanied children, telling @TheView it’s “absolutely not the same” as Trump’s policy and was “best decision” to “keep these kids safe”: “We are not ripping children from the arms of their parents.” pic.twitter.com/OFFOV7ty7C

​The Texas facility would thus help to “treat them humanely and keep them safe”, the press secretary maintained. She did not deny though that the centre would host children separately from their parents – something Donald Trump was strongly blasted for throughout his presidential term.

So McCain was not really convinced by Psaki’s arguments:

“There’s criticism all the way around including from people within your own party like AOC and I think there’s just a lot of people that see this as hypocrisy and that it’s sort of just potato potato. Kids in cages are just kids being separated from their families,” the show host said.

Psaki had to defend her boss one more time:

“This is kids going to a facility run by HHS [US Department of Health and Human Services],” she argued.

“We had to open a new one to make sure it had the safe protocols in order to address the COVID needs and the health and safety needs because we can’t have as many kids in the former HHS facility.”

Health and Human Services officials announced this week that first children had arrived at a Trump-era holding centre in Carrizo Springs, Texas that has remained closed since July 2019.

The former US president was famously criticised for his administration’s immigration policies separating children from their families when they were apprehended by the Border Patrol and sent to migrant facilities to be kept unaccompanied by adults.

© REUTERS / MIKE BLAKE
A bus leaves a closed border facility as migrants subject to a Trump-era asylum restriction program were expected to begin entry into the United States at the San Ysidro border crossing with Mexico, in San Diego, California, U.S., February 19, 2021

Trump repeatedly pointed out that many of the detention centres were built under ex-President Barack Obama who had actually pioneered the family separation tactics but his critics have remained steadfast. Trump’s administration eventually moved to shut down some of the child detention facilities, including the one Homestead, Florida over a backlash about their “prison-like conditions.”

Officials have explained the decision to turn to the frequently maligned facilities by a growing number of migrants arriving at the US southern border, including often unaccompanied kids, which the Border Patrol just does not have the capacity to host.

But the announcement was expectedly met with a strong backlash, even from Biden’s Democratic supporters. Trump’s fierce critic Rep. Alexandria Ocasio-Cortez, known by her initials and Twitter handle AOC, blasted the decision, tweeting that this “is not okay, never has been okay, never will be okay – no matter the administration or party”.

US Lawmaker to Sleep Outside Capitol to Promote Extending Eviction Moratorium