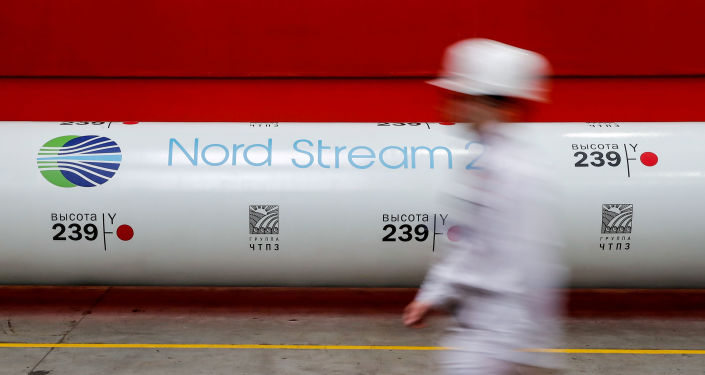 The German government has made no official comment regarding the moves by a number of its companies, as well as American firms, to terminate their contracts with the Russian-Western European energy project Nord Stream 2.

German government spokesman Steffen Seibert said on 24 February during a briefing that it was invariably a decision that companies directly involved had to make themselves.

Earlier, the London-based subsidiary of German company Munchener Ruck (English “Munich Re”) withdrew from the provision of insurance services for Nord Stream 2.

Also on Wednesday, the German Foreign Ministry said there are no negotiations at the level of foreign ministries with the United States on Nord Stream 2 yet.

“I cannot yet report on such negotiations. The fact that we would like such consultations and negotiations has been stated by the foreign minister on several occasions,” said German Foreign Ministry spokeswoman Maria Adebahr.

“We know the critical attitude [toward the Nord Stream 2 project] on the part of the United States and US politicians, which is shared not only by the President, but also by part of the Congress. I believe that US friends know the position of the German government. Of course, this is the topic we are talking about,” added the spokeswoman.

This comes as a branch of German insurance company Munchener Ruck, engaged in the reinsurance of German and foreign insurance companies, ended its work with Nord Stream 2, company spokesman Frank Ziegler has confirmed to Sputnik earlier, saying:

“We’re talking about our subsidiary company Munich Re Syndicate in London; it had a contract, and it has been terminated. I can confirm this,” Ziegler said, stopping short of offering any further details on the matter.

On 22 February, State Department Spokesman Ned Price said Washington was pushing ahead with its review of potential “sanctionable activity” by firms involved in the building of the Nord Stream 2 gas pipeline project, which will be able to pump an additional 55 billion cubic metres of Russian natural gas to Germany annually.

“We continue to examine entities involved in potentially sanctionable activity. We have been clear that companies risk sanctions if they are involved in Nord Stream 2,” Price said at a press briefing.

The United States has imposed several rounds of sanctions on the Nord Stream 2 project, expected to be finished by late 2021, in recent years.

The 745-mile-long twin pipeline will carry up to 2 trillion cubic feet of gas annually from Russia to Germany along the bottom of the Baltic Sea, passing through the territorial waters or exclusive economic zones of Russia, Sweden, Denmark, Finland, and Germany.

The project has been actively opposed by the US, as Washington hawks its own liquefied natural gas (LNG) to the EU. Washington has also argued the pipeline will create too much European dependence on Russian energy supplies. The project has also rankled other opponents, such as Ukraine and a number of EU countries, including Poland. However, Germany and Austria have rejected calls to abandon the project despite the US pressure.

On 19 February the Biden administration submitted a report to Congress on its assessment of sanctionable activities related to the Nord Stream 2 pipeline, reported Bloomberg.

While it fails to propose new sanctions against the pipeline, it makes mention of pipe-laying vessel Fortuna and its owner KVT-RUS, both already targeted with the US restrictions, stated the outlet.

The report, the text of which is yet to be made public, ostensibly claims around 18 European companies have either terminated their participation in the Nord Stream 2 pipeline or have promised to withdraw from the project over threats of US sanctions.

“This shows that the legislative goals and our actions have been successful. We continue to monitor companies involved in potentially sanctionable acts,” Price was quoted by DW as saying.

The US slapped two rounds of sanctions on the Russian-West European energy infrastructure project.

Us President Joe Biden’s administration has characterised Nord Stream 2 as a “bad deal for Europe,” but has yet to announce any additional measures against the project.