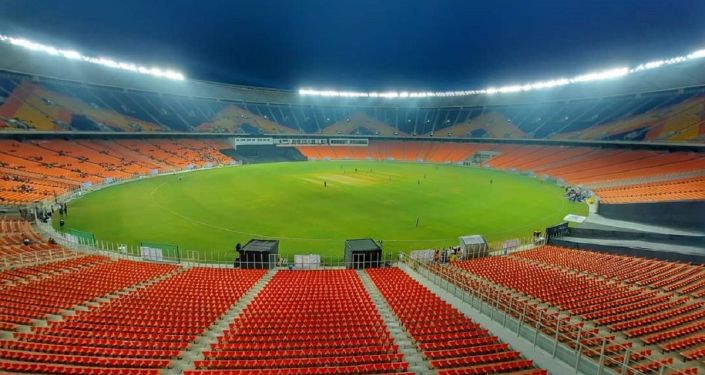 Surpassing Melbourne Cricket Ground (MCG), to become the largest cricket stadium in the world, Motera stadium in Gujarat’s Ahmedabad is set to host its inaugural match between India and England on 24 February.

The third match of the India-England series being played at Motera is going to be a day-night Test, only the second one to be held in India after the pink-ball cricket Test against Bangladesh at the Eden Gardens (Kolkata, West Bengal) in 2019.

India’s President Ram Nath Kovind along with India’s Minister of Home Affairs Amit Shah will officially inaugurate the stadium. Reconstructed at a cost of over $110 million (INR 8 Billion), the stadium hosted Prime Minister Narendra Modi and former US president Donald Trump in an event last year.

​Spread over 63 acres, the Motera stadium has a seating capacity of 110,000, more than that of the previous largest cricket ground, Melbourne Cricket Ground, which has a capacity of close to 100,000.

The stadium in Gujarat is also the second-largest stadium in the world by capacity after North Korea’s Rungrado 1st of May Stadium, which can host 150,000 people.

Meanwhile, due to Covid-19 restrictions, Gujarat Cricket Association (GCA) has allowed only half of the stadium’s capacity to be filled. The association expects around 30,000 to 40,000 spectators on a daily basis.

“We expect the number to go up when India bats. The spectators will be handed masks and sanitisers at the entrance. We expect them to maintain social distance in the gallery. There will be volunteers present to keep them reminded about masks and social distancing,” Anil Patel, GCA joint secretary, said during a press conference.

Both India and England head into the third Test with the series level at 1-1 and a spot in the World Test Championship final in mind.

The stadium will also host the fourth test match between India and England, along with the five T-20 series matches starting next month between the two sides.

The last time Ahmedabad hosted a Test match was way back in 2012.