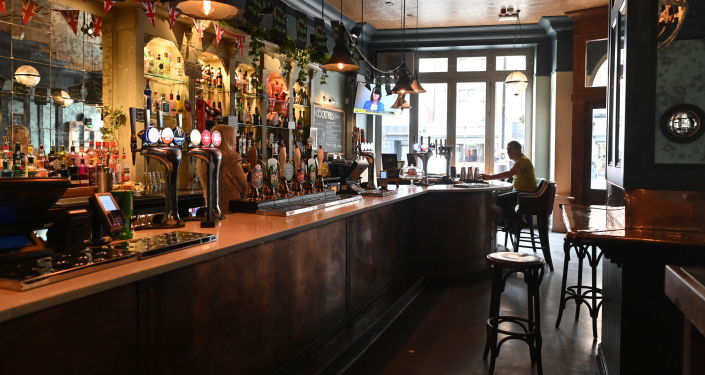 The calls follow the publication of the Prime Minister’s COVID roadmap which seeks to end the lockdown in England by the 21st of June later this year. Looking at the measures in greater detail, Michael Kill, the CEO of the UK’s Night Time Industries Association, shares his thoughts on the government’s exit strategy out of lockdown.

Sputnik: What are your thoughts on the proposed roadmap out of lockdown? Do you welcome the approach announced earlier this week?

Michael Kill: I think the important pieces that we’ve taken from it at the moment, given that we’ve still got quite a lot of detail to go through and there’s quite a considerable amount of critical questions that have gone unanswered is: one, we’re part of the narrative, and two, we’ve got a date that we can plan towards.

I would take those as positives but we are very tentative in terms of understanding what the long-term position will be, particularly for some of the hardest-hit businesses, like nightclubs, casinos, etc, and we’re quite tentative around the fact that the hospitality sector is open secondary to the non-essential retail sector, which we believe as a hospitality and night time economy sector crossover, that we are very safe environments to be able to engage.

So, there’s lots of questions still to answer, and as you can appreciate the devil’s in the detail. So, our perspective is it’s welcomed in terms of narrative and date, but there is also a bigger picture that we have to consider, which is what the budget is going to look like next Wednesday when it’s released.

Michael Kill: Well, there’s still a question over things like rapid testing, what the implications are, not so much for large scale events because I think there are considerations there and opportunities, both from a cost perspective, and facilitation, or logistical perspective. With regards to things like nightclubs and venues that becomes a bit tougher. So, we want to understand where the government is in terms of what tech solution they’ve got, what they’re looking for in terms of rapid testing.

We’ve identified the fact that it’s got to be a short term or a breaching mechanism to get us to the point of critical mass when it comes to vaccinations, so there are questions like that, that need to be considered but bigger than anything else, I mean, many of these businesses are really on their last legs.

So, ultimately, the roadmap is great. It looks like we’ve got a date, we’re part of the narrative, but if we don’t get any financial support mechanism that’s going to take us through, which has several components including two of the biggest costs, which are the likes of furlough and rent, then most of these businesses are not going to make it through to the dates that have been proposed.

They work hand in hand together, so that’s where we’re sort of levied at the moment. [It’s] fine having the roadmap, but the financial element is the second part, then we can start talking about the logistics, and how that manifests itself moving forward.

Sputnik: Has there been any indication of the level of support that will be offered to firms expected to remain closed between now and the end of lockdown, and essentially will it cover all employers, employees, freelancers, and self-employed workers?

Michael Kill: Well without a doubt the biggest cost that everyone has is their staff. Furlough needs to be extended, for us it needs to be extended towards the end of the year, the self-employed have got to be included within that narrative from government but we also need to close those gaps in terms of sold directors and freelancers that have fallen through the gaps at the moment; and there are within our sector, and other sectors, there’s over 3 million people that have been excluded or put into a position of financial hardship.

So, from our perspective that’s primary. The commercial rent position for frontline businesses is very difficult because the moratorium comes to an end at the end of March, and we’re very concerned that there is a rallying cry from landlords moving forwards to reissue more grab venues or spaces back, which would be catastrophic for the cultural sector, particularly clubs who have been hardest hit, and probably three quarters in rent arrears because they’ve not been able to trade.

There needs to be quite a pragmatic solution from government, we’ve put forward that there needs to be a shared burden position where historical debt needs to be cleared by each of those counterparts or those stakeholders sharing that debt, and then we need to look at turnover rent position in the guise, or back to reinforced, by a Government Code of Conduct, which has a mandatory element to it so that there are no movement or no silliness between landlord and tenant at the coalface.

The Code of Conduct last year didn’t really work. It was just a voluntary code of conduct, and I think what’s happened with the government is they are pushing this as hard as they can down the road hoping that the financial pressures will bring people to the table, but I think you’ll find that over 40% of these businesses still haven’t engaged and got a solution by their landlords, so we’re still in quite a critical position that needs resolving.

Swedish Crown Princess and Her Husband Test Positive for COVID-19