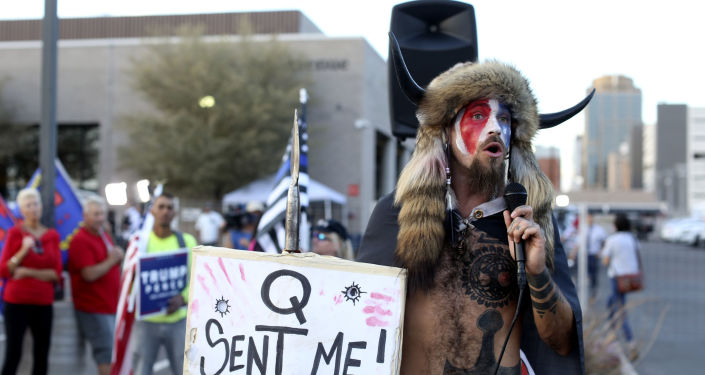 Jacob Chansley, better known as “QAnon Shaman”, a face-painted and fur-wearing Arizona man who took part in the 6 January Capitol building riots, lost his faith in former US president Donald Trump when he pardoned rapper Lil’ Wayne instead of him, his bail motion filed on Tuesday by his lawyer reveals.

The protester now would be focusing “his energies and efforts on strengthening his commitment to his faith” and “living a life which does no harm to any living being”.

“After the defendant noted former president Trump’s pardoning of his friends and colleagues and Lil Wayne, the defendant was compelled to reconcile his prior faith in Trump,” the filing, released by defence attorney Albert Watkins reads.

Chansley has pleaded not guilty to felony charges of civil disorder and obstructing an official proceeding, as well as four other misdemeanour charges.

In the bail motion, the lawyer also made the case against the government’s argument that Chansley used a “dangerous weapon” during riots, saying that it was a “mischaracterisation” of a flag pole that was in Chansley’s possession at the time.

Previously, Chansley’s lawyer said that his client was “horrendously smitten” by Trump but then felt like he was betrayed after the former leader’s refusal to grant his client and others who participated in the riot a pardon.

On 6 January, a Washington “Stop the Steal” rally in support of then-US president Donald Trump ended up in some protesters breaking into the Capitol building, disrupting the certification of Electoral College votes being held there that day. Ultimately five people died as a result of the riot.

Trump was accused of “inciting an insurrection” and impeached by the US House of Representatives but was later acquitted by the US Senate on 13 February. Trump, who called on supporters to oppose Joe Biden’s nomination “peacefully” during the rally, has denied his responsibility for the actions of the protesters, saying that his remarks were “totally appropriate”.

Oil ‘On The Rebound’: What Could Investors Face As The Oil and Gas Market Normalises Post-COVID-19?