‘He Has by Far the Largest Voice’: Romney ‘Pretty Sure’ Trump Would Win 2024 GOP Nomination 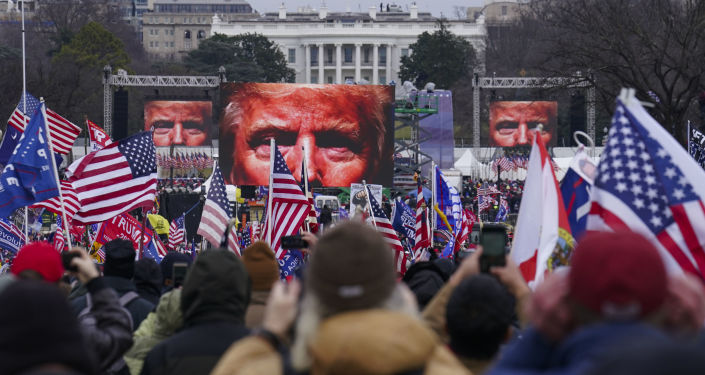 Sen. Mitt Romney (R-Utah) is ‘pretty sure’ that former US President Donald Trump would win the Republican Party’s presidential primary in 2024 if he decides to run.

“He has by far the largest voice and a big impact in my party. I don’t know about his family members, whether they intend to do that, but I expect he will continue playing a role,” said Romney, speaking in an interview on Tuesday for The New York Times’s DealBook DC Policy Project.

Acknowledging that “a lot can happen between now and 2024”, the Utah Republican is inclined to regard Trump as a potentially strong contender for president in the next election cycle.

“I look at the polls and the polls show that, among the names being floated as potential contenders in 2024, if you put President Trump in there among Republicans he wins in a landslide,” said Romney.

When asked whether he himself might consider campaigning against Trump if he ran in 2024, Romney, a vocal critic of the former president, said he would support someone else in the party.

“I would not be voting for President Trump again. I haven’t voted for him in the past and I would probably be getting behind somebody who I thought more represented the tiny wing of the Republican party that I represent,” he said, underscoring that he perceived himself as more of a ‘traditional conservative’ than some of the ‘populist rhetoric within my party.’

‘Poll Numbers Through the Roof’

This comes as ex-POTUS Trump has been persistently cagey on questions about whether he intends to run for president again in 2024.

Earlier in February, during a Newsmax interview to commemorate the late radio host Rush Limbaugh, Donald Trump told host Greg Kelly that he was “seeing a lot of great polls out there”, while acknowledging it was too soon to announce whether he’ll run for president again in 2024.

“As far as 24, too early to say … I won’t say yet [if I’m running again], but I have tremendous support, and I’m looking at poll numbers that are through the roof. … I’m the only guy who gets impeached and my numbers go up,” said Trump.

Suggesting further proof that Donald Trump continues to hold sway with GOP voters, an exclusive Suffolk University/USA TODAY Poll revealed that Trump’s support seemed unimpacted by his second impeachment trial in the Senate on a single charge of ‘inciting an insurrection’ in the assault on the Capitol on 6 January.

© Sputnik / Artur Gabdrakhmanov [
Demonstrators protest outside US Capitol Building in Washington to contest the certification of the 2020 presidential election results by the US Congress, 6 January 2021

Among a surveyed sample of previous voters from national and state elections who indicated they were planning to vote for Trump, a majority (54 percent) of Trump supporters revealed they feel more loyalty to Donald Trump than to the Republican Party (34 percent).

Feeding into speculations has been a recent report that suggested former President Donald Trump will claim he is the leader of the Republican party and its “presumptive 2024 nominee” during his first public appearance since leaving office, at the Conservative Political Action Conference in Orlando on 25-28 February.

The ex-POTUS’s advisers, reported Axios, citing a longtime Trump adviser, would be converging on his Mar-a-Lago estate this week to chart his future political moves.

Furthermore, it was suggested the former president intended to “stoke primary challenges for some of those who have crossed him, and shower money and endorsements on the Trumpiest candidates”.

Trump’s upcoming speech to address the Conservative Political Action Conference (CPAC) will reportedly be “a show of force” to carry across the message: “I may not have Twitter or the Oval Office, but I’m still in charge.”

A spate of social media platforms, such as Twitter, Facebook, Instagram, and YouTube, permanently blocked Trump’s accounts following the 6 January riots in Washington, DC. At the time, thousands of protesters stormed Capitol as Congress met to certify Democrat Joe Biden’s win in the 2020 election, with five people dying in the unrest.

© AP Photo / U.S. Senate TV
The U.S. Senate votes to acquit former U.S. President Donald Trump by a vote of 57 guilty to 43 not guilty, short of the 2/3s majority needed to convict, during the fifth day of the impeachment trial of the former president on charges of inciting the deadly attack on the U.S. Capitol, on Capitol Hill in Washington, U.S., February 13, 2021. U.S. Senate TV/Handout via Reuters EDITORIAL USE ONLY NO COMMERCIAL SALES TPX IMAGES OF THE DAY

Trump was subsequently accused of inciting “insurrection” with his calls to “fight like hell” to challenge a “rigged and stolen” election.

Despite dismissing all accusations, Trump was impeached for a second time, although lawmakers failed to secure the required two-thirds majority to convict him and, accordingly, bar him from running for office again.