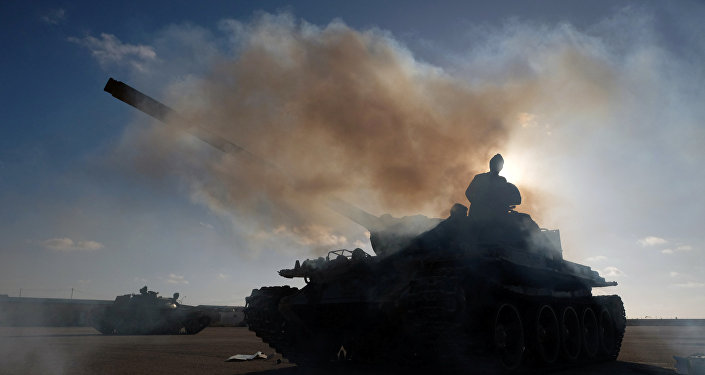 Blackwater founder Erik Prince has rejected the findings of a United Nations investigation accusing him of violating a UN-imposed arms embargo on Libya and funneling military support to Libyan general Khalifa Haftar.

“The results of the United Nations investigation are completely wrong,” Prince said, his remarks cited by Middle East Monitor.

The businessman dismissed several claims made in the report, including the allegation that he was an advisor to Donald Trump on Libya. In reality, Prince claimed, he had only met Trump once during his time in office. Prince also said that he had never discussed Libya with the president, Secretary of State Mike Pompeo, or Trump son-in-law and senior advisor Jared Kushner.

Prince also denied ever meeting Haftar, or traveling to Cairo, Egypt in April 2019 to do so.

The former Navy SEAL, who currently runs the Hong Kong-listed private security company Frontier Services Group, says he has yet to familiarize himself with the contents of the UN report.

Prince’s remarks followed last week’s publication by media of excerpts from a confidential report to the UN Security Council’s Libya sanctions committee which claims that Prince sent a group of mercenaries and weapons to Libya in 2019 in an $80 million contract dubbed ‘Project Opus’.

The deal, said to have been reached during Haftar forces’ assault on Tripoli – capital of the UN-backed Government of National Accord, allegedly included the provision of drones, assault helicopters, surveillance aircraft, gunboats and intelligence and cyber warfare capabilities, as well a small, elite mercenary force headed by a former Royal Australian Air Force pilot and confidant of Prince. The force was reportedly marketed to Haftar as an on-call hit squad, and included five British nationals, including two former Royal Marines, 12 South Africans, an American and three Australians.

Haftar, commander of the armed forces of the Libyan House of Representatives – the legislative body fighting the GNA for total control of the oil-rich nation, reportedly canceled the contract after the mercs failed to get ahold of choppers shipped from South Africa in time and showed up in Benghazi empty-handed. The mercenaries then reportedly fled to Malta in two rubber dinghies in fear for their lives.

The Libyan National Army’s 2019 offensive on Tripoli ground to a halt after Turkey sent large quantities of troops and equipment to shore up the GNA, also in possible violation of the Libya arms embargo. The LNA and the GNA agreed to a ceasefire and talks in October 2020.

Prince now faces the prospect of UN sanctions, including bank account and asset freezes, and a travel ban. The Australian national in charge of the hit squad could face up to 10 years in prison and half a million dollars in fines for his role if convicted.

The contents of the UN report are expected to be made public next month.

Prince is best-known as the founder of the private security contractor Blackwater. In 2007, Blackwater gained international notoriety after a group of contractors killed 14 Iraqi civilians in Baghdad. In December 2020, Donald Trump pardoned the four contractors convicted of involvement in the killings.