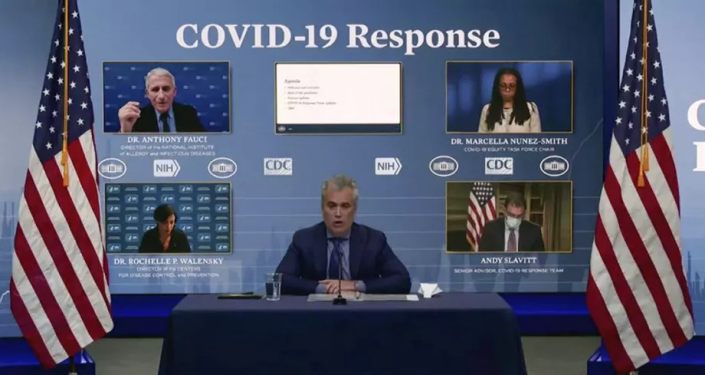 Americans faced a moment of confusion this month after White House Press Secretary Jen Psaki contradicted Centres for Disease Control and Prevention Director Rochelle Walensky’s remarks about the prospects of teachers returning to classrooms without getting their vaccine shots first.

In early February, Walensky reported that guidelines for school reopenings would likely include mandatory mask-wearing among teachers, staff, and students, as well as social distancing, but would not require teachers to get vaccinated first.

A day later, Psaki appeared to challenge the CDC director, suggesting Walensky was “speaking in her personal capacity,” even though the comments were made in an official administration coronavirus briefing and broadcast on television.

After 12 February, when Walensky formally confirmed the new guidelines, and said that vaccinations would not be mandatory, the White House continued to waffle and avoid direct answers on CDS school guidance, to the chagrin even of sympathetic pro-Democrat media. Last Wednesday, Vice President Kamala Harris repeatedly dodged a reporter’s question on whether teachers would have to be vaccinated before it’s considered safe for them to return to classrooms, despite being asked about it four separate times.

The school openings issue was reportedly just one of several occasions on which White House officials and scientists charged with coordinating America’s coronavirus strategy appeared to contradict one another.

After his inauguration, Biden promised that his administration’s coronavirus strategy would be “comprehensive” and “based on science, not politics,” “based on truth, not denial.” He vowed to allow the scientific community to “work free from political interference” and to “make decisions strictly based on science and health care alone…not what the political consequences are.”

However, the White House’s communications haven’t always lived up to that commitment. For example, while Psaki recently blamed the Trump administration for failing to order enough coronavirus vaccine jabs for the country’s vaccination campaign, Walensky and other scientists have said that state authorities’ decisions to hold doses in reserve, not their total amount, was to blame for the slower and more chaotic than expected rollout.

Speaking to The Daily Beast, current and former officials said that part of the problem of “messy” and contradictory messaging by White House staff and scientists came down to their goals. While officials’ efforts have included partisan bickering and attempts to present a coherent narrative, scientists have freely changed what they have said based on new information. Combined with the media’s search for sensation, this has caused what seems like incompetent and incoherent mixed signals.

“I think in general there are answers to questions that get put to scientists that, because we live in the nuanced news environment, can be unforgiving,” a former senior Trump administration official told the outlet.

“Media can clip a single sentence that may have been couched in a tone of caveats. It is great we have people that are media savvy and are scientists, but if you want to have communications and science…[scientists] answer the questions presented to them. They don’t stick to a script. It makes communicating very hard,” the official added.

One current official complained that the lack of coordination between scientists and White House staff can mean that the White House doesn’t have “the ability to speak with authority when they get to the podium.”

“I think that it’s understandable that people are frustrated,” a senior CDC official said. “Folks have been tackling this pandemic at the individual family and community level for over a year now.”

Mixed messaging or even outright falsities – such as the promise in early 2020 that a two week lockdown would stop or at least significantly curb the virus’s spread, have been prevalent in the Covid-19 responses of countries worldwide, and are likely to have contributed to public fatigue with the virus, or even the spread of distrust in state institutions, scientific advisors and coronavirus guidelines themselves.