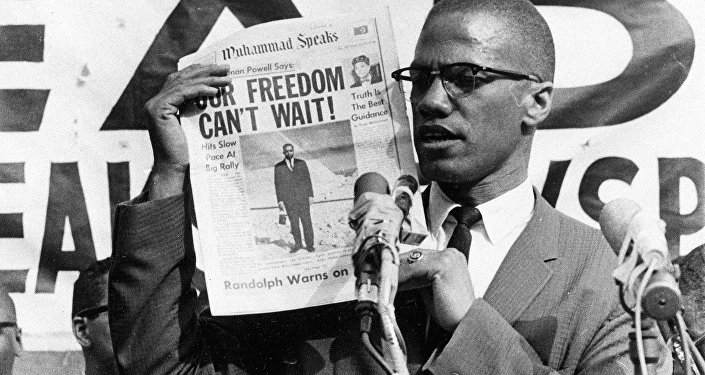 Civil rights attorney Ben Crump and the surviving daughters of Malcolm X on Saturday, a day before the 56th anniversary of X’s assassination, unveiled in New York’s Audubon Ballroom new allegations about events leading up to the activist’s 1965 death. Three members of the Nation of Islam were previously convicted for their respective roles in the murder.

“Even though this is going to be an astonishing revelation from the past … past is prologue,” Crump said Saturday, alongside co-counsels Ray Hamlin and Paul Napoli.

Reggie Wood, the administrator of Ray Wood’s estate, read the letter to Qubiliah, Ilyasah, and Gamilah Shabazz, daughters of the late activist, detailing how the now-deceased cop was ordered to have Shabazz’s security detail arrested days before his 1965 assassination.

“Ray Wood, an undercover police officer at the time, confessed in a deathbed declaration letter that the NYPD and the FBI conspired to undermine the legitimacy of the civil rights movement and its leaders,” Crump noted.

The release claimed that Wood, “without any training,” was ordered to “infiltrate civil rights organizations and encourage leaders and members to commit felonious acts,” including “ensuring that Malcolm X’s security detail was arrested days prior to the assassination, guaranteeing Malcolm X didn’t have door security while at the Audubon Ballroom, where he was killed on Feb. 21, 1965.”

A spokesperson for the NYPD’s Office of the Deputy Commissioner, Public Information told CBS News that the police department has “has provided all available records relevant to that case to the [Manhattan] District Attorney,” which had already launched a review of the initial investigation and prosecution for the assassination.

The Manhattan DA has noted the “office’s review of this matter is active and ongoing.”

Three members of the Nation of Islam – Mujahid Abdul Halim, then known by the names Thomas Hagan and Talmadge X Hayer; Muhammad Abdul Aziz, then known as Norman 3X Butler; and Khalil Islam, then known as Thomas 15X Johnson – were arrested, tried and convicted for the activist’s murder and received 20-years-to-life sentences for their roles in the murders.

Bullet holes in back of stage where Malcolm X was shot

Halim, who was paroled and released from prison in 2010, has maintained that Aziz and Islam, the latter of whom died in 2009, were innocent of the murder of Malcolm X.

“I was there, I know what happened and I know the people who were there,” Halim, who was then going by Hayer, said in 1966. He told the New York Post that he has “regrets and sorrow” for the fatal shooting.

During his conversion to Islam, Little ditched his birth surname, saying the name was given by white slave masters, and changed it to ‘X’ to represent his family’s lost link to Africa due to the Atlantic slave trade.

Malcolm X moved to Detroit, Michigan, following his early release in 1952, and worked as an active member and advocate for the Nation of Islam, which borrows certain teachings from Islam and speaks to a purported black race superiority.

The activist came under the watch of the FBI beginning in 1953, particularly for remarks that state, or white, violence should be met with violence. Surveillance of Malcolm X and his family would continue through 1964, when he separated from the Nation of Islam and adopted the Muslim name el-Hajj Malik el-Shabazz.

A week before the February 21 assassination, at an Organization of Afro-American Unity rally in Harlem, Shabazz’s home was firebombed, forcing the activist, his wife and their four children to flee.

The activist declared at the time that the firebombing took place “on the orders of Elijah Muhammad.”