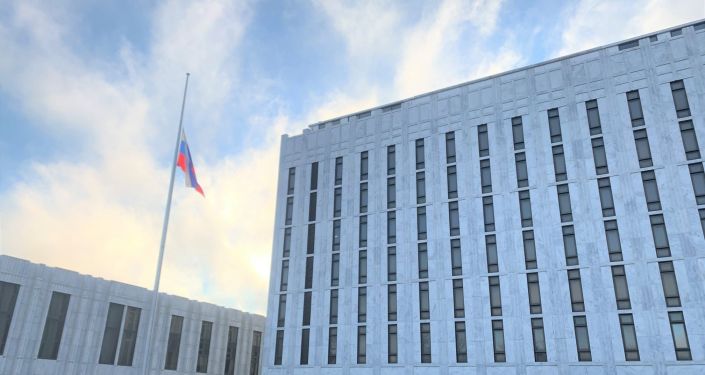 The photo appeared late on Monday on embassy’s official Twitter-account.

“Today our flag flies at half-mast as a sign of solidarity with the American people mourning the loss of more than 500,000 lives claimed by #COVID19 pandemics,” the post reads.

The White House has lowered the US flag to half-mast for five days, until February 26, in honor of those who have died from the coronavirus disease.

The commemoration was ordered by US President Joe Biden, who issued a proclamation on Monday after the COVID-19 death toll in the US reached the grim milestone of 500,000 surpassing the number of Americans killed during World War I, World War II and the Vietnam War combined.

Biden also ordered the US flag to be lowered at all embassies, consular offices and other facilities abroad, including military facilities and naval vessels and stations.

Later on Monday, Biden paid tribute to more than 500,000 Americans killed by the coronavirus pandemic by observing a moment of silence in front of the White House. Accompanied by his wife Jill, Vice President Kamala Harris and her husband Douglas Emhoff, Biden held the vigil at the South Portico of the presidential residence on Monday, where 500 candles were lit – one to mark every thousand of victims.

Russia Ready to Revive Dialogue With EU But Unclear When Bloc Will Be Ready for That, Envoy Says