Queen Decided ‘Long Ago’ Who Could Replace Prince Harry and Meghan as Royal Patrons, Insider Claims 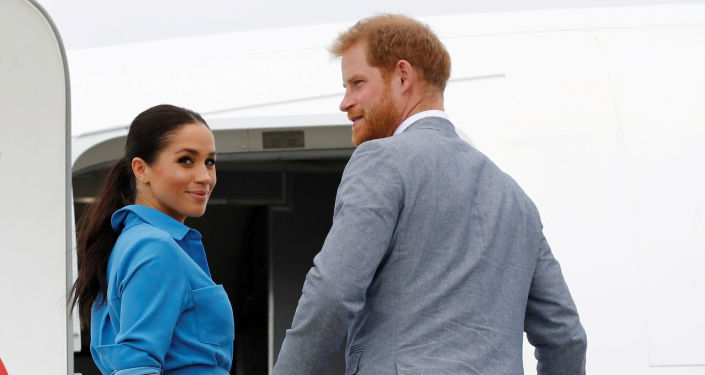 The Queen decided who will take over royal patronages and titles from US residents Prince Harry and Meghan Markle a long time ago, one royal insider told the Mirror, as the newspaper unveiled the names of royal family members who are expected to assume their roles.

It is believed that Prince Edward, the Queen’s youngest son, or his wife Sophie, Countess of Wessex, could take over the National Theatre patronage from Meghan Markle. The Queen held the post for 45 years until handing it over to her grandson’s wife in 2019, a move which many have seen as a sign of comprehensive approval back then.

The Countess of Wessex, 56, is also likely to get Meghan Markle’s post as Patron of The Association of Commonwealth Universities.

© AFP 2021 / GLYN KIRK
Britain’s Prince Edward, Earl of Wessex (L), Britain’s Sophie, Countess of Wessex (2L), Britain’s Catherine, Duchess of Cambridge (2R) and Britain’s Prince William, Duke of Cambridge, wait as Britain’s Queen Elizabeth II (unseen) thanks local volunteers and key workers for the work they are doing during the coronavirus pandemic and over Christmas in the quadrangle of Windsor Castle in Windsor, west of London, on December 8, 2020

Prince William could be the one who takes his brother’s Honorary Air Commandant of RAF Honington in Bury St Edmunds title, the one enjoyed by Prince Harry since 2008.

The Duke of Sussex will lose the position alongside his roles as Captain General of the Royal Marines and Commodore-in-Chief, Small Ships and Diving, Royal Naval Command – a situation which is understood to have taken an emotional toll on the royal, as his friends have previously indicated that he was willing to fight for his ranges.

But is has now been widely reported that Princess Anne, the 70-year-old daughter of the Queen and Prince Philip, will succeed her nephew as Captain General of the Royal Marines.

These claims have not been confirmed by Buckingham Palace but it is believed that the Queen will announce her picks for the key royal patronages in the upcoming weeks.

A royal source told the Mirror that “when the writing was on the wall and it was clear the Duke and Duchess had no intention of coming back into the fold and being part of the team, the Queen made her mind up long ago over her preferred candidates for the roles they vacated.”

The two would still be able to keep their private patronages as the one held by Prince Harry over Invictus Games, that he launched back in 2014 for wounded army personnel, or Meghan Markle’s private roles with animal welfare charity Mayhew and the women-helping organisation Smart Works.

But Harry will also have to step down from his starring roles in the England Rugby Union and the Rugby Football League.

The Palace announced last week that Prince Harry and Meghan Markle, who are now residing in Los Angeles following their decision to step down as working members of the royal family, would not return to the Firm.

“Following conversations with the Duke, The Queen has written confirming that is stepping away from the work of the Royal Family is not possible to continue with the responsibilities and duties that come with a life of public service.”

The statement signalled that all military appointment and patronages enjoyed by the Sussexes will go to other working members of the Royal Family. The couple’s resolve to leave their royal life for good has “saddened” everyone, the Palace maintained, adding that “The Duke and Duchess remain much-loved members of the family.”

The Queen’s decision to deprive her “upset” grandson and his wife from their high-profile statuses have come early that many have expected over the upcoming review of their Megxit arrangement which is due in March.

It also coincided with the couple’s announcement that CBS will soon air their ‘tell-all’ interview with America’s top talk show host Oprah Winfrey – but it’s unclear whether the rush has anything to do with the show, that is expected to highlight Meghan Markle’s personal struggles within the royal realm.

Following the Palace’s release, the couple swiftly responded with a statement sent through their spokesperson that they “remain committed to their duty and service to the UK and around the world”.

“We can all live a life of service. Service is universal,” the two said.

But their tone was regarded by many as a covert demonstration of a deep rift now lying between Buckingham palace and the Duke and Duchess’ California mansion. Prince William was “genuinely shocked” by his brother’s behaviour towards the Queen, insiders told The Times, as the relationship between the two siblings is now believed to be as cold as ever.

Cuba Advises Tourists to Visit Island Without Dollars in Cash