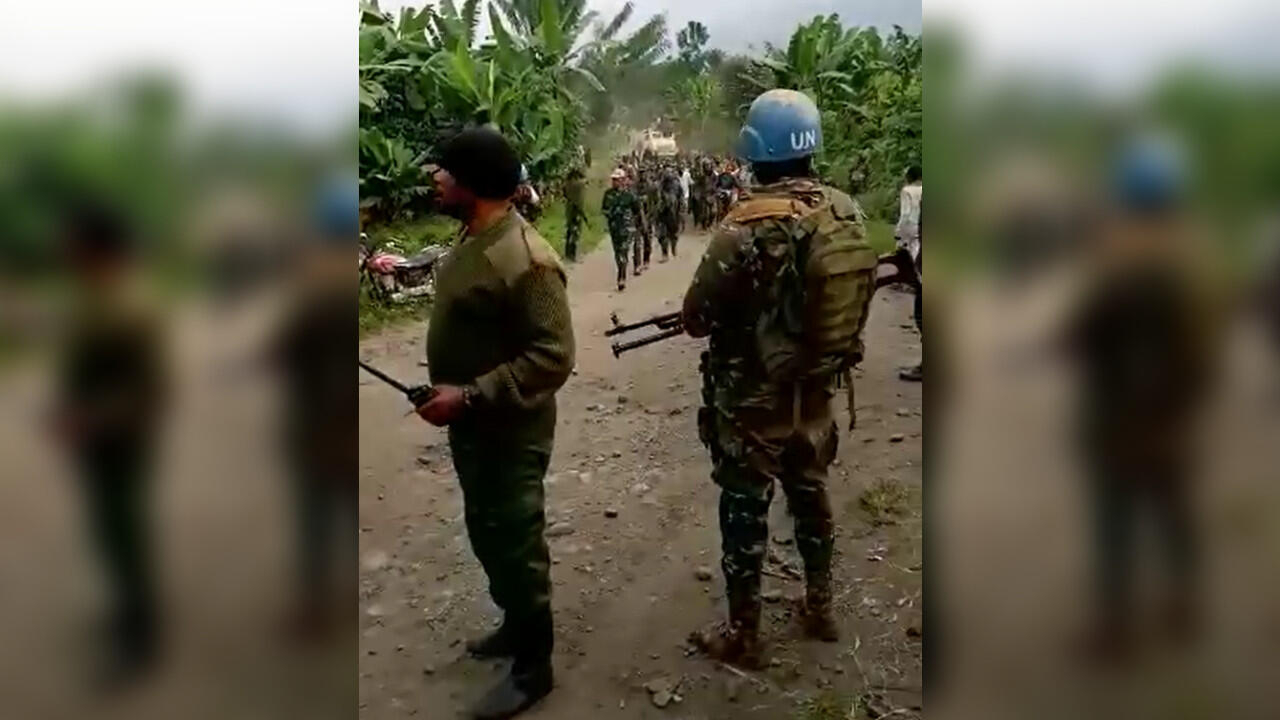 Over the past few months, people in the Congolese city of Mutwanga have been terrorised by a series of horrific attacks by rebel group, the Allied Democratic Forces (ADF). This rebel group, which began in Uganda, has been active in this part of the Democratic Republic of the Congo since 2014. They often target Congolese army posts and have largely held the upper hand. However, a video filmed on February 11 shows the army putting the body of a slaughtered rebel on display—an attempt to reassure the local population that they do, indeed, have the situation under control.

The video, which was widely shared on WhatsApp, shows a group of men carrying a body tied to pieces of wood and decked out in military gear. A crowd cheer and applaud as the men pass. Troops from the UN peacekeeping mission in the DRC, Monusco—easily recognisable from their blue helmets—watch without taking action.

The incident took place on the morning of February 11 in Mutwanga, a town near the border with Uganda that is home to both a Monusco base and a base belonging to the Armed Forces of the Democratic Republic of the Congo (FARDC).

Mutwanga is the capital of North Kivu province in the eastern part of the Democratic Republic of the Congo. It is located about 50 kilometres from the city of Béni.

The night before the video was taken, the town was attacked by the rebel group the Allied Democratic Forces (ADF) for the umpteenth time. This rebel group, which is made up largely of Ugandan fighters, has pledged allegiance to the Islamic State’s Central Africa Province. Congolese soldiers were able to push back the rebels, killing one and capturing two others, according to Radio Okapi, which is financed by the United Nations.

‘We thought the ADF rebels were invincible’

Ricardo Rapenzi, the director of the local radio station Ruwenzori Voice, witnessed the body on display. He told the FRANCE 24 Observers what he had seen:

The incident took place several metres from the Mutwanga military base, which is adjacent to the Monusco base. It’s the body of an ADF rebel who was killed by the Army that you see in the video. He was found near a grave in the village of Kakalali, located about three kilometres from Mutwanga. The ADF fighters had retreated there. His comrades wanted to bury him following Islamic tradition but the army was gaining on them and they had to abandon him.

Locals turned out in large numbers to see the body of the ADF fighter—they wanted to be sure that the Army had indeed gotten the upper hand in the fighting the night before. Very often, the rebels get the better of the soldiers. And when they do and sweep into the villages in large numbers, they loot and pillage, taking goods, goats and food. No one stops them.

As a result, we see the rebels as invincible. Each time the army says that they have halted an attack or killed a certain number of rebels, local people don’t believe it because they don’t see the bodies of those killed. People here often believe that the army talks but doesn’t offer proof of its military feats.

The Army let people get close to the body and even carry it around as a way to re-establish confidence.

‘We let the locals have the body’

The FRANCE 24 Observers team contacted Lieutenant Anthony Mwalushayi, the spokesperson for the Congolese army in Béni. He confirmed that the incident had, indeed, taken place, adding that the body of the rebel had been taken to the military camp and handed over to the Red Cross, which would be in charge of the burial. Jacques Katshishi, the general secretary of the Red Cross in the DR Congo, confirmed this.

The night of February 10, we managed to push back the ADF rebel attack on our positions, just outside of town. There was violent fighting. This body was found next to a grave site because ADF fighters, as a rule, try to never leave the bodies of their commanders on the battlefield.

We transported the body to Mutwanga, where most local people live. When we got to town, we let the locals have the body so they would realize that the rebels truly had lost.

It’s important because local people don’t believe the statements made by the army. It’s incredibly difficult to convince them if they haven’t seen the actual bodies of those killed. Many have fallen for fake news items claiming that the army is complicit in the rebellion, especially as many rebels wear military fatigues. That’s not true, though.

The army is doing a lot in order to bring down the ADF. But our biggest difficulty is getting information on the enemy, which blends in easily with the local population. Today, the ADF threat is only at the Ugandan border, in difficult to access zones.

>> Read on the Observers: What do we know about Islamic State group in the DR Congo?

The ADF began in Uganda as a rebel group hostile to Ugandan president Yoweri Museveni. They retreated into the eastern part of the Democratic Republic of Congo in 1995. This armed group, which is one of the most violent in the region, is accused of killing around a thousand civilians in the Béni region since October 2014.

Thousands protest in Tbilisi after arrest of Georgian opposition leader

Indonesia races to find missing submarine with 53 crew members aboard