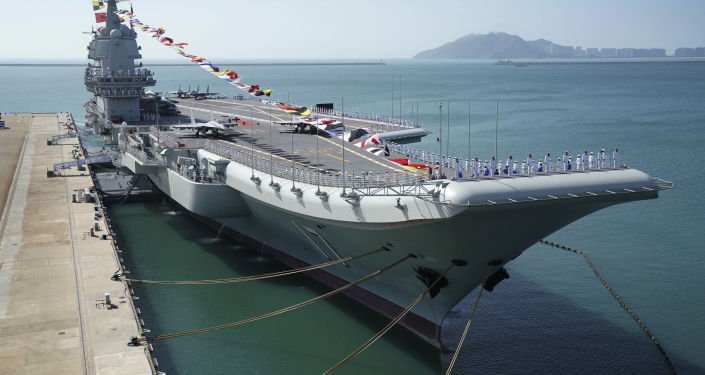 Local residents on the ground were able to take pictures of the KJ-600 during its flight, CCTV reported.

It is a medium-sized early warning aircraft with two engines similar to the US’ E-2 Hawkeye series, said Song Xinzhi, a Chinese military expert, in the CCTV program.

When asked by a CCTV anchor if the KJ-600 can operate on China’s current aircraft carriers, the Liaoning and the Shandong, Song denied the possibility, saying that the two carriers use ski-jump ramps to assist takeoffs by aircraft, but this requires very powerful engines to provide enough thrust, and the KJ-600 has not been equipped with these engines.

Even the US’ E-2 Hawkeye can only operate on large aircraft carriers that use catapults to assist takeoffs, because the flight deck of a carrier is too short for such aircraft to take off with only the assistance of a ski-jump ramp, Song explained.

This means the KJ-600 is designed to also operate on a large aircraft carrier equipped with catapults, Song predicted.

Chinese and foreign media have speculated for years that China’s third aircraft carrier, which is under construction in Shanghai, will feature electromagnetic catapults.

It remains theoretically possible for a fixed-wing early warning aircraft to take off and land on an aircraft carrier without catapults, but this would likely force the aircraft to use less fuel to reduce weight, giving it less range and endurance, a military expert who asked to remain anonymous told the Global Times on Monday. “The question is, is it worth it?”

Previous reports indicate that the KJ-600 made its maiden flight in August 2020.

This article originally appeared on the Global Times website.