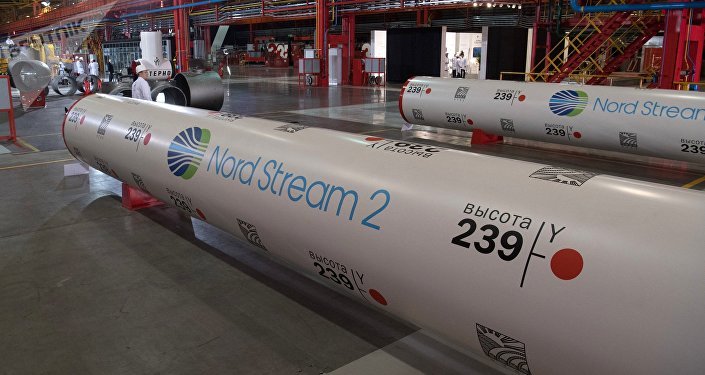 Washington’s allies in Eastern and central Europe are reportedly increasingly concerned that President Joe Biden is not displaying a willingness to fight hard to stop a Russian-Western European energy project, the Nord Stream 2 pipeline, from being completed.

On Monday, a source close to Ukrainian President Volodymyr Zelensky was cited by Axios as saying:

“The Ukrainians are a bit disappointed that President Biden did not commit during the Munich [Security] Conference to use every tool in his power to stop Nord Stream 2.”

The source was cited as adding, however, that it is “not too late… for the US to take decisive action, and the Ukrainians are hopeful the Biden administration will do so.”

The comments follow a joint public statement made earlier, on 22 February, by Polish Foreign Minister Zbigniew Rau and his Ukrainian counterpart Dmytro Kuleba.

The two officials penned an op-ed in Politico Europe to urge Joe Biden to do everything in his power to block the construction of the pipeline, warning that Russia was strengthening “its grip on Europe’s gas supply”.

Underscoring that “Poland and Ukraine have long warned against the dangers associated with the construction of Nord Stream 2”, they wrote:

“Our calls for vigilance and boldness were heard in the US Congress, which pressed on with measures designed to stop this dangerous, divisive project. We call on US President Joe Biden to use all means at his disposal to prevent the project from (reaching) completion.”

The two officials also asserted that Washington continues to play “a critically important” role in the project, which is “not about the energy security of Germany”.

“The Biden administration is committed to using all available tools to counter Russian malign influence and to support transatlantic energy security goals. We have been clear that companies risk sanctions if they are involved in the Nord Stream 2 project. We continue to examine entities involved in potentially sanctionable activity.”

Earlier, on 19 February, the State Department submitted a mandatory report to Congress that was supposed to list all the vessels involved in Nord Stream 2 construction, as well as any insurance firms or other companies involved in the pipeline.

The State Department in a report to Congress didn’t name new companies as targets for sanctions related to the Nord Stream 2, allowing work on the Russian pipeline to continue unabated for now. https://t.co/sKp4Yf1p3X

​However, the report failed to name any new companies targeted for US sanctions, according to the Wall Street Journal. Republican Senator Jim Risch of Idaho, member of the Senate Foreign Relations Committee, slammed the report as incomplete.

“Maritime tracking information makes it clear that ships not covered in today’s report are currently active in supporting Nord Stream 2 construction,” he said, while demanding an “immediate explanation” from the Joe Biden administration, which earlier referred to the pipeline as a “bad deal”.

On Friday last week, the Biden Cabinet introduced another set of sanctions against the Russian-flagged vessel constructing Nord Stream 2, Fortuna, and the ship’s owner KVT-RUS under Protecting Europe’s Energy Security Act (PEESA) in addition to the Countering America’s Adversaries Through Sanctions Act (CAATSA) used against them earlier, under then-president Donald Trump.

However, no new sanctions have been rolled out by the State Department.

Nord Stream 2, a project that entails the building of a 745-mile-long twin pipeline that will carry up to 2 trillion cubic feet of gas annually from Russia to Germany, is expected to be finished by late 2021 at the very latest.

It will be able to pump up to an additional 55 billion cubic meters of gas per year to Europe along the bottom of the Baltic Sea, bypassing Ukraine, thus doubling the capacity of the existing Nord Stream network that was completed in 2012.

The Nord Stream 2 passes through the territorial waters or exclusive economic zones of Russia, Sweden, Denmark, Finland, and Germany.

The project has been actively opposed by the US, with Washington seeking to promote its own liquefied natural gas (LNG) to the EU. Other opponents have included Ukraine and a number of EU countries, including Poland.

The US introduced two rounds of sanctions against the energy project, with the first announced in December 2019. At the time, a major Swiss pipe-laying company, Allseas, pulled out of the project, freezing construction temporarily and prompting Gazprom to resort to using Russian ships.

The second round of sanctions came into force on 1 January 2021, prompting some insurers and certification companies to pull out, while overall having no impact on the actual construction.

Both Moscow and Berlin, which has been under increased pressure by Washington over its role in the project, have repeatedly denounced the sanctions as an example of unfair competition.

Russia has denounced attempts to politicise what it describes as a purely economic project.

Meanwhile, on 14 February Russian Deputy Prime Minister Alexander Novak announced that Nord Stream 2 was over 95 percent finished, and said the Russian side was “confident that, despite the destructive approaches that we observe from the US side, which…are delaying the implementation of this project, it will be completed.”

Who’s That?! Cat Gets Frightened When She Runs Into Her Little Copy