A Year After Delhi Riots Residents Still Live in Fear 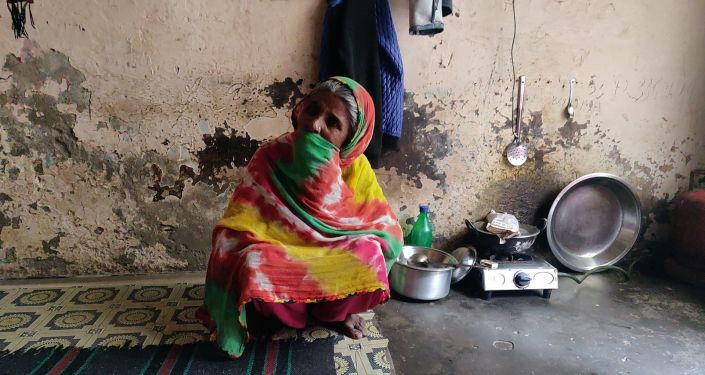 Twelve months after Delhi was rocked by the violent riots, the city’s residents still live in fear. Many witnessed arson, looting, and angry marauding mobs who were protesting against the controversial Citizenship Amendment Act (CAA) that allows non-Muslim migrants to become Indian citizens.

The Parliament cleared the CAA to enable “persecuted” Hindus, Sikhs, Christians, Buddhists, Jains, and Parsis from Pakistan, Bangladesh, and Afghanistan to seek citizenship. The law, however, excludes Muslims, which continues to anger many people who claim it’s discriminatory and unconstitutional.

The Narendra Modi government, though, argues that the CAA doesn’t affect Indian nationals, including Muslims.

A year after the violent riots, Sputnik visited northeast Delhi to see how life has changed over the past 12 months in the worst-affected areas. Back then, mosques, schools, houses, factories, and shops were set ablaze.

While most of the properties have been rebuilt, a sense of fear still lingers.

Pankaj Saini, a Hindu grocery shop owner in the Chaman Park area of northeast Delhi’s Karawal Nagar  – one of the riot-hit areas – shared what his life looks like after the violence and why he wants to move out of the area dominated by Muslims.

“As the riots started, the first thing that I assured was the safety of my family. So, we moved to a nearby locality. For the next 10-15 days, we had no contact with anyone in the area,” he recalls.

“I fear that things can get out of hand any time, and I or my family might get targeted as something unexpected can happen. So, in a month or so I’ll move out of this area for the safety of my family,” Saini explains.

Another shop owner living in the area mentioned that due to politicians, the areas which witnessed deadly clashes last year remain a hotspot for violence.

“It’s just a matter of one small scuffle which would turn into a communal anger. We fear every day of being attacked or picked up by the police. As we belong to the minority (Mulisms), we can be easily targeted,” Mohammad Farhaan, a tailor in the Jafrabad area, says.

He, however, adds that resident Hindus still avoid visiting his shop in the wake of the riots.

Anil Sharma is another resident who once owned three shops but they were set on fire, killing 20-year-old waiter Dilbur Negi who was trapped inside. Police said his body was dismembered before being burnt.

Ambuj Rawat, another waiter working in Sharma’s shop told Sputnik the store was reopened on 16 March 2020, almost 20 days after the riots. However, it took more than six months to rebuild the shop.

“I was not feeling well that day. Around 2 pm, I gave 50 rupees ($0.70) to my eldest son Jameel Mohammad to buy some milk. He used to work as a labourer,” laments Noor Jahan. “But that day he never returned.”

Jameel is survived by his wife, two daughters, and two younger brothers. “We received his body eight days after his death. He had a slit on the throat and mark on the head,” says Naseem Mohammad, Jameel’s brother.

​The family left the area last March and returned in November as they had spent all their savings. Today, Jameel’s widow and daughters receive monthly support from a Muslim organisation as  compensation.

The entire family is living in hope that one day police will arrest the culprits and they will be punished by law.

More than 30 Hindu and Muslim families who fled the violence now live in temporary shanties on the roadside in Shiv Vihar. Most are either blacksmiths or rag pickers. Sputnik visited one such shanty.

“The worst-hit aftermath of riots is of those who live on the street,” says 36-year-old Natto Singh. She added that she escaped the area on 24 February last year.

© Sputnik / Deexa Khanduri
A homeless family living at the temporary shanties in Delhi a year after the worst communal violence in the Indian capital.

Natto said most families headed towards northeast Delhi’s main ring road (around two kilometres away) and took shelter on the pavement for about 20 days. “By the time we came back, our shanties were burnt. But we had no other place to go,” she says.

Although all the families living in Shiv Vihar Street received 25,000 rupees ($345) as assistance from the government, it “ended during the coronavirus induced lockdown by the government,” shared Natto Singh, who has three children.

People living at road were the most hit. 12 months after the riots, these people don’t have tarpaulin sheets to cover their hut.
They also loaned upto one rupees to re-start their live.
No leaders came to them.
#DelhiRiots2020 pic.twitter.com/VW4J8vn4rk

She says her 10-year-old daughter Pooja has since stopped going to school. “We can sense the tension in the environment. Now, Muslims people don’t buy our stuff or even donate us food like earlier days,” she added.

A year after the deadly clashes in north-east Delhi, the Delhi Police have closed the cases in 400 of the 755 police complaints filed.

Speaking to Sputnik, a senior police official revealed they have arrested over 1,753 people so far, 1,204 of whom are still in jail while they have filed at least 342 charge sheets against 1,553 people.

Not one single case has gone to trial yet, despite the police maintaining that they have left no stone unturned in pursuing all complaints.

Meanwhile, data from the district courthouse in Delhi shows a total of over 4,300 riot-related bail applications have been processed in the last one year alone, even as the Delhi Police say they had arrested only about 1,700 people, of which only 544 have been granted bail.

Until the end of 2020, police said they had arrested 820 Hindus and 933 Muslims, including five juveniles.

Biden Says US Airstrikes in Syria Are Telling Iran ‘You Can’t Act With Impunity, Be Careful’