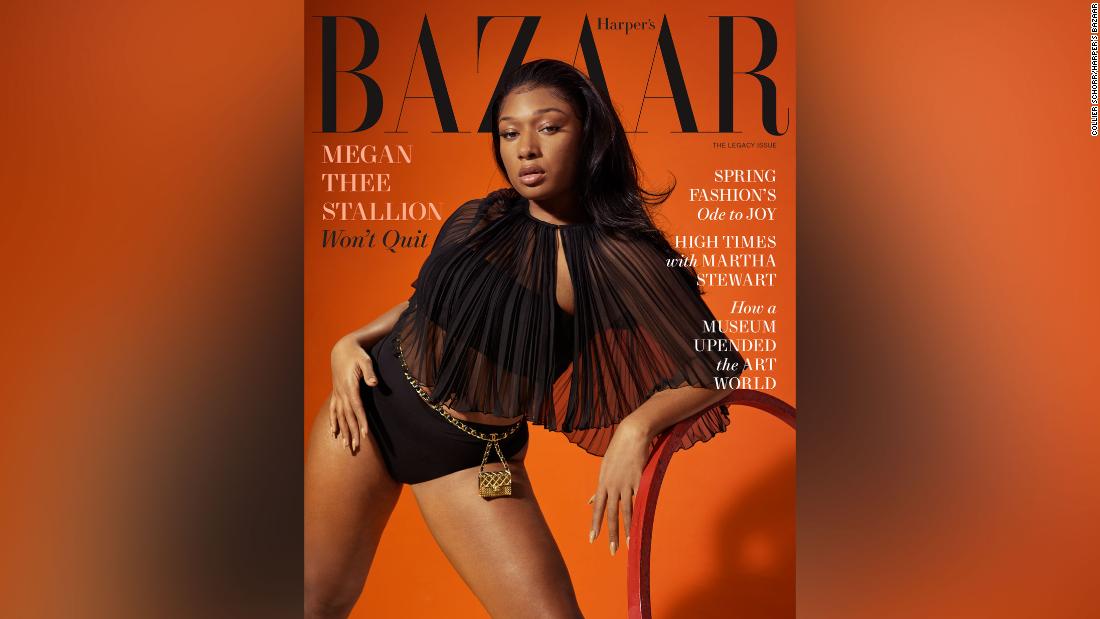 Megan Thee Stallion has graced the cover of countless magazines. But her appearance on the front of Harper’s Bazaar marks an important stride toward diversity in the world of fashion.

At only 26 years old, Megan Thee Stallion has already taken the music industry by storm. She was named one of Time’s 100 most influential people; won Best Hip Hop Video for her song “Savage” at MTV’s 2020 VMAs; topped the Billboard 100 chart with “WAP,” a collaboration with Cardi B; and even worked with Beyoncé.

Megan Thee Stallion has also become a sex and style icon, joining a Savage x Fenty campaign and inking a deal with Revlon.

But Megan Thee Stallion doesn’t need anyone to praise her accomplishments or her beauty.

In fact, she’s unabashedly proclaimed herself a “hot girl” — a mantra that she invites women of all skin colors and body types to own and celebrate. Megan Thee Stallion, herself, is a curvy Black woman.

It’s part of what makes her appealing to so many people, and an unlikely choice of model to feature on the cover of Harper’s Bazaar.

The iconic fashion magazine — like the industry it covers — typically showcases very rigid and mainstream standards of beauty.

But under the leadership of Samira Nasr, the first Black editor-in-chief in the magazine’s 153-year history, things are starting to change.

Nasr was tapped to lead Harper’s Bazaar in June and almost immediately laid out her vision for the magazine.

In an Instagram video posted last year by the Hearst Corporation, the magazine’s parent company, Nasr talked about her unique background and desire to bring diversity to the pages of Harper’s Bazaar.

“As the proud daughter of a Lebanese father and Trinidadian mother, my worldview is expansive and is anchored in the belief that representation matters,” Nasr said.

“My lens by nature is colorful, and so it is important to me to begin a new chapter in Bazaar’s history by shining a light on all individuals who I believe are the inspiring voices of our time.”

Nasr, who was previously the executive fashion director at Vanity Fair, said it was her goal to “give all voices a platform to tell stories that would never have been told.”

She also offered a message of solidarity to the protesters who took to US streets last summer following the police killing of George Floyd in Minneapolis.

“I see you, I thank you and I hope we can join forces to amplify the message of equality because Black lives matter,” she said.

It was a message not lost on people of color who have long accused the fashion industry of bias and discrimination.

Less than a year later, Nasr put Megan Thee Stallion on the cover of Harper’s Bazaar, and even styled the artist herself.

‘Can’t nobody tell me how to be the Hot Girl’

Megan Thee Stallion appears on the magazine’s two covers. In one, she wears a black Chanel cape, top and brief; black and gold Chanel belt; and Bulgari earrings.

In the other, she dons a Saint Laurent by Anthony Vaccarello jumpsuit and choker.

“Hot Girl Meg,” one of her many nicknames, wore minimal makeup throughout the shoot — which also features her in Balenciaga, Dior and Valentino, with photographer Collier Schorr.

In the cover story, “The Importance of Being Megan Thee Stallion,” the rapper explains why she decided to keep things simple.

“I’m realizing that I don’t have to be in full glam every time you see me, because I’m just getting more comfortable with myself and more comfortable with my skin,” she said in the interview. “I know that I’m a person that everybody looks to, and they’re like, ‘Oh, Megan, she’s a confident woman. She’s so strong.’ But you have to go through things to become that person.”

Some of those “things” include losing her beloved mother and great-grandmother in March 2019. She credits them for inspiring her to attend Texas Southern University, where she’s in her last semester studying health administration. “Before my mom passed, she really would be on my butt about getting my degree,” she told the magazine.

Megan Thee Stallion’s sex-positive lyrics have also been called too graphic and even vulgar. California politician James Bradley described “WAP” as “what happens when children are raised without God and without a strong father figure.”

Despite criticism, she has become an advocate for Black women and spoken against gun violence and police brutality.

During a “Saturday Night Live” performance in October, she slammed Kentucky Attorney General Daniel Cameron for his decision to not seek murder charges in the police killing of Breonna Taylor.
Later that month, she wrote an opinion story for The New York Times in which she touched on her own experience as a victim of gun violence and said Black women “deserve to be protected as human beings.”

“And we are entitled to our anger about a laundry list of mistreatment and neglect that we suffer,” she added.

Megan Thee Stallion hasn’t wavered in her beliefs, and continues to invite fans to join her in advocating for equality and diverse representation in all aspects of society.

It’s a message that even old-school fashion magazines can no longer ignore.

“Can’t nobody tell me how to be the Hot Girl,” she told Harper’s Bazaar.

Consumer prices keep on rising. Where does it end?