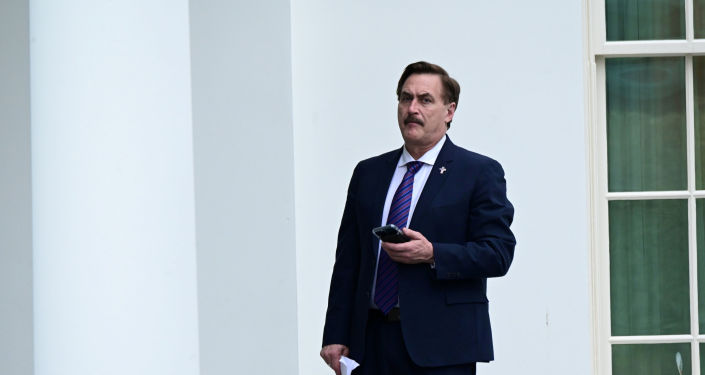 Dominion launched its case against Lindell on Monday, claiming he launched a “defamatory marketing campaign” against it, Axios reported.

“Lindell’s statements have exposed Dominion to the most extreme hatred and contempt,” the firm wrote in its 115-page complaint. “Lindell himself called it the ‘biggest crime ever committed in election history against our country and the world’,” it added.

“Acting in concert with allies and media outlets that were determined to curry favour with one of their biggest sponsors and to promote a false preconceived narrative about the 2020 election, Lindell launched a defamatory marketing campaign about Dominion that reached millions of people and caused enormous harm to Dominion,” the voting machine maker alleged.

Conservative media commentators and websites responded in solidarity with the pillow tycoon, encouraging readers to buy from his company. Lindell has even offered discount promotion codes to their audiences.

“I want Dominion to put up their lawsuit because we have 100 per cent evidence that China and other countries used their machines to steal the election,” Lindell told Axios in January after receiving a cease-and-desist demand from the firm.

Dominion is also suing Trump’s personal attorneys Rudy Giuliani and Sidney Powell for the same amount of $1.3 billion each, while earlier this month Smartmatic sued Giuliani, Powell, Fox News and some of the network’s hosts for $2.7 billion.

Trump, his lawyers and supporters have claimed that Dominion’s machines and and Smartmatic’s software had “backdoor” access routines that allowed corrupt officials to alter voting tallies.

Smartmatic also provided the software for the 2017 election to Venezuela’s National Constituent Assembly. The firm’s Venezuelan-born founder and CEO Antonio Mugica later flew to London for a press conference in which he claimed the National Electoral Council (CNE) had used his programmes to alter the results by around one million votes to hand victory of the ruling United Socialist Party (PSUV) — even though the main opposition parties had guaranteed their own defeat by boycotting the election.

Joe Biden Signs Order to Avoid US ‘Chip Crisis’ But What Caused the Global Semiconductor Shortage?