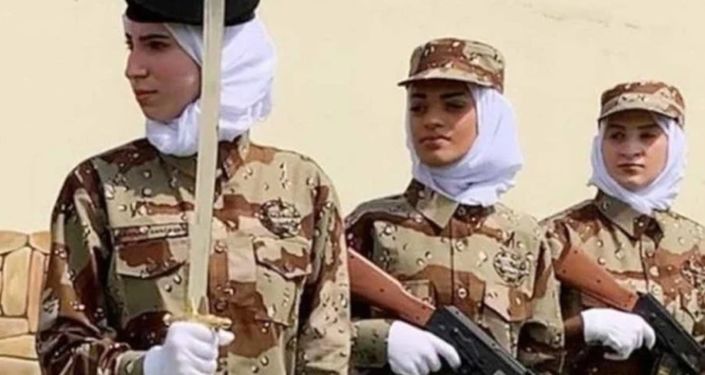 “In my personal opinion, it is very important for women to be in the military, where they can have an active role in our conservative society,” IT specialist Rhama al-Khayri told the outlet. “Throughout history, we have not heard of a woman who came to the field and fought,” she said. “We always hear about women healing people, or perhaps monitoring supplies in the administration and in the control units. The man is the one who fights in the field.”

“That includes releasing political prisoners such as women’s rights advocates,” Psaki said, tying the Biden administration’s renewed confidence to the February release of Saudi Americans Salah al-Haider and Bader al-Ibrahim, both of whom were jailed in 2019 and slapped with terrorism-related charges.

Days after the press conference, prominent women’s rights activist Loujain al-Hathloul was also released by Saudi authorities. The activist was arrested in May 2018, following her work with the ‘Women to Drive’ movement, which included videos of her illegally operating a motor vehicle.

While the ban was lifted via Saudi Crown Prince Mohammed bin Salman’s September 2017 order, women were not officially granted the right to drive until new guidelines were drawn up and implemented in June 2018.

Months following the permittance, economist Saad al Dusri told Sputnik that “Saudi women have been driving have contributed to the economic growth of the kingdom,” as car dealers, workshops, insurance companies, and banks receive additional money.

Martin Hvidt, associate professor at the Centre for Contemporary Middle East Studies, concurred that “economic necessity” was a motivating factor for the lifting of the ban. Hvidt also suggested there “will be a gradual change in the role of the woman” in Saudi Arabia.

Months later, Riyadh amended national regulations, allowing adult women to register for marriage or divorce and travel without the approval of their husband or male relative.

US to Move Forward With Re-Opening US Consulate in Jerusalem, Blinken Says