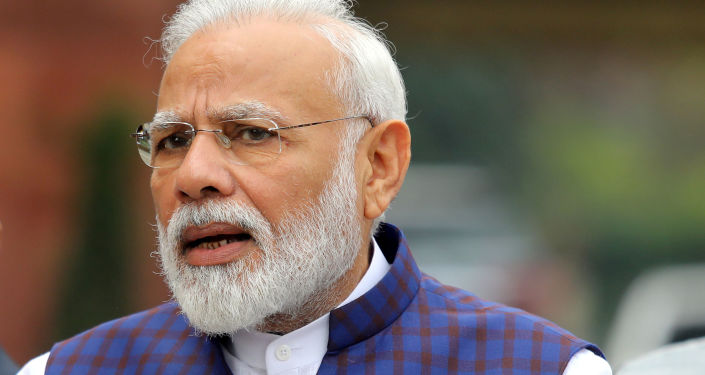 Indian Prime Minister Narendra Modi has asked his country’s defence manufacturers to focus on countries which are worried about their security in the present geo-political world. Speaking with manufacturers on Monday, Modi said that more than 100 pieces of defence equipment have been banned from import and more items will find their way on to this “negative list”.

“In this changing geo-political scenario, smaller countries are facing newer challenges. Now, these countries are worried about their security and national security has become a major issue for them. These smaller and poorer countries will look towards India for their security needs because we can produce good-quality products at a lower cost,” Modi said while addressing defence manufacturers on Monday.

At present, Modi said, India exports defence products to more than 40 countries adding that these exports include low-value ammunition, spares, aerospace components and naval equipment such as sonar.

Earlier in the day, Indian defence minister Rajnath Singh said that the Ministry of Defence has set a target of $25Bln turnover including $5Bn exports in aerospace and defence goods and services by the year 2024. India also planned to spend $130Bn on military modernisation in the next five years.

To achieve the ambitious $5Bn target for exports, the Indian Ministry of Defence cleared 156 defence items for export, including some of country’s most advanced weapon systems such as BrahMos supersonic cruise missiles, the Advanced Towed Artillery Gun System (ATAGS), Pinaka multi-barrel rocket launchers, and the Combat Management System. Indian government has told its defence attaches posted to embassies around the world with finding opportunities to supply their host country with Indian military equipment.

Data from the Stockholm International Peace Research Institute (SIPRI) shows that Bangladesh, the Philippines, Vietnam, Indonesia, Singapore, and Taiwan have invested massively in military modernisation in recent years; in the past decade, military spending by Bangladesh has jumped 81 percent, 60 percent in Indonesia and more than 25 percent in Thailand and the Philippines.

India’s concerns in the region have grown considerably in recent years as China and Pakistan have been marketing their JF-17 fighter jet to low-income countries whereas New Delhi eyes countries which have any sort of marine dispute with Beijing.

India scored a major export win last year when it gave the diesel-electric submarine INS Sindhuvir – renamed UMS Minye Theinkhathu – to Myanmar as part of its strategic outreach to the country.

India is also in advanced talks about selling its BrahMos supersonic cruise missiles to the Philippines.

The Narendra Modi government has been offering loans to allies such as Mauritius, Bangladesh, Myanmar, the Maldives and Sri Lanka to buy Indian defence equipment.

​On Sunday, the Indian government announced $50Mln loan to the Maldives for naval purchases and on Monday a loan worth about $100Mln was offered to Mauritius.

Last Month, India and Bangladesh discussed the operationalisation of a $500Mln loan with which New Delhi is likely to supply Dhaka with “kinetic and non-kinetic equipment”.

In order to resist China’s growing influence, India had also announced a $20Mln loan facility to the Comoros Islands in the Indian Ocean off the East coast of Africa to be used on high-speed interceptor boats.

The Empire is Crumbling