Is UK-EU Shellfish Spat a Divorcees’ Squabble or Beginning of ‘Guerrilla Trade War’? 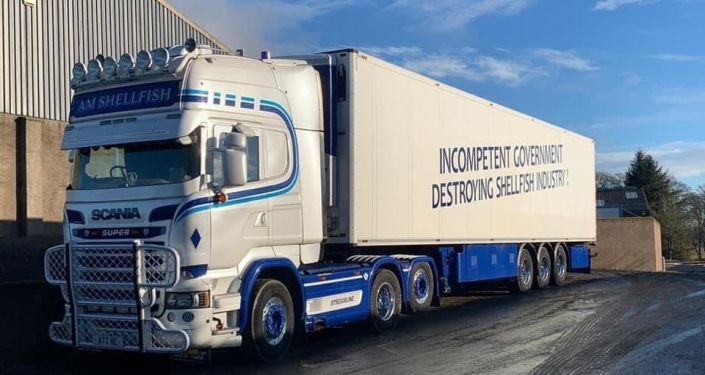 The UK-EU shellfish row erupted earlier this month after Brussels banned the export of live mussels, oysters, clams, and cockles from Britain’s “Class B” waters. In accordance with the bloc’s rules, live bivalve molluscs that are landed from “Class B” waters cannot be exported from third countries to the EU unless they are depurated beforehand. Other shellfish, including langoustines, crab, and lobster are not affected by the regulation. Although bivalve molluscs caught in “Class A” waters don’t require additional purification, most UK waters do not fall into that category.

Following the UK’s pull-out of the European market, British fishermen have only been able to export pre-purified shellfish to the bloc accompanied by health certificates. According to the media, Britons expected that the hiatus was temporary and would end after the introduction of a new EU import certificate in April 2021.

However, in early February, the European Commission announced that the restriction would become permanent covering both farmed and wild molluscs. Commenting on the matter, UK Environment Secretary George Eustice told journalists that the move threatens to “devastate” the British fishing industry.

“What makes it feel weird obviously is that the EU-UK trade deal is the first one in history that negotiates a reduction of access to each other’s market”, says Dr Renaud Foucart, senior lecturer at Lancaster University Management School. “So everything we used to be allowed to do and are suddenly forbidden to do looks strange, and certainly unfair to people working in the fishing industry”.

​While fishermen may try to comply with the new regulations by processing and purifying their catch, this can prove costly and time consuming. Although the market for live bivalve molluscs is relatively small, being estimated at less than £12 million ($16.8 million) a year, it remains the main livelihood for some British fishers.

As an EU member, the UK was party to the ban on importing shellfish from 3rd countries. For a decade, UK suppliers did very nicely. Now outside the EU, the UK is subject to that ban. The Govt knew this was an inevitable consequence of Brexit. It has no grounds for complaint.

​The unfolding situation appears to be a war of words addressing the UK and EU domestic audiences, with Brussels showing that it can be really tough, and London shuffling off the blame for the hastily concluded trade deal on to the “bullying” EU, according to the academic.

It is unlikely that the latest EU-UK row will evolve into a real trade war, Foucart believes. While seeking an exception to EU rules, the UK is threatening “to unilaterally decrease market access to EU producers”; however, by definition, this can only be very limited, and will not lead to the imposition of tariffs, according to the senior lecturer.

© AP Photo / Alastair Grant
Police speak to shellfish export truck drivers as they are stopped for an unnecessary journey in London, Monday, Jan. 18, 2021, during a demonstration by British Shellfish exporters to protest Brexit-related red tape they claim is suffocating their business.

‘British Patience Will Not Last Forever’

However, British officials appear to look at the situation through a different lens, viewing it as part of broader post-Brexit frictions with the EU. Citing the latest shellfish row, a senior British minister told the Daily Mail on Sunday: “The triumph of our vaccine programme has led to this petty revenge”.

In January, the UK and the EU crossed swords over COVID vaccine supplies, with Brussels implementing export controls on jabs to address delivery shortfalls. EU officials even went as far as to vow to invoke Northern Ireland Brexit emergency powers to bar exports of COVID drugs from crossing the Irish border into the UK. Eventually, Brussels reversed its plan following an outcry from London, Dublin, and Belfast.

Earlier, the bloc exerted pressure on British-Swedish pharma firm AstraZeneca over the latter’s inability to deliver promised vaccines to the EU by March and demanded that it divert supplies from its British sites to continental Europe. Some EU states considered bringing the pharma giant to court.

“We are already in the early stages of a guerrilla trade war with the EU”, suggests Kevin Dowd, professor of finance and economics at the Business School at Durham University in the UK. “The fundamental issue is that the EU is openly hostile to the UK and makes no secret of its desire to punish the UK for Brexit. I think the UK is slowly waking up to that realisation and it should act accordingly”.

Instead of being reasonable towards the UK and operating in good faith, Brussels “consistently chooses not to”, the economist notes. Touching upon the reported “Water Wars”, the academic presumes that “taking retaliatory measures is exactly what is needed”, adding that “otherwise the EU has little incentive to refrain further measures to hinder UK exports to the EU”.

Tory MP says UK should board EU boats if Brussels doesn’t ditch shellfish ban https://t.co/8vptz5rzm7 At last we have a MP standing up for the industry @sheryllmurray thank you. Who will be the brave MP that stands up and ask when will The 1988 Merchant Act be reinstated.

​”In the EU context, ‘middle ground’ typically means giving in to EU demands”, he says. “There are situations where middle ground should be sought, but this isn’t one of them”.

The professor suggests that the UK needs to scrap the Northern Ireland Protocol, in an apparent reference to last month’s attempt by Brussels to weaponise the document against Britain: “In any case that Protocol violates the Good Friday Agreement which is an international treaty and must not be violated”, he remarks. “But EU politicians don’t give a damn about Ireland”.

“London has been cool-headed so far, but it would be foolish to think that British patience will last forever”, Dowd warns.

The academic insists that the guiding principle is that “the UK is a sovereign state and the EU should respect that sovereignty”. “With Lord Frost now taking the lead on the UK side of discussions with the EU, one hopes that the UK government will now take a more robust position than it has done so far”, he concludes.