Neil Lennon has apologised to Celtic’s supporters after a 1-0 defeat at Ross County all but ended their slim Scottish Premiership title defence.

Lennon admits his side “let the fans down” as they stumbled again in their forlorn pursuit of 10 in a row.

“I apologise. It wasn’t for the want of trying,” he told Sportsound.

“The players were putting in the effort, but it wasn’t good enough.”

Celtic dominated possession but created little on another dispiriting night for the reigning champions.

They are left trailing Rangers by 18 points with eight games left.

That means that – regardless of Celtic’s results – Gerrard’s side will guarantee the title with a draw in the Old Firm game on 21 March if they win their next two matches against Livingston and St Mirren.

However, they could win it as early as 6 March, if Celtic lose to Aberdeen next Saturday.

“It’s a strange one,” said Lennon of the defeat. “It encapsulates our season. It’s another poor goal from a set piece. But I think we played well tonight and did enough to win the game.

“The goal is inexcusable. Our defenders don’t seem to want to defend this season. We do the work on the training pitch but if the players don’t attack the ball there’s not much you can do.

“It’s been a running theme for us this season for whatever reason. It’s hugely damaging.”

Despite the defeat, Lennon maintained his stance that he wants to continue to lead Celtic, and says the club need to rebuild.

“So far I’ve not been told anything otherwise,” he said when asked about his future. “I love this job, I love the club. This has been a difficult season but you always want to rebuild and go again.” 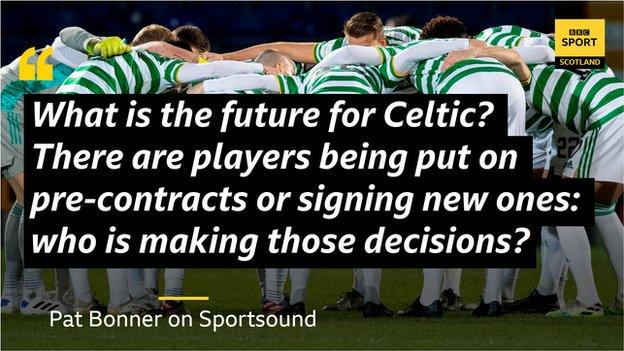 Neil Lennon is a big part of Celtic history and I do feel sorry for him but even though he has done great things at Celtic that doesn’t help him right now. He knows it himself that he’s on borrowed time.

He was playing for his credibility from now to the end of the season, but it’s all about the leadership and what decisions they make at board level. They need to come out with a clear plan soon.

What is the future for Celtic? There are players being put on pre-contracts or signing new ones, who is making those decisions? Is it the new or old CEO? What happens to Neil Lennon? This next six months are critical for Celtic.