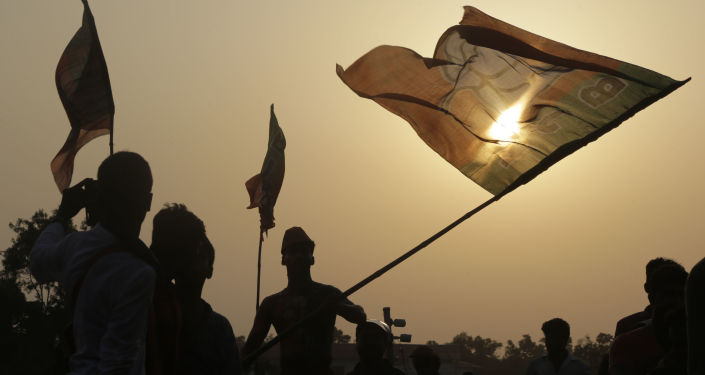 The Delhi Police have arrested climate activist Disha Ravi, lawyer Nikita Jacob, and engineer Shantanu Mulu in connection with the “toolkit” case. According to the police, the three individuals allegedly took part in creating the Google doc that provided a roadmap for coordinated protest actions both on social media and on the ground to exert pressure on the Indian government. Citing a senior Delhi Police officer, the Indian Express reported on 18 February that editors of the document apparently include UK and India-based members of the environmental group Extinction Rebellion (XR), as well as a co-founder of the Poetic Justice Foundation, a Canada-based pro-Khalistan group.

Disha Ravi, Nikita Jacob, and Shantanu Mulu represent a mindset which differs from the mainframe of Indian society, says Amrita Dhillon, an Indian foreign affairs analyst and founding editor of The Kootneeti, a New Delhi-based publication.

“They are not related directly to any political affiliation but obviously not in favour of the ruling party (BJP)”, Dhillon points out. “More so, their political motto could be garnishing and nurturing the base of opposition parties in India on the lines of the global call for freedom and free speech. But, in the Indian context, Article 19, gives freedom of expression but also limits it by its subsection (C), to maintain harmony in the society. In this critical and entangled present scenario, ‘toolkit’-like kinds of stuff will further deteriorate the virtues of protesters and will severely damage the peace conditions multifold”.

The document shared by Thunberg on Twitter was titled “Global Farmers Strike – First Wave”. Having shared it on 3 February, Thunberg then deleted it and later tweeted a link to an “updated” shorter version of the file.

However, the Indian Express, which analysed the original “toolkit”, pointed out that in the Prior Action section of the document, potential participants of the campaign were asked to share “solidarity photos and video messages” with a specific email ID, “preferable by 25 January”; launch a “tweet storm” on 23 January; and organise on-ground protests “near Indian Embassies, government offices, media houses (or even Adani-Ambani offices) globally” on 26 January.

The Delhi Police suggested that the sequence of events in the farmer protests in Delhi, which abruptly turned violent on 26 January, was a “copycat” of the alleged action plan outlined in the “Global Farmers Strike – First Wave” document.

The toolkit’s urgent actions section called upon those interested to trigger a new “tweet storm” on 4 and 5 February, share solidarity pics and videos, and kick off “on-ground” protests “near the closest Indian Embassy, Media House or your local government office on 13 and 14 February”.

In the section “More Information — Important Links”, one of the links led to a website run by “a volunteer group of individuals in Canada, the USA and the UK, who are passionate about social justice issues affecting the Indian agricultural community”.

Greta’s deleted tweet also mentioned the Twitter accounts of two groups: Fridays For Future India, part of the international climate movement Fridays for Future (FFF), and Extinction Rebellion (XR) India, a global environmental group. The latter is currently being probed in the UK for apparently being “hijacked” by left-wing extremists.

Greta Thunberg was not the only celebrity who criticised the Indian government on Twitter over the farmer protests following the 26 January riot in New Delhi. American pop-star Rihanna and Meena Harris, the niece of US Vice President Kamala Harris, also spoke out on the matter. Their tweets got thousands of likes and shares on the social media platform.

​”It’s no coincidence that the world’s oldest democracy was attacked not even a month ago, and as we speak, the most populous democracy is under assault. This is related”, claimed Meena Harris, drawing parallels between the 6 January Capitol Hill incident and the Indian farmer protests. “We all should be outraged by India’s internet shutdowns and paramilitary violence against farmer protesters”.

In response to the “tweet storm”, India’s Ministry of External Affairs (MEA) expressed bewilderment over the interference of foreign celebrities, given their minimal expertise in Indian affairs: “The temptation of sensationalist social media hashtags and comments, especially when resorted to by celebrities and others, is neither accurate nor responsible“, the MEA statement said.

#WATCH: EAM Dr S Jaishankar speaks on ‘Toolkit’ matter, says, “It has revealed a lot. We’ve to wait & see what else comes out. There was a reason why Foreign Ministry reacted to statements which some celebrities gave out on matters on which they obviously didn’t know very much.” pic.twitter.com/wWmqWtFkL8

​The MEA pointed out that in reality, a “very small” faction of Indian farmers currently has reservations about the agri laws proposed by the Modi government. For its part, the government has lent a sympathetic ear to Indian agri workers, initiating a series of talks with their representatives. Furthermore, New Delhi has offered to keep the laws on hold to dispel the concerns. “Yet, it is unfortunate to see vested interest groups trying to enforce their agenda on these protests, and derail them. This was egregiously witnessed on January 26, India’s Republic Day”, the ministry wrote.

“The dedicated pro or anti-government campaigns are not new to India”, says Dhillon. “They are just gone digital nowadays. But the fear here is that Indian consumers ate data without any cross-checks and analysis; they are tech-savvy/friendly but not aware enough to see long-term repercussions. That’s where the role of vested interest groups starts, to derail the agenda of the ruling government, whether it is right or wrong”.

‘External Fuelling’ of Worldwide Protests on Rise Under Biden

It’s unlikely that the Indian people will buy into the Western celebrities’ media narrative, as they know where the red line between a protest and a propaganda campaign, like the toolkit, goes, says Dhillon.

“The relations are shaped by the governments and individuals, and celebrity culture just adds soft power to it”, she notes. “I do not think it will create more than breaking news and Twitter trends in India“.

Meanwhile, on 4 February, the Biden administration said it welcomes New Delhi’s steps to improve the efficiency of India’s agri markets and attract greater private sector investment to the sphere, adding that “peaceful protests are a hallmark of any thriving democracy”. However, the Indian analyst remains sceptical about Biden’s sincerity.

“The clear agenda of the Biden administration is to reverse the policies crafted by the Trump administration”, the foreign affairs analyst underscores. “The recent statement was diplomatic in nature but contradicting itself. India has an independent foreign policy and should not accept any validation by the foreign governments for its greater good. Analysts and experts do not need to rack their brains too much to understand the series of ‘external fuelling’ across the globe since the Biden administration came in”.

Common Practice? There are 1,000 More US Troops in Afghanistan Than Officially Disclosed