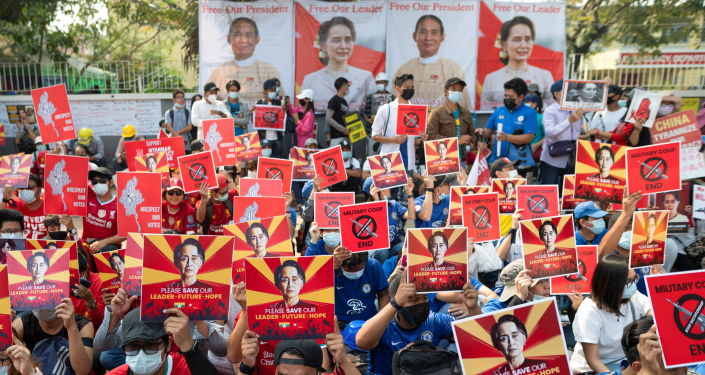 Facebook has shut down the Myanmar military’s main page over what the social network described as violations of its standards that forbid the incitement of violence.

“In line with our global policies, we’ve removed the Tatmadaw [the Myanmar military] True News Information Team Page from Facebook for repeated violations of our Community Standards prohibiting incitement of violence and coordinating harm”, the platform said in a statement.

The move came after police arrested well-known Myanmar actor Lu Min amid the ongoing mass protests against a military coup in the Asian nation.

The actor was one of six celebrities wanted for encouraging civil servants to join in the protests. If convicted, Lu Min may face a two-year prison sentence.

He was detained hours after at least two people were purportedly killed and 20 others wounded when police and soldiers fired to disperse protesters in Myanmar’s second-largest city of Mandalay on Saturday.

UN Secretary-General Antonio Guterres condemned the violence, writing on his Twitter page that “the use of lethal force, intimidation, and harassment against peaceful demonstrators is unacceptable”.

He was echoed by British Foreign Secretary Dominic Raab who tweeted that “the shooting of peaceful protesters in Myanmar is beyond the pale”. He pledged that the UK along with its international partners will “consider further actions against those crushing democracy and choking dissent”.

Two protesters were killed and dozens injured yesterday in Mandalay. Yet, hundreds of thousands of its residents comprising doctors, nurses, engineers, students & teachers gathered near Zeygyo market, one of the hallmarks of the city, on Sunday to protest against the regime. pic.twitter.com/sU1gbG0A4b

Mass anti-coup demonstrations, meanwhile, continued across Myanmar on Sunday, with Yin Nyein Hmway at the Yangon protest vowing that “the number of people will increase today and we won’t stop”. According to Yin, the protesters “will continue to [fulfill] our goal of democracy”.

Apart from Yangon and Mandalay, demonstrators took to the streets in the towns of Monywa, Bagan, Dawei, and Myeik.

On 1 February, the Myanmar military seized power hours before the new parliament was due to hold its inaugural session.

The nation’s de facto leader, Aung San Suu Kyi, was arrested alongside other senior officials after the military accused her party of rigging the November 2020 elections. The Tatmadaw declared a state of emergency and promised to hold a fair vote next year.