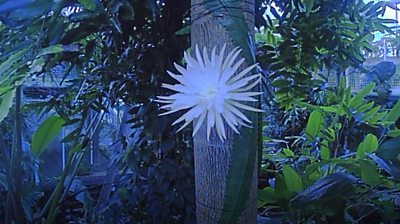 The bloom of an Amazonian moonflower, believed to be a “UK first”, has been captured in a time-lapse film.

The Selenicereus wittii, a cactus within the collection at Cambridge University Botanic Garden, has drawn attention from around the world as it only blossoms for 12 hours.

It was thought the plant would blossom at night, but a garden spokesperson said it appeared it was a “sun lover” as it revealed its flower before sunset on Saturday.

Staff at the garden hope it will bloom every year.

‘Now or never for Belgium’s golden generation’ – but at what cost has Portugal win come?

Covid: How pupils feel about their return to school

Syria to hold election in May after years of war

Why is it harder to diagnose disorders on non-white skin?