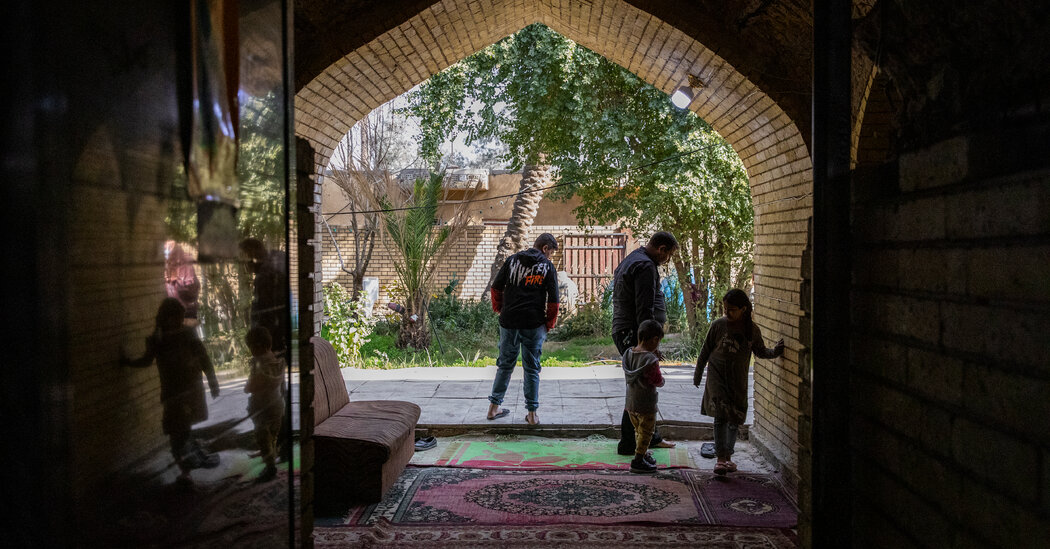 BAGHDAD — Down the road from the railway yard where plastic trash piles up against rusting freight cars, the angels arrive every evening to stand watch over the tomb of Joshua. A servant of the shrine, Um Junayd, said she sees them.

“When I open the prophet’s door at night, I find many birds on his tomb,” she said. “They stay the night with him and they leave in the morning. These birds are angels.”

She asked to be called simply Um Junayd, the mother of Junayd, her eldest son, because to have her full name appear would be immodest. The family of her late husband have been caretakers of the shrines in this neighborhood for 600 years.

In the Old Testament, Joshua was a companion of Moses, leading the tribes of Israel into battle and, as the hymn tells it, bringing the walls of Jericho tumbling down.

There is no historical evidence Joshua actually existed. If he did, his tomb is said to be in at least three other places, including present-day Israel and Turkey.

But that does not matter in the least to Um Junayd or the multitudes who have been coming to this shrine since Baghdad was founded 1,200 years ago.

“He prayed to God to come to Iraq and die in Iraq,” Um Junayd said when asked how Joshua would have made his way here from Jericho. “This is his grave.”

The assistant director of Iraq’s Sunni Muslim shrines, Sheikh Suhaib Yas al-Rawi, said he knows it is Joshua’s tomb because there was a sun engraved on the original walls, along with the name Joshua bin Nun, a reference to the prophet’s father. In the Old Testament, God stopped the sun for Joshua.

Um Junayd, 70, wears an all-enveloping black cloak over a dark green velvet robe and plastic sandals. She exudes serenity and, occasionally in describing the wonders revealed to her, a radiant joy.

She speaks of visions of a bird encircled with Quranic verses, so blindingly beautiful she cannot describe its colors, and of a visit by an angel in the form of a white bird so large its wings shook the floor.

Behind her, sparrows twitter and a bulbul, a songbird, trills from the branches of a sacred tree. With the birds completely hidden behind a profusion of glossy green leaves, it seems as if the tree itself is singing.

The tomb itself lies through a low doorway of a vaulted brick shrine, partially renovated in recent years by Iraq’s Sunni Muslim religious authority. Inside is a large rectangular coffin made of sandalwood and covered in dark blue velvet embroidered with gold and silver calligraphy. A star-shaped mosaic with missing mirrored tiles on the domed ceiling is strung with a dark green net to catch insects before they fall onto the coffin.

Like light refracted, over time the prophet in the Hebrew Bible has come to be revered by multiple faiths, including Islam. The Quran considers him the assistant of Moses.

More than 1,200 years ago during the Islamic golden age, when Baghdad was the capitol of the Abbasid caliphate, Sufi Muslim philosophers, scholars and mystics paid homage to Joshua, and some are buried near the shrine. The faithful hoping to have their prayers answered and the sick looking to be healed are drawn here.’

Joshua’s shrine is now surrounded by the tomb of St. Junayd al-Baghdadi, a Sufi master who died in 910, and the grave of Bahloul, a judge and poet who lived about 100 years earlier. There’s also a shrine dedicated to Guru Nanak, the founder of the Sikh religion, said to have visited Baghdad and to have discussed theology with the spirit of Bahloul.

Accounts from centuries ago place the shrine an hour’s walk for pilgrims from the city. On a recent day, Salih Ahmed Salih and his wife, Arwa Sameer, stepped out of a yellow taxi with their two children in what is now a crowded Baghdad neighborhood.

Mr. Salih said no doctor had been able to relieve the pain of his wife’s herniated disc. Ms. Sameer followed Um Junayd, who read Quranic verses over her in the hope of healing and prescribed a verse for her to recite 30 times a day at home. Afterward, inside Joshua’s shrine, Ms. Sameer placed her right hand on the velvet covering beneath the crumbling domed ceiling and prayed.

“This is the medicine for the world of believers,” said Um Junayd, who never learned to read but knows the Quran by heart.

Basheer Abdullah, a government employee, arrived with his daughter and two sons. “Mama is sick,” said his son, Gaith, 4, when I ask why they have come.

Mr. Abdullah’s ancestors are buried in a cemetery nearby, where graceful date palms cast shadows over centuries of tombstones.

“Our grandfathers said the Prophet Yusha is buried here,” he said, using the Arabic name for Joshua. “The prophets are known from generation to generation.”

A burly man dressed in the beige clothing of a fighter, with his knee in a plastic brace, limps into the shrine and lays his pistol on the carpeted floor as he prays. A smiling man with a white crocheted prayer cap, who is studying Sufi Islam, comes to pay his respects to the prophet.

Um Junayd speaks only to the women. She said she has no use for the outside world, where people speak of topics that don’t interest her like furniture and new cars. She feels blessed to be able to clean the street where the prophet once walked.

Her husband, Abu Junayd, died a decade ago.

“He was good-hearted, and people loved him. He had a face like the moon,” she said, using a common Arab expression of beauty. “God gave him to me as a blessing.”

I first met Abu Junayd when I visited the shrine in 2001 with my friend Nermeen al-Mufti, an Iraqi journalist who 20 years later brought me back. Twenty years ago, Abu Junayd told us about the Jewish neighbors that some in the neighborhood still remembered — descendants of Jews in exile in Babylon, and an important part of Iraqi society until most were forced to leave in the 1950s.

He told us about the snake that protects the shrine at night, appearing through a crack in the ancient wood of the prophet’s coffin.

Um Junayd said in the daytime, the snake roams around protecting the neighborhood. At night, she said, they can hear it returning. Beyond that, she cannot not tell us.

“This land is blessed and has secrets,” she said. “Some things are obvious and some things are not obvious. We cannot answer everything.”

Astronauts Launching to Space Are Vaccinated Against Covid-19