‘Stakes are high’ as QAnon conspiracy phenomenon emerges in France 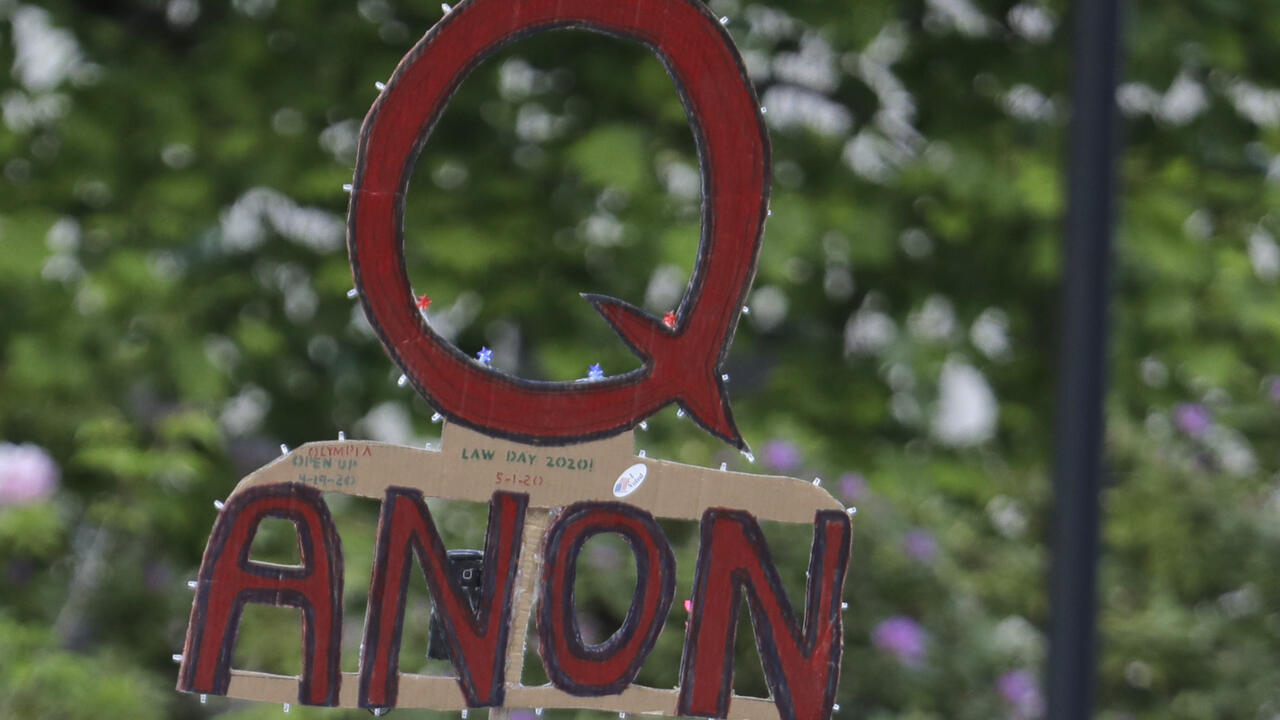 After rising to the fore in the US during the most fraught presidential campaign the country has seen for decades, the QAnon phenomenon has emerged in France – prompting President Emmanuel Macron’s government to order a multiagency inquiry on conspiracist movements scheduled to report back at the end of February.

The French state agency responsible for tackling sectarian movements, MIVILUDES, has received some 15 reports over recent weeks raising the alarm about the rise of QAnon in France, Le Figaro reported. The agency described the development of the movement as “highly concerning” in an internal communication seen by the French paper.

As she commissioned an inquiry by the police and MIVILUDES, Minister for Citizenship Marlène Schiappa expressed the same sentiments: The development of “new conspiracist groups” on French soil is “very worrying”, she told France 3 in January – underlining that the government “has its eye on” QAnon.

The website DéQodeurs is a major French gateway to its world. The site’s centrepiece is a big screen at the top of the homepage broadcasting a video titled “We are the people” – which has also garnered more than 57,000 views on YouTube since its publication on January 27, even though the site removed DéQodeurs’ dedicated channel in October.

‘Nothing on this earth can stop us’

The video opens with a martial drumbeat playing over an image of the US Capitol in black and white, with dark clouds dominating the sky. “You see, my son, I was your age; I wasn’t yet 15,” the voiceover starts. “The world was a crazy place.” An image follows of St. Peter’s Square menaced by storm clouds. “But this was only the beginning of the story,” the voice continues as the music becomes slower and gentler.

“Some people understood things since the start and they didn’t mess around,” it carries on. “And here and there you can hear them singing.” A photo shows a group of people putting their hands together. A song breaks out, with a chorus saying “we are the people, we are united, nothing on this planet can stop us”.

The DéQodeurs website offers links to “information” including articles relaying fake news based on QAnon tropes – such as the baseless claim that in 2016, Israeli Prime Minister Benjamin Netanyahu was about to release documents proving the existence of a massive paedophile ring in Washington DC. A section titled “armoury” offers videos – including a two-hour long segment stating falsehoods purporting to provide “absolute proof” that electoral fraud robbed Donald Trump of victory in November’s US presidential election, spoken using French translation clumsily superimposed over an American voice.

The idea of Trump as a hero waging a secretive war against a cabal of cannibalistic, Satan-worshipping paedophiles is the heart of QAnon’s fantasy – none of which is true.

The main figure behind DéQodeurs is Léonard Sojili, an Albanian national who first emerged on the French internet in 2011, promoting 9/11 conspiracies. Sojili also propagates QAnon theories through the YouTube channel Thinkerview. On this platform he mixes support for the conspiracy theory with interviews of prominent French figures from across the political spectrum. Thinkerview boasts some 773,000 subscribers.

A more surprising title boosting QAnon is France-Soir. This publication was one of the country’s most august broadsheets during the post-war economic and cultural flowering of France’s Trentes Glorieuses, publishing articles by the likes of Jean-Paul Sartre and novelist Joseph Kessel. The newspaper closed in 2012 after moving downmarket.

But France-Soir was relaunched four years later as a populist website sometimes trafficking in conspiracy theories, with its last remaining journalists sacked in 2019. Over the past year, the publication went from publishing coronavirus disinformation to publishing fake news to promoting QAnon theories.

Many QAnon proponents have weaved Covid-19 pseudoscience into their fantasy. France-Soir’s QAnon material “fits with” the publication’s “scepticism with government Covid policy”, said Emily St Denny, an expert on French politics at the University of Copenhagen.

“The emergence of QAnon in France is a recent development,” she noted, “having emerged largely in the second half of 2020, in parallel to the pandemic and public health restrictions put in place to curb it.”

The popularity of pseudo-documentary Hold-Up shows that Covid disinformation has a big audience in France: It got more than 2.5 million views after its release in November, with several famous faces including iconic actress Sophie Marceau sharing the video. The film propagates an array of debunked claims, including the notion that a global cabal of elites is using the pandemic to create a totalitarian New World Order – a similar trope to QAnon’s belief in a conspiracy of Satan-worshipping paedophiles.

While it tends to eschew such lurid narratives, anti-vaccine sentiment is relatively widespread in France. An Ipsos poll published in November found that 46 percent of French adults said they would refuse to receive a Covid-19 vaccine – compared to 21 percent in the UK. A 2019 Gallup poll found that one in three French people thought all vaccines are dangerous – the highest proportion of respondents to say so in 144 countries surveyed.

“We’ve had suspicions about lockdowns, curfews and medical practices activating traditional French phenomena such as anti-vax sentiment and newer ones such as the alternative health movement,” said Andrew Smith, a professor of French politics at the University of Chichester.

QAnon is dangerous in this context, he noted, because it “offers a kind of unifying voice for a number of things challenging scientific and political authority – one that says to people ‘What do you think? Has anyone asked you?’ while presenting them with a conspiracy theory through the concept of gamification, a kind of puzzle-solving that becomes intoxicating to many”.

These factors mean that QAnon’s French sympathisers are far more ideologically heterogenous than those in the US, St Denny observed: “QAnon in France is definitely not the monopoly of far-right sympathisers as it might be in the US. Its anti-government underpinnings have made the conspiracy theory attractive to a very disparate collection of groups and individuals including established conspiracy theorists, some fringes of the Yellow Vests movement, and some of the more conspiracy-oriented among the alternative health movement.”

The “stakes are high” in France considering QAnon’s “disruptive potential in terms of giving a broad coalition the ideological glue to act together in ways that may be threatening to democratic or social processes”, St Denny continued.

“What strikes me is that in the US it took three years after its creation for QAnon to make an inroad into the mainstream,” Smith said. “In France, I don’t think it’s a political danger in the immediate sense – I don’t think the chap behind the DéQodeurs website is going to run for the presidency.”

“But QAnon’s rise does represent part of an erosion of sociocultural standards, including faith in parliamentary democracy as a system of rule,” he concluded. “It is an alarming threat to the values of the French Republic, as a Counter-Enlightenment trend that denies universalism.”

In the race for chancellor, Greens’ rising star may be Merkel’s ‘natural successor’

A Painful Project for France: A Museum on the Ravages of Terrorism