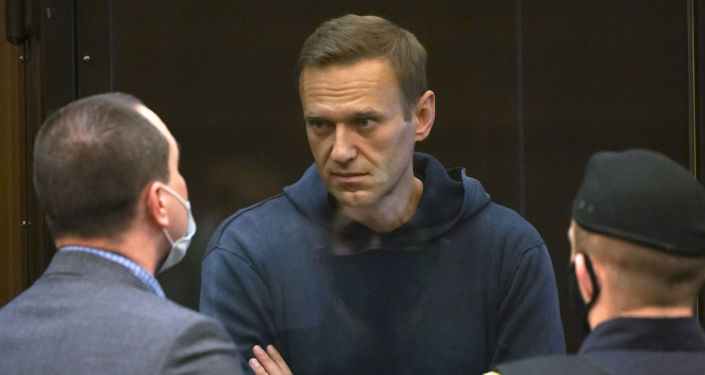 “To change the ruling of Moscow’s Simonovsky District Court: under article 72 of the Russian Criminal Code, the time Navalny spent under house arrest from 30 December 2014, to 17 February 2015, should be counted as part of the prison term, with one day under house arrest counted as one day of imprisonment. The rest of the order remains unchanged,” the court ruling read.

According to the Sputnik correspondent, this means the opposition figure will spend approximately 2.5 years behind bars, as he has missed nearly 60 check-ins with the authorities during the last three years and also received multiple minor penalties.

© REUTERS / MAXIM SHEMETOV
Russian opposition leader Alexei Navalny is seen on a screen via a video link during a court hearing to consider an appeal on his arrest, outside Moscow, Russia January 28, 2021.

In a recent slander case, Navalny is also accused of insulting a 95-year-old World War II veteran Ignat Artemenko, who spoke in support of amendments to the Russian Constitution last year.

Despite claims that Navalny is facing court due to his political activity, the European Court of Human Rights only ruled that Navalny was to be compensated for house arrest, and the Russian authorities paid the compensation.