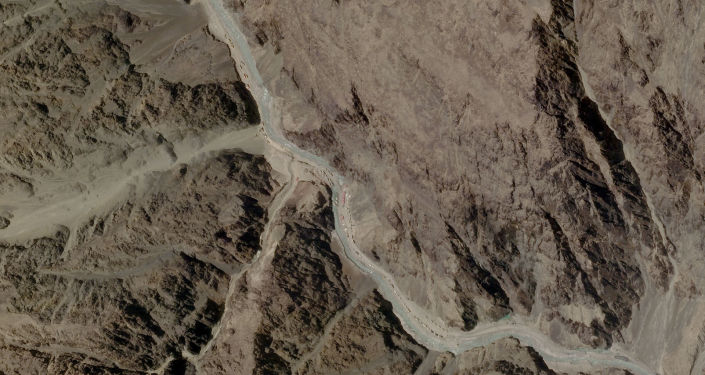 Scores of Indian social media users have raised questions over the veracity of a video shared by a Chinese state media journalist, in which a Chinese People’s Liberation Army (PLA) trooper can be seen arguing with Indian soldiers at a border location.

Sharing the video on Twitter on Friday, China Global Television Network (CGTN) producer Shen Shiwei identified the Chinese soldier in the video as PLA Xinjiang Command’s regimental commander Qi Fabao, who is one of the five troopers given a gallantry award by the Central Military Commission for fighting Indian troops during the Galwan Valley clash in June last year.

However, the claim has been disputed by Indian social media users on several counts, including the location of the said video, as well as the time when it was taken. Several social media users claim that the terrain depicted in the video is that of the Sikkim-China border and not that of Galwan Valley, which lies on the western stretch of the Sino-India boundary line.

​Several other Indian netizens also pointed out that the video had been making the rounds on YouTube months before the Galwan Valley incident took place, or even before the ongoing standoff between the two Asian militaries began in May last year.

​The video shown by the Chinese state media journalist was shared on the same day when Beijing, for the first time, admitted to suffering casualties in the Galwan Valley clash, the deadliest incident between the two countries since the 1962 border war.

Beijing has honoured four of its dead soldiers with posthumous gallantry awards sacrificing their lives in the June border flare-up. Qi Fabao, the PLA commander in the disputed video, has also been honoured for “organising” the Chinese troop contingent that clashed with the Indian Army, Global Times reported on Friday.

​“When facing more Indian soldiers appearing from nearby mountains, while reproaching the Indian military for destroying the agreement, Qi organized Chinese soldiers to move into combat formations and engage in any confrontation. The Indian military then started to attack the Chinese soldiers by using steel tubes, cudgels and throwing stones. Qi was under heavy attack and sustained a serious head injury”, said the Global Times report.

On its part, India admitted to suffering 20 casualties in the Galwan Valley incident immediately after the clashes took place last year.

The announcement by China came amid the ongoing disengagement process between the two militaries at the disputed points in eastern Ladakh. The troops from the countries have already vacated the area around the Pangong Tso Lake, as per the two governments.

On Saturday, military commanders from the two countries met at the border Moldo hut to discuss the disengagement plan at other friction points, including Gogra, Hot Springs, and Depsang Plains, all lying near the Pangong Tso Lake.