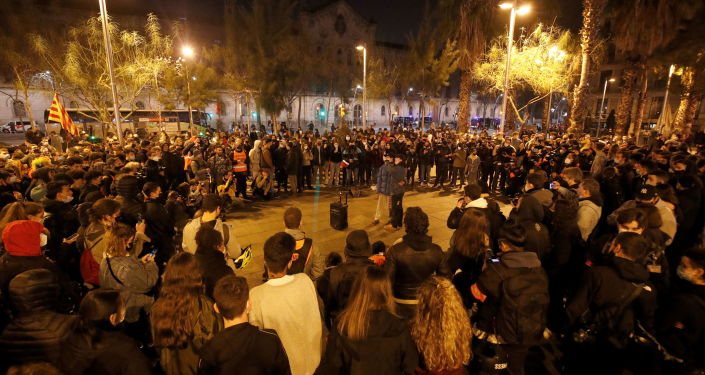 Two people were detained on late Friday in Barcelona and two more in Girona, the Mossos d’Escuadra wrote on Twitter. In these two cities, the protesters overturned trash cans, built barricades, set them on fire, broke shop windows, looted shops as well as threw various objects at law enforcement officers, while the latter resorted to the use of batons.

The unrest has also left at least six people injured, according to the Catalan emergency services.

“Defending freedom of expression in no way justifies destroying all kinds of property, scaring neighbors, harming businesses affected by the crisis or attacking the media. All support [goes] to security forces and emergency services working to prevent further harm,” Barcelona Mayor Ada Colau wrote on Twitter.

Protests were also held in other Spanish cities, including Valladolid and Valencia, but they ended peacefully, according to media reports.

New demonstrations are expected to take place during the weekend. On Saturday a rally in support of the rapper is to be held in Madrid; the previous one on Wednesday ended in riots and clashes with the police.

The Catalan rapper was sentenced in 2018 to nine months in prison for glorifying terrorism and slandering the Spanish monarchy on Twitter and through the lyrics of his songs. Hasel was supposed to voluntarily come to prison last Friday but he refused to do so. On Tuesday, the rapper was arrested.

The rapper’s jailing caused a public outcry and debates about the freedom of speech. Hundreds of artists, including Javier Bardem and Pedro Almodovar, signed a petition against the imprisonment.