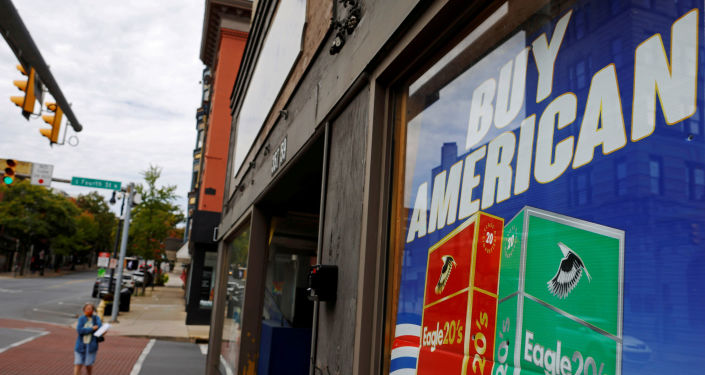 European Commissioner for Trade Valdis Dombrovskis has made it clear that the EU is concerned over the Biden administration’s drive to implement its “Buy American” plan.

In an interview with the news outlet Politico on Thursday, he pledged that the EU would keep a watchful eye on whether preferential treatment for US contractors working on public projects was in line with Washington’s international obligations.

“We will be assessing to which extent the US complies with its [World Trade Organisation (WTO)] commitments under the global procurement agreement”, Dombrovskis underscored.

At the same time, the European Commission’s trade chief kept mum on whether the Biden administration is breaking WTO rules with the “Buy American” mantra.

“As regards ‘Buy American’, this is something which will require some more in-depth assessment, what are the exact implications, what are the implications for EU companies, what does it mean for US commitments in the WTO framework”, Dombrovskis noted.

He spoke after US President Joe Biden signed an executive order on 25 January that aims to strengthen domestic manufacturing and create a spate of markets for new technologies.

He warned that the US “can’t sit on the sidelines in the race to the future” because its competitors “aren’t waiting”.

According to POTUS, “to ensure the future is made in America, we need to win not just the jobs of today, but the jobs and industries of tomorrow”.

The comments followed Biden unveiling his “Build Back Better” economic plan that stipulated a $400 billion government investment in the purchase of US goods and services, with $300 billion due to be invested in research and development, including on 5G technologies and artificial intelligence.

Some perceived the plan as a blueprint that bears some similarities to Donald Trump’s 2016 “Make America Great Again” campaign slogan and his emphasis on employment in American manufacturing.

Biden aides, however, rejected it, insisting that the Democratic candidate’s appeal is more “coherent” than Trump’s. According to the Biden campaign, President Trump had four years to implement “Buy American” policies but never succeeded in doing so.

‘I Hope Everyone Remembers!’ Trump Hints He Should Be Thanked for Vaccines Against ‘the China Virus’