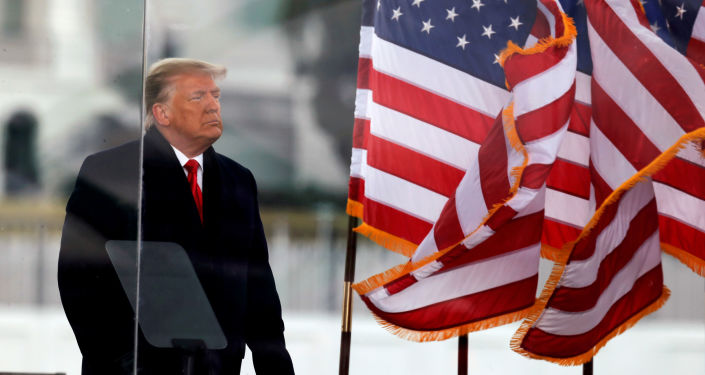 Fifty-four percent of GOP voters would support Donald Trump should he run in the 2024 presidential primary election, according to this week’s Politico-Morning Consult poll. Furthermore, the share of Republican voters who said Trump should play a “major role” in the party has increased 18 percentage points, to 59 percent compared with the survey conducted immediately after Capitol protests.

Following Trump’s acquittal in the upper chamber of the US Congress, Senate Minority Leader Mitch McConnell directly blamed the former president for the 6 January DC incident, prompting speculation that the GOP leadership is fed up with Trump.

However, senior GOP politician Lindsey Graham, told Fox News’ Hannity talk show on Tuesday that the party has no other alternative than to unite under Trump. “We don’t have a snowball’s chance in hell of taking back the majority without Donald Trump,” the senator said.

“[Trump’s] ideas have taken over the majority of the Republican Party,” says Billy Grant, a GOP political consultant. “People support his ideas and his movement. And I think if you add in other people that were sort of associated with him in his orbit, sort of the MAGA lane of the party that actually probably is closer to 70 percent. So, I think, he has a pretty commanding hold on the Republican Party and that will remain true for a while.”

It would be particularly hard for any “anti-Trump” Republican to win the 2024 primary or any Senate or congressional or gubernatorial primary. Previously, GOP lawmakers who voted to impeach ex-President Trump were hit with criticism from congressional and local Republican groups.

Speaking to Newsmax TV on Wednesday’s night, the former president stopped short of committing to the 2024 presidential run. “I won’t say yet, but we have tremendous support,” Trump said. “And I’m looking at poll numbers are through the roof.” He also remarked that he’s “the only guy who gets impeached and [his] numbers go up.” The former president also spoke to One America News and Fox News following his acquittal. He told OANN that his political movement “is very strong and it’s getting stronger.”

“Anytime someone leaves office, you always sort of see things change,” says Grant. “But the difference with President Trump is I think he’s shown he’s going to stay very engaged. So I think you’ll see why his drop-off will not drop off so much compared with others because he’s going to be more engaged than other presidents previously have.”

Meanwhile, President Joe Biden’s approval is “slightly” below the historical average of 60 percent for post-World War II presidents elected to their first term, according to Gallup. At the same time, the party gap in Biden’s ratings is among the largest Gallup has measured in any poll. While 98 percent Democrats signalled their support to the 46th president, 85 percent Republican respondents disapprove of Biden.

Rasmussen’s daily job approval ratings show a gloomier picture with Biden’s approval fluctuating between 48 percent and 53 percent in the first month of his presidency.

“I think Biden’s rating is lower because so far he hasn’t really shown that he’s committed to any specific policy agenda,” says Grant. “I think people are starting to see that he talked a lot during the campaign, made a lot of promises, and so far, he hasn’t really done anything to deliver on any of them. And people are starting to see that he’s not really effective. And that’s just going to continue.”

For example, Biden is supporting policies that are not helping with unemployment, according to the GOP political consultant. Thus, the president blocked the Keystone pipeline potentially killing thousands of jobs.

​In addition, the president ordered a moratorium on new oil and gas leases on federal land and water areas as part of his climate agenda, prompting fears that he could ban fracking altogether. Biden is seemingly not going to open up the economy despite people and businesses growing weary of the pandemic: this week he suggested that COVID restrictions and lockdowns could last another year.

Asked when things will get back to normal with Covid, President Biden says: “By next Christmas, we’ll be in a very different circumstance than we are today, God willing.” He adds: “I don’t want to over promise anything here.”

Furthermore, the Biden administration’s tough rhetoric towards American right-wingers and tacit approval of Big Media censorship of conservatives contradicts the president’s election promise to “heal” and “unify” the nation. Apparently therefore, 45 percent of Republicans blame Biden to some extent for the Capitol Hill breach, while 13 percent of all respondents believe that the 46th occupant of the White House is “very responsible” for the DC protests.

© AP Photo / Andrew Harnik
Members of the National Guard walk past the dome of the Capitol Building on Capitol Hill in Washington, Thursday, Jan. 14, 2021

Biden’s Failures Will Have Big Effect on 2022 Midterms

Biden’s policies are dividing Americans along party lines, according to the GOP consultant. He cites H.R. 1 (The For the People Act) which was re-introduced by the Dems in Congress earlier this year after being axed and denounced as a “one-party power grab” in 2019 by then Senate Majority Leader Mitch McConnell.

Today, we’re going to be discussing HR 1 (For The Swamp Act) to expose this bill for the heinous piece of legislation that it is.

Once everyone understands the facts, they will understand why this bill would completely destroy elections & campaign finance in the USA. Stay tuned!

​Even before the pandemic H.R. 1 “actually had a lot of the things in it that they changed in the last election with mail-in voting, extended absentee periods, and all that stuff,” says Grant. After the bill was killed, Democrats proceeded with last-minute election rule changes in a number of states, prompting suspicion among American conservatives that the Dems deliberately opened doors to potential fraud in 2020.

“We don’t need to have these rules forever,” argues Grant. “The Democrats sort of just used that opportunity to pass the rule changes when in reality people would not have supported it if there wasn’t a pandemic. So that doesn’t need to be the new normal.”

Regardless of the Dems’ attempt to make COVID-time election rules a federal law via H.R. 1 2021, the outcome of the 2022 midterm elections will be largely determined by the American economy performance, according to the political consultant.

“I honestly believe if there was no pandemic, Trump would have been reelected,” he says. “Joe Biden sort of benefited from that, just as Barack Obama benefited from the economic collapse in 2008. Without things working in his favour, I think Biden’s going to have a hard time delivering on the promises he made.”

Russia’s Ruling Party Ahead in Parliamentary Vote With Over 48%, Election Commission Says