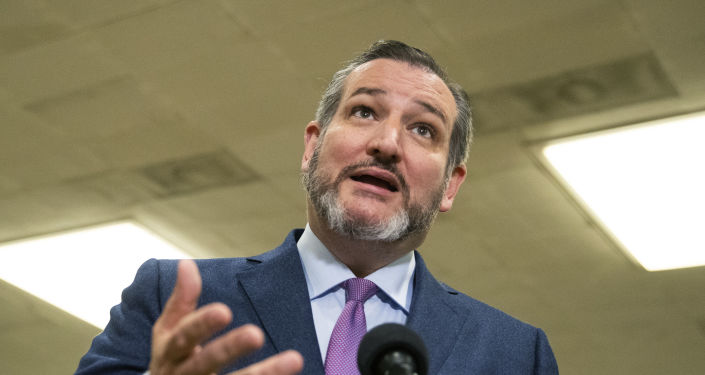 Photos spread across social media on Thursday of Cruz, a Republican who represents the state of Texas, on a plane to a Mexican resort, as millions of his constituents are struggling to stay warm amid a days-long power outages.

Americans were already enraged enough that Congress went into recess earlier this week without passing the long-debated COVID-19 relief bill, but their fury reached new heights when a pair of photos emerged late on Wednesday of the Texas senator in an airport terminal and on a plane to sunny Cancun, in Mexico’s Yucatan Peninsula.

Just confirmed @SenTedCruz and his family flew to Cancun tonight for a few days at a resort they’ve visited before. Cruz seems to believe there isn’t much for him to do in Texas for the millions of fellow Texans who remain without electricity/water and are literally freezing. pic.twitter.com/6nPiVWtdxe

​Cruz’s whereabouts were confirmed by several sources, including a tip to the Associated Press. Cruz issued a statement Thursday afternoon in which he confirmed the reports, saying he made the flight “to be a good day” to his daughters, who went on travel due to schools being closed.

​Cruz was confirmed earlier on Thursday to have bought a business-class ticket back to Texas, having originally been scheduled to return on Saturday, contrary to the lawmaker’s later claims.

Spoke to a source at United Airlines, Senator Ted Cruz rebooked his flight back to Houston from Cancun for this afternoon at around 6 a.m. today (Thursday). He was originally scheduled to return on Saturday.https://t.co/QV9xgibIQ9

​Back home in Texas, as many as 150,000 people were without power on Thursday morning, down from some 4.4 million who lost electricity as a powerful snowstorm and cold snap rolled in from the north. In addition, some 7 million people remain under “boil water” advisories thanks to ruptured water lines and downed power lines. Texas authorities had promised short-term “rolling” blackouts to conserve power, since the state’s electrical grid isn’t connected to the rest of the US, but those became days’ long outages as downtown areas remained well-lit.

In poorly insulated homes and deprived of power for days, millions now face hypothermia and other dangers as temperatures plunge below zero degrees Fahrenheit (negative 17.7 Celsius). At least 37 people have died so far from the storm, the majority of them in Texas.

Cruz is by no means the only unhelpful Texan lawmaker: Governor Greg Abbot has attempted to blame the power outages on the supposed vulnerabilities of wind turbines to cold, and Colorado City Mayor Tim Boyd resigned after telling his constituents that “Only the strong will survive and the weak will parish [sic].”

On Twitter, the hashtag #TedFled began trending, as constituents expressed their outrage that the lawmaker would abandon his people in a time of crisis.

#TedFled while his constituents are melting snow to use as drinking water.

As Texans die from exposure, Ted Cruz is LIVING IT UP in Cancun.#TedFled because Ted Cruz doesn’t care.

​One person noted that Beto O’Rourke, a former federal lawmaker from El Paso who launched a failed bid to win the 2020 Democratic Presidential Primary race, was doing more to directly help Texans in the crisis than Cruz, who is still in office. In a Thursday post, O’Rourke described some of the community aid he had helped coordinate, including transporting elderly people to warming centers.

Beto ORourke who holds no office is organizing phone calls to help Texans. Governor Abbott is whining on tv blaming wind turbines (10% of the problem and could be winterized.) But Senator Ted Cruz takes the cake- Ted flew to a resort. #cancuncruz #TedFled #TedCruzRESIGN https://t.co/eTx9ZONNUL

​Others poked fun at the situation, including noting how the writers of the animated sitcom “The Simpsons” had managed to predict yet another situation years before it came about.

​Texas Democrats have now raised calls for the leading Republican senator to resign. Texas Democratic Party chairman Gilberto Hinojosa called Cruz’s trip “disturbing and disappointing,” saying that he was “jetting off to Mexico while Texans remain dying in the cold.”

“The Texas Democratic Party calls on Ted Cruz to resign or be expelled from office,” Hinojosa said in a Thursday statement. “Barring that, we will put all of the resources we have into defeating him and every Texas Republican who abandoned us in this disaster, including Governor Abbott and Lieutenant Governor Patrick, in 2022 and 2024. We are in a battle for the soul of our state. We must restore ethics, competence, and a government that works for the people.”

Taliban Blasts US Airstrikes in Kabul: ‘Arbitrary Attacks Are Illegal’

Turkey Boosts Security on Iranian Border Over Situation in Afghanistan