Ring’s video doorbell lineup has always had a few things in common. They all stream and record video of whoever’s at your door and can be installed easily. And while the base model’s $99 price tag is attractive, it’s a lot to spend on something replacing your inexpensive standard doorbell.

Enter the Video Doorbell Wired with a price tag of $59.99. Yes, that’s right, you can get a Ring video doorbell for under $60 now and it’s pretty featured filled. As its name implies, you’ll need to have a wired doorbell with a power supply already installed in your home in order for it to work in your home.

The who, what and how

Who these are for: The Ring Video Doorbell Wired is a smart home security device that lets you see and talk with whoever is at your door, whether you’re inside your home or thousands of miles away. At $59.99, it’s the cheapest video doorbell in Ring’s lineup, but it doesn’t skip out on too many features. If you’re looking for a way to boost your home’s security without spending a fortune, this is a good place to start.

What you need to know: Ring offers several different video doorbell models that range in price from $99 up to $349, each with their own features and capabilities. The Video Doorbell Wired matches some of the higher end features, like 1080p HD video feeds, two-way talk, and customizable motion alerts. You’ll miss out on advanced features like having Alexa take a message for you when you’re not home though.

How they compare: The Video Doorbell Wired is the smallest video doorbell Ring sells, making it a quick and painless install. You’re going to get a great picture with clear audio, but you’ll miss out on the better-looking night vision feeds we’ve seen on other Ring products, and some software features aren’t compatible with the low cost alternative.

Shrinking the doorbell and install time 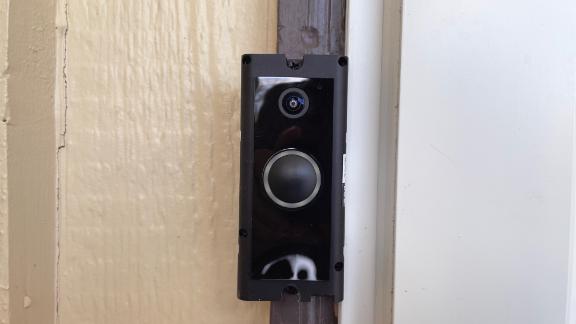 In fact, it’s the smallest video doorbell we’ve tested, beating other Ring products, Nest Hello and the more recent Logitech Circle Video Doorbell. If you’re low on space to put your doorbell, odds are you can still make this work.

And Ring isn’t reinventing the wheel with design —- it follows the format set by other Ring doorbells. There’s a single button on the front with an LED light ring going around it. Just above the button is the camera that’s capable of capturing 1080p HD video.

Included in the box is the Video Doorbell Wired, a black faceplate (you can buy different colors for $15, but the main housing only comes in black), a screwdriver for the security security screw that holds the faceplate in place, a couple of screws for mounting and a wire jumper for you existing hardware chime (should you have one).

You’ll need to supply a phillips screw, or our preference, a wireless drill with a phillips head adapter. It’s not a bad idea to have some wire strippers on hand just in case.

Here’s the good news: Installing a video doorbell is a rather simple affair as long as you’re comfortable with a screwdriver or drill, and working with a couple of wires.

The Ring app (for Android and iOS) walks you through the process, step by step, and helps you determine the best install process. For example, it starts with a valuable reminder that you’ll need to turn off the power to your doorbell. You don’t want to work with live wires, even if it’s “just for a doorbell.” It’s an important step you don’t want to skip.

Even though the app walks you through the install, we’ll try to summarize our experience based on the steps we took.

Once that’s done, you remove your old doorbell which should be held in place by a couple of small screws. With that out of the way, you connect the Video Doorbell Wired to the two doorbell wires — it doesn’t matter which one goes where — screw the doorbell in place with the included screws.

One thing we missed during the installation that previous Ring doorbells have included as well as those from competitors is the lack of a small level built into the housing. That small level helps ensure the doorbell is straight without the need to go dig out our small level or take our chances with our eyesight.

With the doorbell mounted to the wall or doorframe, you can either put the faceplate on now, or power up the doorbell to ensure everything is working before putting the plate on. We did the latter, just to be sure.

Now that the doorbell is installed, it will begin talking to you, letting you know it’s ready for setup. You’ll scan a barcode using the Ring app on your phone, enter some information, connect it to your Wi-Fi network and then the app will walk you through various settings. Those include customizing motion zones that the doorbell will monitor and ask if you want to share the doorbell with anyone else.

In total, it took us under 10 minutes to install the Video Doorbell Wired. Granted, we’ve installed many video doorbells, but this was one of the most straightforward installs we’ve done to date. Oftentimes having to deal with rewiring the chime inside your home is a headache that’s not worth dealing with. 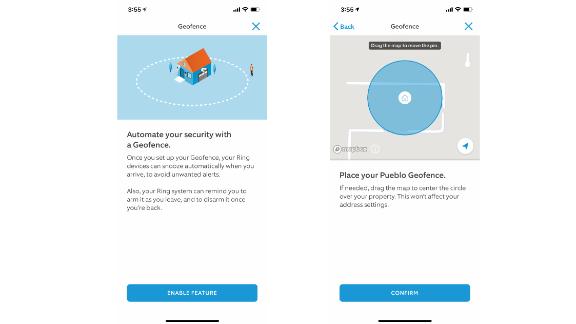 In order to hit the $60 price, Ring had to understandably remove some features that its more expensive offerings include. The short list of features you won’t find in the Video Doorbell Wired include working with your existing chime, dual-band Wi-Fi (you’ll need a 2.4GHz network) and interchangeable faceplates.

There are some software features you won’t get, as well, like the just announced quick replies where you use shortcuts in the app to tell the person at your door you’ll be there soon, to just leave the package or to take a message. You also won’t get Alexa Greetings or Motion Warnings, both of which were also recently announced.

That said, the Video Doorbell Wired does work with Ring’s new geofence feature (something we’ve been waiting for the company to release for a very long time). When enabled, you can mute motion alerts when you arrive back home so your phone isn’t letting you know there’s motion at your door, when you’re the person causing the motion. The new geofence feature will also remind you to arm or disarm your alarm system, if you want it to. It’s pretty handy.

We didn’t have too many visitors after installing the Video Doorbell Wired — probably because of the very cold temperatures — so we had to do most of our testing with family members in the home.

We opted to turn on motion alerts for only when people are detected which should eliminate any extra motion alerts for random events like a dog running through your yard or a car driving in front of your house. Not once did we receive a notification on our phone that didn’t have a person trigger it; a true blessing for those of us who live with a busy street within view of video doorbells. 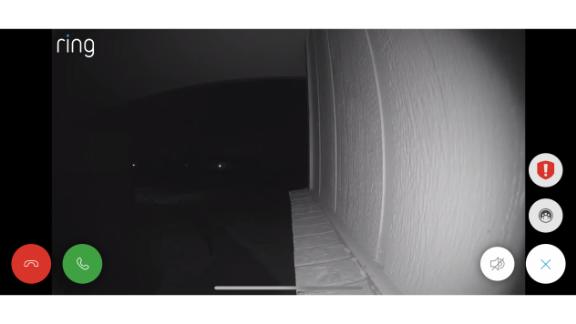 The doorbell’s video capabilities include a 1080p HD live video stream and recording with night vision. There’s a 155-degree horizontal field of view and a 90-degree vertical field of view that was more than enough to get the majority of our front porch in the frame.

Of course, the biggest feature of the doorbell is that it functions like, well, a doorbell. When someone presses the button, an alert will be sent to your phone letting you know someone is at the door. If you want some sort of centralized chime in your home, and due to the Video Doorbell Wired not working with existing chimes, Ring is selling the doorbell bundled with one of its wireless Chimes for $79.99. That’s roughly a $9 discount from buying both devices on their own.

Additionally if you have Amazon Echo devices, you can also receive alerts on your smart speakers and displays.

We did miss having our mechanical chime go off each time the doorbell was used, but found the alerts on our phones to be more than enough to keep us aware of what was happening on our doorsteps.

With two-way audio, you can answer the doorbell and have a conversation with whoever’s at the door while looking at them. Audio and video in our testing was clear and crisp, free of any lag or delay in connecting when we first opened the alert.

One area we wanted more from is using the doorbell at night. The night vision feature lit up a portion of our door, but didn’t let us see beyond a couple of feet in front of the camera. Previous models and some from competitors have much better night vision. That said, it’s good enough to highlight someone standing at your door —- but not much in terms of going the distance.

The Ring Video Doorbell Wired worked as well as other Ring video doorbells with few exceptions. And at the $59.99 price, it’s hard to find fault with the areas where it was lacking. We recommend getting the bundle deal with a Chime to ensure everyone in your home is aware when someone is at the door.

Gap’s first piece of Yeezy clothing is a $200 jacket

The week in 33 photos