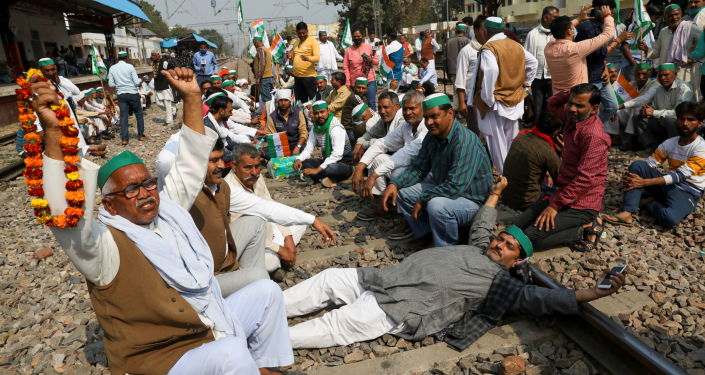 Indian farmers have begun a four-hour nationwide “rail roko” protest on Thursday, as part of which they will sit on tracks blocking routes. Amid heavy security deployment, the farmers aim to engage with passengers on halted trains to spread public awareness by telling their side of the story.

The sit-in initiative has been organised by Samyukt Kisan Morcha (SKM), the umbrella body of 40 farm unions.

According to farming leader Rakesh Tikait, the farmers will provide refreshments such as water, milk and fruit to passengers stranded on trains that will be affected by this “peaceful protest”.

Photos and videos of farmers sitting on the rail tracks in different cities such as Sonipat, Jind, Bengaluru, Hoshiarpur and Ghaziabad have already started to appear online. The protesters can be heard chanting slogans asking the government to revoke these “dark laws”.

​Footage of some farmers being detained by police officials at Jharkhand state’s Namkom railway station have also appeared on Twitter.

“We appeal to everyone to maintain peace during the protests so as not to inconvenience passengers,” a railway ministry spokesman said.

Thousands of farmers have been protesting around Delhi against three new farm laws that were passed in September 2020 during the monsoon session of the Parliament. Farmers have expressed their anger, fearing that these laws will dilute the minimum support price (MSP) system, as the new laws now require farmers to enter into supply contracts with any procurer across the country.

The government, however, defends the laws calling them “progressive”.

Bullying Politics and a Moment of Silence

Zarif Thanks Lavrov for Moscow’s Condemnation of Natanz Incident