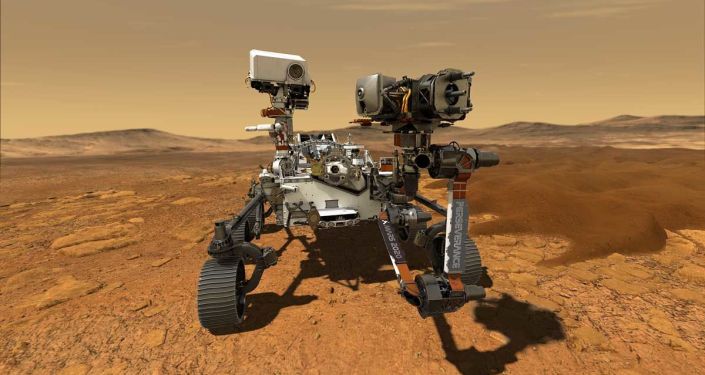 Andrew Coates, a Professor of Physics and the Deputy Director of UCL’s Mullard Space Science Laboratory, explains what makes this Mars mission exceptionally difficult and how it will contribute to space exploration.

Sputnik: Why is this Mars rover landing such an important scientific event, what do experts hope to achieve from it?

Andrew Coates: What people hope to achieve is getting more evidence or possible evidence for life on Mars, and so there’s a couple of ways this mission is going to do that. I mean, after it’s amazing landings sequence, it will actually be able to analyse samples, which it drills using a six-centimetre drill, analyse those on the surface and send the results back to Earth. It will also collect samples on the surface, which will be ready for picking up by a new mission going off in the late 2020s, and so that will be a NASA and European Space Agency mission to actually bring the first samples of Mars back to Earth. There’s an added bonus with this mission, it has a helicopter called Ingenuity, and this is the first time that an independently flying thing will have been tried on another planet. So that’s a technology demonstration but nevertheless interesting, but scientifically of course, the most interesting bits are a potential discovery of Life on Mars. We don’t know of life anywhere else in the universe apart from Earth at the moment, so there’s a number of missions looking for this, so Perseverance is one of them, and then bring samples back to Earth for the first time as well. That’s also something which is definitely in the priority for space agencies actually doing this in the future. So, it’s an amazing mission and it also paves the way for a rover mission, which we are sending in two years’ time, the ExoMars Rosalind Franklin rover, so that is a collaboration between the European Space Agency and Roscosmos (the Russian Space Agency) so that combination is a very powerful one. With that we will have a rover which can drill up to two metres underneath the surface, so we can get below the really harsh surface of Mars. So, this combination of missions, with Perseverance landing this year doing its analysis, this is an amazing combination of instruments and a great time to be working on Mars exploration.

Andrew Coates: Mars is very difficult to land on because it’s got a thin atmosphere. Basically, about 3.8 billion years ago, Mars lost the magnetic field which it used to have, so we have on Earth a protective magnetic field which stops our atmosphere disappearing, Mars now doesn’t have that luxury. So, that stops 3.8 billion years ago, bear in mind the solar system was formed about 4.6 billion years ago, so it’s a long time ago in Mars’ history. So since then, the atmosphere of Mars has been leaking out into space being lost forever to the planets and so it’s got a very thin atmospheric density now, so that actually makes it really hard to land. So it’s less than 1% of the Earth’s atmospheric pressure, it means that parachutes don’t work as well as they do in the Earth’s much thicker atmosphere for example, and so you have to have for the landing a combination of an aeroshell, which stops the thing burning up in the first place as it hits the top of that atmosphere, then a parachute to come out, that’s got to come out at the right time, and then retro rockets to slow the thing down so that it lands on the surface. So, you’ve got to have a combination like that. The places it’s landing, is a place called Jezero crater, which there’s lots of water on Mars at that time and in this area in particular, that’s left some really difficult terrain to land on. So, that’s why they need this precision landing system to actually land this with confidence. Basically, the difficulty in landing on Mars and the reason why so many missions have had difficulty, including when we had difficulty with Beagle 2 but that did land successfully on the surface as we found out maybe a decade later, it’s very difficult to land on Mars because of that very thin atmosphere. So, you can land of course on Earth with a thick atmosphere reasonably easily with parachutes; you can land on an airless body like the moon reasonably easy with just retro-rockets; but with a thin atmosphere, that’s a really difficult prospect for actually landing, and so that’s why this combination of systems has to work. There are lots of things which have to work all very well to execute this landing successfully.

Sputnik: If the perseverance rover lands successfully, what are the next steps for the rover once it lands on the Mars surface?

Andrew Coates: After landing, what it’s going to do is spend 30 days checking out the instruments and making sure all the instruments work, and then spends another 30 days or so doing a test flight of the helicopter, and so this is the Ingenuity helicopter, the first time that will have been done on Mars. It’s effectively a drone, which will go around being able to image that from the rover, and so that will be an exciting prospect. And then after that, it will go into its main mission of looking for life on Mars. So it’ll use a combination of five major instruments on board, including cameras and spectrometers, it will have this drill which allows you to drill 6 centimetres underneath the surface to get the sample, which can then be analysed on board, and then it can collect up to 38 sample for later return to Earth, and so that’s the amazing mission which it’s going to be able to do. So it’s this combination of looking for life on Mars, in situ looking for signs of biomarkers, signs of past life on Mars, because we think Mars 3.8 to 4 billion years ago, which is about the age of this crater is the time when life could have developed on Mars – that’s about the same time that [life] was developing on Earth. So, it’s a very exciting project to be helping to work on, and then it also paves the way for future exploration as I say with our ExoMars rover, joint between the European Space Agency and Russia, that one launching in two years’ time, and that can drill even further underneath the surface. So, I think this combination of missions in the next few years might lead us to be able to answer the question, is there or was there ever life anywhere else in the universe.

Day 6 of Barcelona Protests Over Arrest of Rapper Hasel