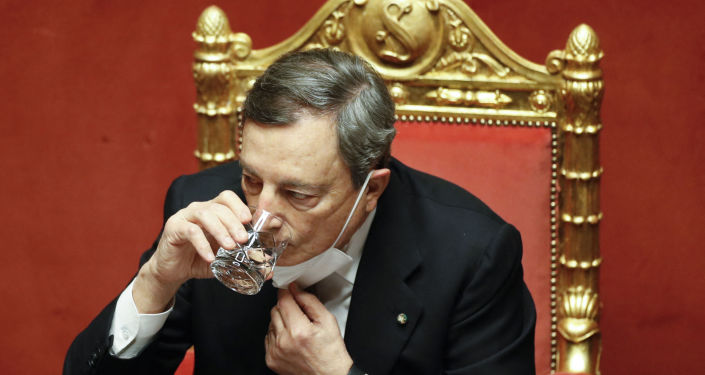 On Saturday, the new Italian government with Draghi at its head was sworn in. The new cabinet was formed after weeks of political crisis prompted by differences among the previous coalition forces about their approaches to economic recovery and resulted in the resignation of former Italian Prime Minister Giuseppe Conte.

The new government was supported by 262 members of the upper chamber of the Italian parliament, while 40 lawmakers opposed the Draghi-led cabinet. To get the vote of confidence, the government needed 161 votes.

On Thursday, a similar vote will take place in the Chamber of Deputies.

The new cabinet of ministers includes representatives of the right-wing Lega and Forza Italia parties, centrist and left-wing Democratic Party, populist Five Star Movement (M5S), centrist Italia Viva party and the leftist Article One. Several lawmakers from M5S refused to support the new government as a result of internal differences over the formation of the new cabinet.