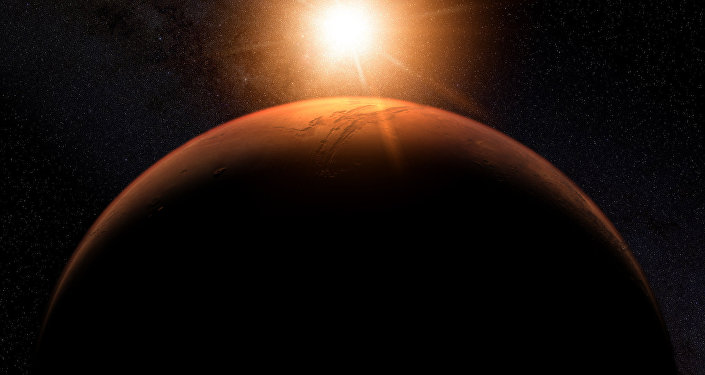 Fridays for Future, a campaign founded by Swedish activist Greta Thunberg, has published an ironic “propaganda” clip advertising Mars as a great place for humans to start over – albeit aimed at only the “ultra-wealthy” top 1% of them.

The “satirical” video, titled “1%”, features some futuristic landscapes of the red planet already equipped with shinny colony bases, as space-suited explorers look across the dunes where “no war, no criminality, no pandemics, no pollution” can be found, as the narrator goes:

“Mars, an untainted planet, a new world. We can begin again. Mars offers the ultimate freedom. Freedom to pave the new path for humans. Freedom to create a new way of life. Freedom to forever change the course of humanity. Will you spend the rest of your years on Earth, or will you be a pioneer?”

However, the campaign notes that this dreamy reality is attainable only for those who have the funds – 99% of the world’s population will never get a chance to fly to the space. They have no choice then but to work hard to solve the Earth’s environmental problems.

The video ends with a phrase: “And for the 99% who will stay on Earth we’d better fix climate change”.

Some social media users argued that film was a “wake-up call” that should be watched by “everyone” – others were not so sure:

Where exactly does she think climate science data and theories originate from?

Bad take, there are a million other wasteful endeavours worth criticising

Space exploration is not one of them

76 million even. She’s a massive proponent of human space settlement!

“On Mars, there’s no Greta. And never will be, because she’s an anti-space, anti-human luddite. Freedom from Greta. Move to Mars today!” one YouTuber joked.

What if … Archaeologists discover humans once lived on Mars but destroyed the environment so badly that they abandoned it for Earth?

Thunberg’s campaign published the clip just a day prior to an iconic landing of NASA’ Perseverance rover, which is expected to land on Mars on Thursday evening.

If the mission is successful, the sophisticated and highly expensive robot will join China’s Tianwen-1 and UAE’s Amal (Hope) crafts currently orbiting the red planet and looking for signs of ancient life. The Chinese craft, which consists of a rover and orbiter, is also expected to touch the planet’s surface later in the year.

According to the FFP, they were eager to point out the irony behind these efforts, worth billions and calls from Mars enthusiasts like Elon Musk to colonise the solar system.

“We wanted to highlight pure nonsense. Government-funded space programmes and the world’s ultra-wealthy 1% are laser focused on Mars (NASA’s Perseverance Rover alone cost $2.7 billion for development, launch, operations and analysis) – and yet, most humans will never get a chance to visit or live on Mars,” FFP said in a statement.

“This is not due to a lack of resources, but the fact that our global systems don’t care about us, and refuse to take equitable action. With 99% of the world’s population remaining on Earth, it’s imperative that we fix the climate change that’s destroying our home planet.”

LA-based FRED & FARID company, which created the “retro-futuristic and propaganda genre” film, said that it would be “both provocative and impactful to highlight shocking data”.

The 18-year-old climate enthusiast did not herself comment on the video or share it with her millions of followers, but she was the one to tell United Nations Climate Change conference two years ago that “our civilisation is being sacrificed for the opportunity of a very small number of people to continue to make enormous amounts of money”.

Elon Musk is not the only billionaire who spoke about his ambitious plans to bring one million humans to Mars on his SpaceX rockets by 2026.

Blue Origin, the aerospace company of Amazon’s CEO Jeff Bezos, is also working hard to make commercial trips to space available with its New Shepard ship as soon as possible. A voyage like that would cost a person staggering $200,000 or $300,000 per ticket, the company’s employees earlier admitted.

Bill Gates, who follows Musk and Bezos as the world’s third richest person, however admitted this week that he was really “not a Mars person” and would rather spend his money on vaccines.