CNN Underscored reviews financial products such as credit cards and bank accounts based on their overall value, but does not review all financial companies or all available financial offers. We may receive compensation for sending traffic to partner sites, such as CreditCards.com, and this compensation may impact how and where links appear on this site.

A new American Express Centurion Lounge is coming to the nation’s capital.

On Wednesday, the issuer announced it will add a 16th location to its popular airport lounge network, with a new Centurion Lounge at Washington, DC’s, Reagan National Airport. The new lounge is scheduled to open to the public in late 2022.

This latest Centurion Lounge will be built from the ground up, with its entrance in the airport’s main National Hall, near Terminal B after the security checkpoints, and will be over 11,500 square feet in size.

According to the issuer, the new lounge will have floor to ceiling windows, airfield views and one-of-a-kind design elements inspired by the city’s history. It will feature the usual signature Centurion Lounge amenities, including a complimentary custom bar and food menu, workspaces for business travelers, access to high-speed Wi-Fi, shower suites and more.

When Reagan National Airport’s ongoing Project Journey construction expansion is complete, all three existing concourses — plus a new fourth one — will be united within DCA’s secure zone, along with the airport’s dining and retail establishments in National Hall. These new security checkpoints are currently scheduled to open in the second half of 2021.

This means when the new DCA Centurion Lounge opens in 2022, it will be accessible to all flyers, regardless of which concourse your plane is departing from — though you’ll want to leave enough time to get to your flight if you’re scheduled to depart from one of the more distant gates.

American Express also announced further details about its expansion plans for existing Centurion Lounges in Seattle and San Francisco, some of which have been previously revealed during public meetings of the airport authorities in each city.

Currently the smallest Centurion Lounge in the network, the Seattle location will move entirely from its existing spot in Concourse B to a new space on the mezzanine level of the Central Terminal, and will triple in size to over 13,800 square feet. According to the issuer, the relocated lounge will feature views of the airfield and Olympic Mountains, along with new seating areas that capitalize on its open-air atrium location. 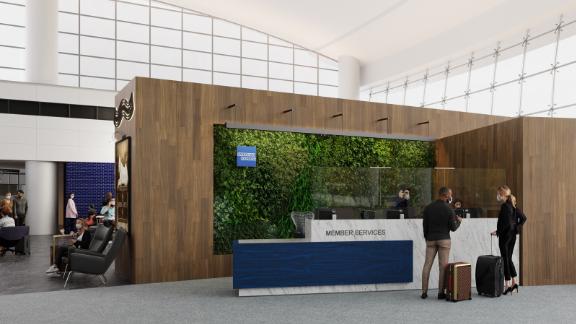 PHOTO: American Express
A rendering of the entrance to the new Seattle Centurion Lounge in the airport’s Central Terminal

Meanwhile, the Centurion Lounge in San Francisco is staying put in Terminal 3, but it will nearly double in size, increasing its footprint to almost 16,000 square feet. American Express says that the expansion will include new amenities such as a second bar and café area, additional restrooms, private phone rooms and more private workspaces.

Two other Centurion Lounges are also currently undergoing renovations, with the Las Vegas location growing from its current nearly 9,000 square-foot size to over 13,400 square feet, and New York’s LaGuardia lounge moving entirely into the airport’s newly-built Terminal B and doubling in size. The work on the Las Vegas and New York lounges is scheduled to be completed in 2021, while the Seattle and San Francisco expansions will extend into 2022.

The Centurion Lounges were closed at the start of the pandemic in March 2020, but all of them have now reopened with the exception of the LaGuardia lounge, which will remain closed until the new lounge is complete, and the Hong Kong location. The Seattle, San Francisco and Las Vegas lounges will remain primarily open during the expansion work, though there may be brief closure periods.

While the lounges are operating at reduced capacity with social distancing requirements in place due to the pandemic, you can still visit a lounge if you find yourself traveling now or in the near future. Entry is complimentary to all card members with The Platinum Card® from American Express or The Business Platinum Card® from American Express on the day of their flight.

For the most up-to-date details on all 14 existing Centurion Lounge locations, including each lounge’s current opening status, where to find them and our reviews of each space, make sure to check out our complete guide to the Amex Centurion Lounges.

Want to earn credit card rewards that you can redeem for free flights when travel resumes? Read CNN Underscored’s list of the best travel credit cards of 2021.

Get all the latest personal finance deals, news and advice at CNN Underscored Money.

New cell phone video captured by a witness shows two officers standing above Floyd who is handcuffed, sitting on the ground