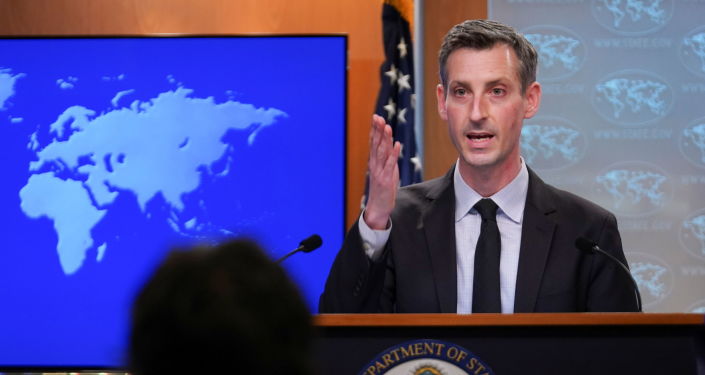 “Iran should reverse these steps and refrain from taking others that would impact the IAEA assurances, on which… the entire world relies,” Price said.

On Monday, the Iranian Foreign Ministry reaffirmed Iran’s intentions to limit the implementation of the Additional Protocol on inspections of its nuclear sites starting February 21. The ministry stressed that this would concern only additional inspections.

According to Mojtaba Zonnour, the head of the National Security and Foreign Policy Committee at the Iranian parliament, Tehran would limit its cooperation with the IAEA if the European countries do not resolve the issue of US sanctions against Iran’s banking and finance industry and did not facilitate the normalization of Iranian oil exports by the aforementioned date.

Act of Parliament will be executed on time (23 Feb) and the IAEA has been informed today to ensure the smooth transition to a new course in due time. After all, goodwill brings about goodwill!

Earlier this month, Iran’s Foreign Minister Mohammad Javad Zarif told CNN’s Fareed Zakaria that the United States must remove sanctions imposed on Iran and return to the nuclear deal if it really wants to discontinue with the policies of former US President Donald Trump. Zarif emphasized that at the end of February, Tehran was going to reduce the presence of UN inspectors in the country, but “that doesn’t mean that the window is fully shut.”

Have our E3 partners ever read para 36 of JCPOA & Iran’s many letters on that basis?

By what logic is the onus on IRAN to stop its remedial measures undertaken a full year after the US withdrew from—and continues to violate—the JCPOA?

What have E3 done to fulfill their duties?

In December, members of the Joint Comprehensive Plan of Action (JCPOA, or the Iran nuclear deal) expressed their readiness to support the potential return of the US to the agreement, something that was considered highly likely after the inauguration of Joe Biden, who was US vice president at the time the nuclear deal was negotiated.

Former US President Donald Trump unilaterally withdraw from the JCPOA in 2018 and introduced hard-line policies against Tehran, prompting it to largely abandon its obligations under the accord. In December, Iran passed a law to increase its uranium enrichment and stop UN inspections of its nuclear sites in response to the killing of nuclear physicist Mohsen Fakhrizadeh. At the start of January, Iran’s atomic energy organization announced that the country had succeeded in enriching uranium at 20 percent at the Fordow Fuel Enrichment Plant.

For the Good of the State? Almost 50 NY Lawmakers Reportedly Want Cuomo’s Resignation or Impeachment

What Goes Around, Comes Around: Dems, Biden on the Defensive Amid Lawsuits Over Immigration Policies