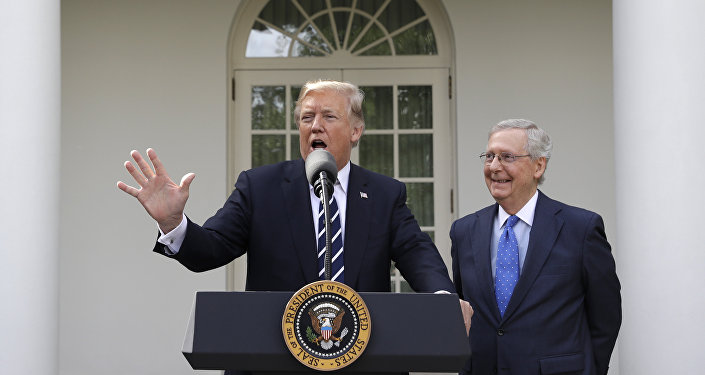 Trump released a scathing personal attack against McConnell on Tuesday that blasted the Kentucky lawmaker as a “dour, sullen, and unsmiling political hack” who is unfit to lead the Republican Party.

In the statement, which was released through the Save America political action committee, Trump largely blamed McConnell for the party’s 2020 losses in the Senate, claiming the Senate official “did nothing” as Democrats gained control of the congressional chamber.

“The Republican Party can never again be respected or strong with political ‘leaders’ like Sen. Mitch McConnell at its helm,” reads the lengthy statement. “McConnell’s dedication to business as usual, status quo policies, together with his lack of political insight, wisdom, skill, and personality, has rapidly driven him from Majority Leader to Minority Leader, and it will only get worse.”

“The Democrats and [Senate Majority Leader] Chuck Schumer play McConnell like a fiddle – they’ve never had it so good – and they want to keep it that way! We know our America First agenda is a winner, not McConnell’s Beltway First agenda or [US President Joe] Biden’s America Last,” the release continued.

“Mitch is a dour, sullen, and unsmiling political hack, and if Republican senators are going to stay with him, they will not win again. He will never do what needs to be done, or what is right for our country.”

Both Trump and McConnell initially found themselves at odds after the Kentucky official called on his colleagues to vote to certify the 2020 election results while the former president continued to voice voter fraud claims. Trump noted in his statement that he would back primary rivals against McConnell “where necessary and appropriate.”

The statement has largely highlighted the growing rift within the Republican Party over Trump after 10 Republicans in the House of Representatives voted in favor of impeaching the former president, as another seven lawmakers in the Senate voted to convict. Speculation has remained high that Trump’s since-diminished alliance with McConnell may prompt the party to splinter.

Trump’s statement came as McConnell wrote an opinion piece for the Wall Street Journal on Monday in which he defended his acquittal decision while also blasting Trump for “unhinged falsehoods he shouted into the world’s largest megaphone.”

Iran Not Willing to Give Concessions Beyond Nuclear Deal