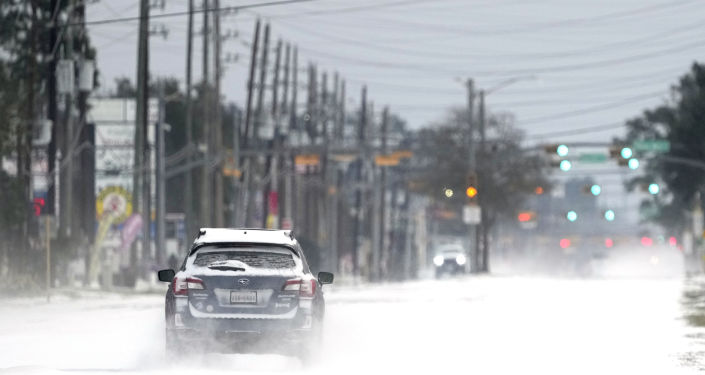 A Facebook post reportedly written by a former Colorado City, Texas Mayor and since deleted has gone viral, stirring up a frenzy of irate comments on social media.

As an icy winter storm across Texas made headlines, with Republican Governor Greg Abbott issuing a disaster declaration for all of the state’s 254 counties, Tom Boyd is said to have lambasted his city’s residents for failing to duly prepare for inevitable utility service issues such as electricity and water shutoffs.

In his Tuesday post, according to Newsweek, Boyd wrote that “no one owes you or your family anything; nor is it the local governments responsibility to support you during trying times like this! Sink or swim, it’s your choice!”

​The official reportedly added that he was “sick and tired of people looking for a damn hand out!”

Boyd appeared to suggest people work on a “game plan” to provide for their families in such emergency situations and “think outside the box”.

The ex-mayor is believed to have denounced the victims of Winter Storm Uri who are reaching out for help as a “product of a socialist government where they feed people to believe that the FEW work and others will become dependent for handouts”.

Boyd is alleged to have concluded that it was time for people to “quit crying and looking for a handout! Get off your ass and take care of your own family!”

Screenshots of the reported post swiftly started gaining traction in social media, generating a flurry of negative comments, which decried the official’s “tone deaf” response to the dire situation the residents were facing.

Colorado City mayor… literally speechless at how anyone can be this tone deaf in a public service position. People are freezing without information and PAY for these services and somehow we are still blaming socialism. 😐 pic.twitter.com/jOZbOHvIn4

The people of Colorado City, Texas should remove this guy from public office as soon as they can. What a righteous asshole. https://t.co/sOXuKR084M

He has stepped down, apparently. Like you said what’s the point of holding a position to serve the public if you don’t want to do that?!

It seems he can dish out the heartlessness but can’t take it when it’s reflected back at him…at least he resigned, which will be a blessing to the town where he used to be mayor…they don’t need a hater in charge

He’s precious.
Funny he calls his fellow citizens & former constituents “lazy” for struggling & suffering in the cold & dark when it’s evident from his Scrooge-like diatribe that he was a lazy student, is a lazy parishioner, & was a criminally lazy mayor who couldn’t be bothered.

If I pay a company for service, I absolutely feel entitled to that service.

It’s amazing that so many people use “socialism” as a boogeyman, but often have no clue what it or capitalism even are.

Some comments conceded that on one point the ex-mayor was right.

He’s right about one thing, though:

God did give us a lot of tools to support ourselves, among them a voice to speak out against the injustice of a public official who’s more than happy to collect a salary of taxpayer money, but skip out on when they need leadership most.

​Subsequently, Boyd apologised for his remarks, writing that his words “were taken out of context”, and his message was meant for “folks that are too lazy to get up and fend for themselves”.

Boyd, who is still listed as the town’s mayor on its official governmental website, also claimed to have submitted his resignation on 12 February, and insisted he had been speaking as a citizen and not a public service official.

“I never meant to speak for the city of Colorado City or Mitchell county! I was speaking as a citizen as I am NOT THE MAYOR anymore,” Boyd is cited as having written in his follow-up post.

On 14 February President Joe Biden declared an emergency in Texas, ordering the Department of Homeland Security and the Federal Emergency Management Agency to coordinate disaster relief efforts to impacted areas, as the winter storm brought freezing rain and snow to swathes of the US, from Texas to the mid-Atlantic.

More than 34,000 residents were without power on 12 February, according to poweroutage.us.