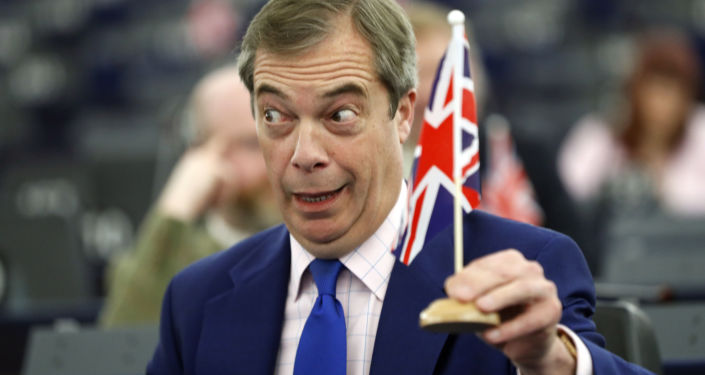 Brexiteer Nigel Farage wrote on Wednesday about the disconnect between Labour under its leader Keir Starmer and the “patriotic north” as well as London’s the law-abiding majority. To repair the relationship, Farage suggested Starmer should “rein in” the London mayor Sadiq Khan, a fellow Labour MP, who as per Farage, threatens to embarrass the party and create an “Orwellian monster”.

​Farage was referring to the Commission for Diversity in the Public Realm set up by the London mayor to raise public understanding behind existing statues, street names, building names and memorials in London to ensure they don’t uphold links to slavery and other reflections of “a bygone era.”

Established on the back of the global spread of the Black Lives Matter movement, the Commission is comprised of 15 panellists, including a Toyin Agbetu, described by the mayor’s office as a social activist.

“…but many would consider him a hard left extremist: in 2007 he heckled the Queen during a service at Westminster Abbey to commemorate the 200th anniversary of the abolition of the slave trade, and then threatened to punch a security guard when restrained,” argued Farage.

© AP Photo / Stephen Hird
Protestor Toyin Agbetu, left, is stopped by security staff after he interrupted a service to mark the bicentenary of the 1807 act to abolish the slave trade, attended by Britain’s Queen Elizabeth II, unseen, at London’s Westminster Abbey, Tuesday March 27, 2007.

“Does he know anything about the role played by the Royal Navy over decades in stamping out slavery? I am not convinced he does,” he added.

In his rant against the Commission, Farage insisted that as a result of the initiative “hundreds of thousands of pounds of taxpayers’ money will be spent trying to dismantle London’s history – against the wishes of the silent majority – by this cabal of unelected “social activists” appointed by a Labour mayor. Surely that won’t be popular.”

He then suggested that the Labour leader should dissociate from Khan in order to prevent him from ruining the chances for the party to win in the next election. The danger of Khan and his policies is that by widely supporting the BLM movement and its demands, it becomes completely out of touch voters in so-called ‘Red Wall’ seats.

The term, which has been criticised as a generalisation, refers to a set of constituencies in the Midlands, Yorkshire, North East Wales and Northern England, which tended to vote Labour.

“It doesn’t take a genius to work out why. Most people’s priorities relate to a good education for their children plus home and job security for themselves, so they don’t take particularly well to an MP genuflecting in support of a hardline left-wing group,” Farage wrote.

Farage’s arguments were slammed by critics online, who argued that until he is voted to be the London mayor or an MP, he was in no position to tell elected officials what to do.

It’s time to continue telling our multicultural story. We are proud of Britain 🇬🇧 and the friendships we have forged with ALL of our allies. Including EUROPE.

Farage argued that Starmer should aim to “act in the public interest” and cut ties with the London mayor.

“…or is he happy to give Khan the chance to lose him the next election by an even bigger margin than Jeremy Corbyn achieved in 2019?”

The next United Kingdom general election is scheduled to be held on 2 May 2024.