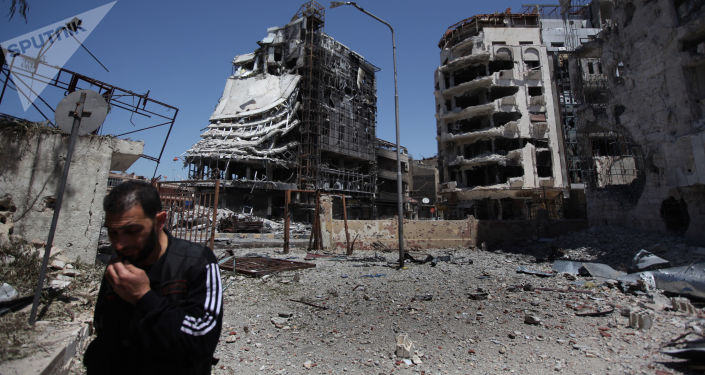 “As a result of reconnaissance and search operations of the Syrian government forces with the support of unmanned aerial vehicles of the Russian Aerospace Forces in the desert area in the east of the province of Homs, a large cache was discovered, used by Daesh militants to conduct terrorist activities in the provinces of Homs and Deir ez-Zor,” the spokesman said.

“Four militants in two pickup trucks with heavy machine guns, who were discovered near ​​the cache and apparently guarded it, were killed during the operation,” he said.

Earlier, the Russian Defence Ministry’s Centre for Reconciliation of Opposing Sides in Syria reported that terrorists from the Jabhat al-Nusra* terrorist group carried out 35 attacks in the Idlib de-escalation zone over the past 24 hours. On Sunday, it said that the Russian Defence Ministry had evidence that the controversial White Helmets militant group has arrived in northwestern Syria to stage a new “provocation.”

*Daesh (also known as ISIS/ISIL/IS), *Jabhat al-Nusra (also known as Al-Nusra Front, Jabhat Fatah al-Sham, or al-Qaeda in Syria) are terrorist organisations outlawed in Russia and many other states

UK Tax Break Made ‘Few Lucky Sellers’ Better Off, Others Have to Pay More for Housing, Analyst Says