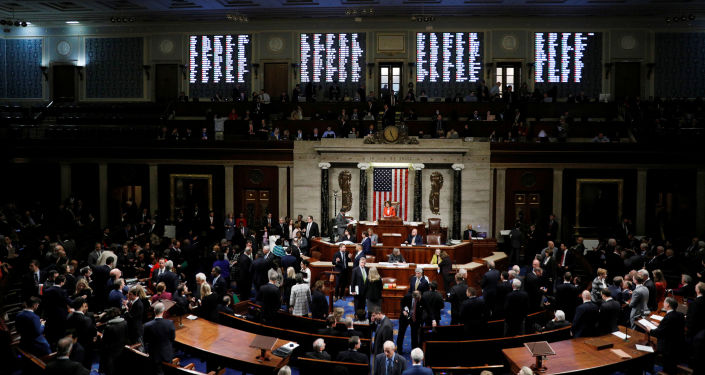 “Democrats’ failure to remove former President Donald Trump from the political equation could be highly damaging during midterm congressional elections on 8 November 2022,” Black said. “I anticipate that Democrats will lose their razor-thin majority in the House of Representatives and that there will be a Republican Speaker of the House afterwards. By 2022, Joe Biden will face a far more hostile Congress than today.”

On Saturday, 57 US senators endorsed and 43 rejected a single Article of Impeachment accusing Trump of inciting the 6 January incident at the Capitol. The conviction required a two-thirds majority vote of at least 67 out of 100 senators.

Black said Democrats are deeply depressed in the aftermath of their second failed impeachment drive against Trump.

In a statement after his acquittal, Trump said the impeachment trial was another phase of the “greatest witch hunt in the history of our country”. Trump also criticised the Democrats, saying their impeachment was a sad commentary that one political party in the United States “is given a free pass to denigrate the rule of law, defame law enforcement, cheer mobs, excuse rioters, and transform justice into a tool of political vengeance, and persecute, blacklist, cancel and suppress all people and viewpoints with whom or which they disagree.”

Black said evidence that the 2020 election was fixed continues to surface despite efforts by internet giants like Facebook, Twitter and others to censor individuals who are exposing such proof of voter and election fraud.

“Democrats appear to have massively rigged the election. Despite this, the mainstream media consistently refer to claims of election fraud as ‘unfounded’ or ‘lacking evidence.’ It has become increasingly hard for them to maintain this facade, however, since hundreds of witnesses have signed sworn affidavits that they personally watched the election fraud taking place. Convincing scientific evidence has established, with near certainty, that the vote tallies were altered. This mountain of credible evidence has made it imperative for Democrats to destroy Trump and those who support him,” he said.

Black noted that he believes the Senate’s refusal to convict Trump was a serious blow to the Democrats’ plans to “legitimise the highly-questionable presidential election”.

“There is growing dissatisfaction within the electorate over Democrat-inspired street violence, their contempt for morality, their release of violent criminals and illegal aliens, and their attempts to punish political enemies,” he said.

In addition, Black said Democrats failed to convict Trump because they were unable to present “a single shred of evidence” that the former president was guilty of inciting an insurrection.

“Indeed, his speech to demonstrators urged them to act “peacefully,” he said. “In that way, the trial resembled the first impeachment over the infamous Russia hoax. Before Trump was even sworn in as president, Democrats at the highest levels of government conspired to use a dossier concocted by British MI-6 spy, Christopher Steele, to frame and impeach Donald Trump for working with Russia to rig the election. Despite a lengthy show trial, not one shred of evidence was presented to show that President Trump had done anything improper.”

When asked whether the impeachment trial could affect Trump’s chances to come back to power, Black said that nothing frightens his opponents more.

“Democrats had hoped that they could convict President Trump in the Senate. If they had done so, they would have conducted a second vote to bar him from ever holding public office,” he said. “Since they were unable to do so, they are desperately searching for another way to block his possible reelection.”

Black pointed out that Democratic Senator Tim Kaine of Virginia even discussed the possibility of using the 14th Amendment of the Constitution to dispense with a trial and simply vote to declare Trump guilty and strip him of his right to ever run for office again.

However, Black stressed that a bill to declare a person guilty and prescribe his punishment without trial is a classic Bill of Attainder.

Asked whether the current president will be able to unite the country, Black said, “Joe Biden has assumed office from an extraordinarily weak position. Many Americans do not believe that he was duly elected president, and his cabinet seems poised to adopt policies that are highly unpopular. There already appears to be growing dissatisfaction with the new administration, and that does not bode well for its future,” Black concluded.

Rumours Swirl That Netanyahu, MBS Were Set to Meet in Abu Dhabi During Bibi’s Historic Trip