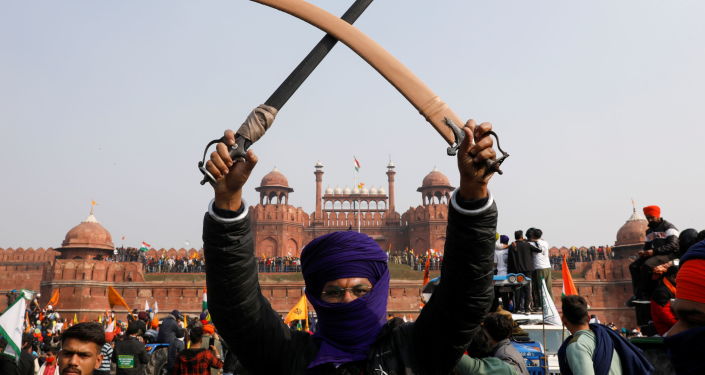 Delhi Police have arrested one of the main protesters involved in violence that took place at India’s iconic Red Fort on Republic Day during the tractor rally, officials said on Wednesday. According to the police, the accused, Maninder Singh (30), was arrested at Delhi’s Pitampura area on Tuesday evening.

“Singh was one of the most wanted people in the Red Fort violence case on Republic Day this year. He was seen in a video swinging two swords at the Red Fort with intent to motivate/radicalise and energise the violent anti-national elements indulging in brutal assault/attack on police persons on duty with swords, iron rods, axes, sticks etc and damaging Red Fort,” the Delhi Police said in a statement.

​The police have recovered the two swords, 4.3 feet in length, that the accused wielded at the Red Fort.

“During interrogation, Singh disclosed that he was radicalised when he saw the provocative Facebook posts of various groups. He used to visit the Singhu Border (one of the main farmers’ protesting sites on the outskirts of Delhi) and was highly motivated by speeches made by leaders there,” a senior police official said.

Singh had further motivated six persons in his area to take part in the violence. All six of them, who were riding bikes, had accompanied a tractor rally of farmers.

“As per their plan, the accused along with his associates and other unknown armed miscreants entered the Red Fort and Singh did sword dancing/swinging. That sword dancing had motivated violent protesters to cause more mayhem at the Red Fort by indulging in all sorts of violence,” he added.

So far, Delhi Police have registered 44 cases and arrested around 135 people including actor Deep Sidhu and some who were involved in the violence on Republic Day. Several farmers’ union leaders have been named in the police cases.

On 26 January, the protesting farmers did not follow the prearranged route agreed upon by Delhi Police and broke barricades to enter the national capital. They clashed with police, and vandalised property in several parts of the national capital during the farmers’ tractor rally. They also entered the iconic Red Fort and unfurled their flags from its ramparts.

The farmers had arranged a tractor rally on India’s Republic Day to reiterate their stance on the Prime Minister Narendra Modi-led government’s farm reforms.

‘Classy as Always’: Kinzinger Drubs Trump for Reportedly Calling McConnell a ‘Dumb Son of a B*tch’