54% of GOP Voters Would Back Trump in Hypothetical 2024 Presidential Primary, Claims Poll 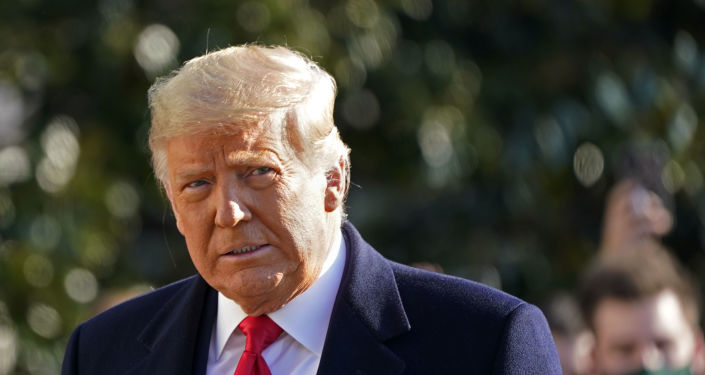 A new poll has shown that in a hypothetical 2024 Republican presidential primary, Donald Trump would be the favoured candidate for most Republicans, with 54 percent of respondents saying they would back the former president.

59 percent of GOP voters said Trump should play a “major role” in the Republican Party in the future, according to the Politico-Morning Consult poll released on 16 February.

Only 17 percent believed that the former president should play no role at all in the Republican Party.

This suggests that the former president has regained his earlier standing in a hypothetical GOP primary matchup, as the numbers echo those of late November 2020, before support for Trump plummeted in the wake of the Capitol riots on 6 January.

A new poll by Morning Consult/Politico has found that 53% of Americans would vote for Donald Trump if he ran for president again in the 2024 Republican primary.https://t.co/rG5qJPvCnd

​Now, three days after his acquittal in his second impeachment trial on a charge of inciting the insurrection at the US Capitol, Trump’s standing has soared by 18 percentage points in an upward trend that started to take shape ahead of the Senate trial.

The poll also shows that Republican voters are now becoming less disposed to blame Donald Trump for the riots, as compared with the survey carried out on 6-7 January, in the immediate aftermath of the events.

The share of Republicans who said Trump is very or somewhat responsible for the events dropped 14 points, to 27 percent.

Meanwhile, the share of GOP voters who blamed President Joe Biden for the capitol riot increased 4 points, reaching 46 percent. The share of those who held congressional Democrats responsible grew by 10 points to reach 58 percent.

When asked by the poll if they approved of the House of Representatives’ vote to impeach Trump, 58 percent of voters said they approve of Trump’s impeachment, which approximately matches the numbers displayed after the House’s vote on 13 January.

Donald Trump, who would be 78 by election day in 2024, had earlier dodged being barred from office in the future, after a 57-43 Senate vote to convict him on a single article of impeachment. Seven Republicans broke ranks to side with the Democrat senators in a vote to convict Trump.

The conviction required a two-thirds majority vote of at least 67 out of 100 Senators, and the final tally was 10 votes short.

The trial vote in the Senate came after five days of arguments presented by the Democrat impeachment managers and Trump’s legal defence team related to the former president’s actions ahead of and during the 6 January “Stop the Steal” rally and the subsequent breaching of the Capitol by protesters.

In the wake of the controversial rally, several hundred pro-Trump protesters besieged the Capitol, breaking in, ransacking the building, and forcing lawmakers to postpone the process of certification. Five people died in the unrest. More than 200 protesters were later arrested by law enforcement.

The impeachment trial, the second to be initiated during Trump’s term as US president, concluded after he had already left office. It was triggered by the House Democrats, who alleged he was responsible for the actions of the rioters; that he’d provoked his supporters with claims of wide-spread election fraud, which he failed to prove in court.

© REUTERS / US Senate TV
U.S. Capitol Police Officer Eugene Goodman (top) acknowledges a standing ovation from U.S. Senators, the House of Representatives impeachment managers and former President Donald Trump’s attorneys just before the Senate awards Goodman a Congressional Gold Medal during the fourth day of the impeachment trial of the former president on charges of inciting the deadly attack on the U.S. Capitol, on Capitol Hill in Washington, U.S., February 12, 2021.

Trump, who during his address to supporters on 6 January called on supporters to oppose Joe Biden’s nomination “peacefully”, has vehemently denied his responsibility for the actions of the protesters. The former president was also among the first to condemn the violence at the Capitol building.

The poll results come as earlier an editorial in the Wall Street Journal suggested Donald Trump would not win another national election.

This was followed up by Senate minority leader Mitch McConnell writing in an opinion piece on Monday for the same outlet to defend his acquittal decision while lambasting Trump for “unhinged falsehoods he shouted into the world’s largest megaphone”.

McConnell also emphasised he will oppose pro-Trump candidates seeking Republican nominations in the 2022 midterms, if he believes they would damage chances of beating a Democrat.

As for the former POTUS, he is yet to commit himself to taking another shot at a second term.

“We have so much work ahead of us, and soon we will emerge with a vision for a bright, radiant, and limitless American future.”

Rooster Appears to Kill its Owner With Cockfight Blade in India