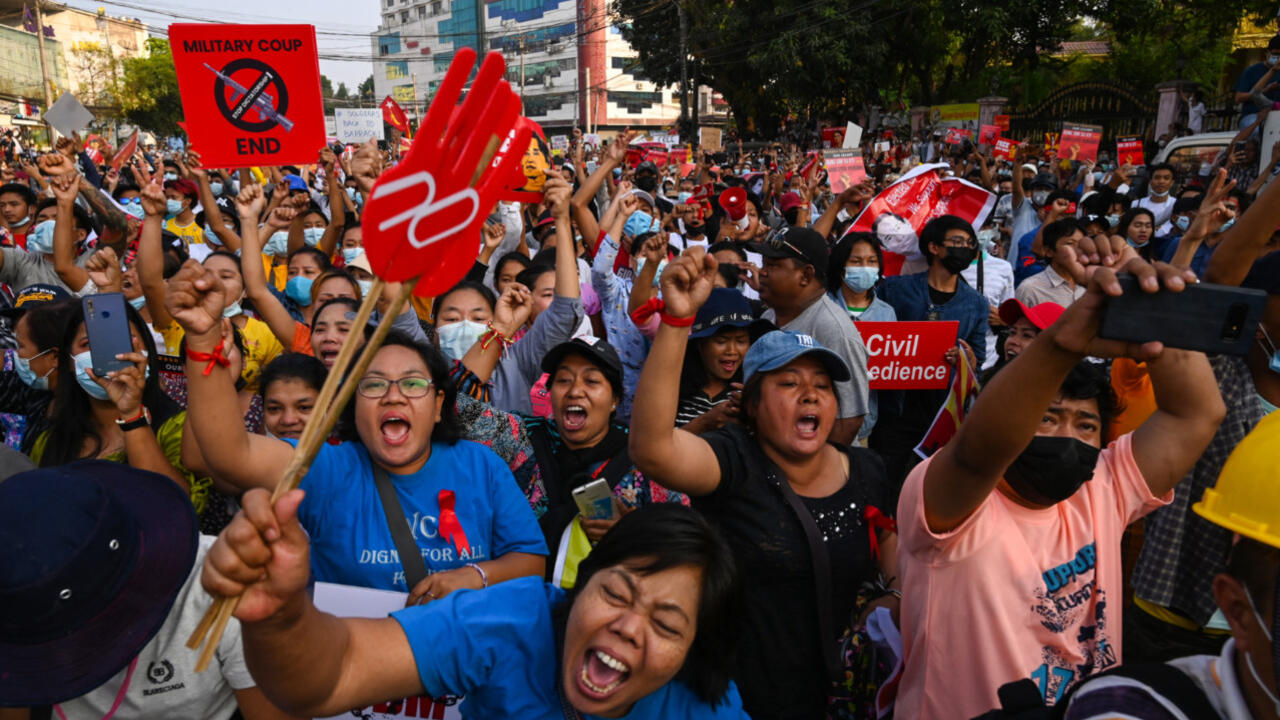 Myanmar’s junta deployed extra troops around the country and choked the internet on Monday as it intensified a crackdown on anti-coup protests, but defiant demonstrators again took to the streets.

The military has steadily escalated efforts to quell an uprising against their seizure of power two weeks ago, which saw civilian leader Aung San Suu Kyi detained along with hundreds of others, including members of her democratically elected government.

Suu Kyi and President Win Myint are expected to be questioned by a court “via video conferencing” in the country’s capital of Naypyidaw this week, said lawyer Khin Maung Zaw, adding that he had not been able to make contact with either client.

Neither has been seen in public since they were detained in dawn raids on February 1, the day of the coup.

‘Fear is going away’

The generals imposed an hours-long internet shutdown on Monday morning and ratcheted up the military’s presence across the country overnight, including armoured vehicles in Yangon, the nation’s commercial hub and biggest city.

Fresh protests — though much smaller than in previous days — again flared in the city, including near the central bank where troops were deployed.

“Patrolling with armoured vehicles means they are threatening people,” said 46-year-old Nyein Moe, among the more than 1,000 gathered in front of the bank.

“People are marching on the streets and they don’t care to be arrested or shot. We can’t stop now. The fear in our mind is going away.”

Large crowds also gathered outside the Chinese and US embassies in Yangon, carrying signs that read “Get out dictator”.

By afternoon, news of a strong police presence at the Yangon headquarters of Suu Kyi’s National League for Democracy (NLD) party drew thousands to the scene.

They chanted “End military dictatorship” as the officers stood guard.

“About seven police officers searched for about 30 minutes (for two MPs),” NLD member Soe Win told AFP after the security forces left without finding them. “Now everything is settled.”

A protest led by student groups in Naypyidaw on Monday was met with force after the gathering had retreated. Police also arrested dozens of the young protesters, though some were later released.

“We were peaceful and even apologised… but then they fired water cannon,” a high school student told AFP, refusing to provide a name for fear of repercussions.

Violence also broke out in Mandalay, the country’s second-largest city, leaving at least six injured after police used slingshots against protesters and fired rubber bullets into the crowd.

Demonstrators retaliated by throwing bricks, said a rescue team member who assisted with the injured.

“One of them needed oxygen because he was hit with a rubber bullet in his rib,” rescue team head Khin Maung Tin told AFP.

Journalists on the scene also said police had beaten them in the melée.

Internet connectivity was later restored around the start of the working day, with NetBlocks saying the blackout lasted around eight hours.

Intensifying fears the military was going to impose a far harsher crackdown, troops in the northern city of Myitkyina fired tear gas then shot at a crowd on Sunday night.

A journalist at the scene said it was unclear whether police had used rubber bullets or live rounds.

Much of the country has been in uproar since soldiers detained Suu Kyi, ending a decade-long experiment with democracy after generations of junta rule.

So far, 400 people — including striking workers — have been detained since the coup, according to the Assistance Association for Political Prisoners monitoring group.

France will keep supporting the people of Myanmar in their struggle for democracy, a spokeswoman for the Quai d’Orsay, the foreign ministry, said on Monday.

The deployment of armoured vehicles in several cities and increasing use of violence was of serious concern, the spokeswoman added.

“Together with its European and international partners, France will continue to support the people of Myanmar in their struggle for democracy and the rule of law,” spokeswoman Agnès von der Muhll said in a statement.

A joint statement from the US, British and European Union ambassadors urged security forces not to harm civilians.

UN special rapporteur Tom Andrews said the junta’s efforts to rein in the burgeoning protest movement was a sign of “desperation” and amounted to a declaration of war against its people.

“Attention generals: You WILL be held accountable,” he tweeted.

The country’s new military leadership has so far been unmoved by a torrent of international condemnation.

The junta insists it took power lawfully and has instructed journalists in the country not to refer to it as a government that took power in a coup.

On Monday coup leader Min Aung Hlaing said “except the West”, other members of the international community say Myanmar’s affairs are “its internal matter”, echoing China and Russia.