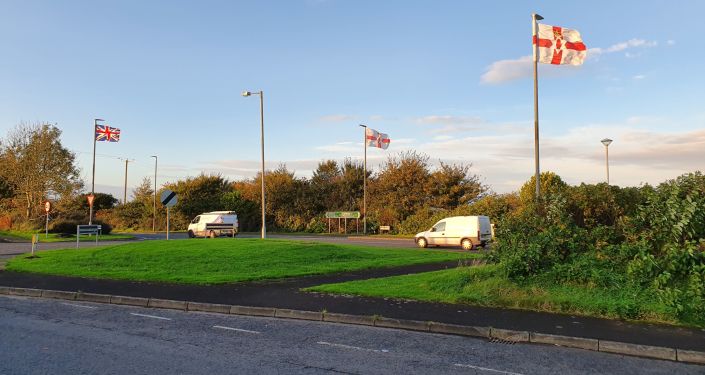 Unionists opposed to the Northern Ireland Protocol have taken to social media and put up signs in loyalist communities to highlight their fury at the so-called “Irish Sea border”.

Last month, a row broke out after the European Commission briefly blocked COVID-19 vaccines from being delivered from the Republic of Ireland into Northern Ireland.

Under the Northern Ireland Protocol – which was part of the Brexit trade deal – the Irish land border would remain open, something that was crucial in the 1998 Good Friday Agreement, which ended a 30-year sectarian conflict in Northern Ireland.

Aghadowey says NO to the Irish Sea Border. 🇬🇧 pic.twitter.com/dfEKf3l4Ka

​But in order to do that Northern Ireland effectively had to become part of the European Union single market, and a new border for trade checks was introduced between the British mainland and Northern Ireland, infuriating loyalists, although those checks have not been invoked as there is currently a “grace period”.

The UK government has called for the grace period to be extended until 2023 to give companies more time to prepare but the Democratic Unionist Party (DUP) of Arlene Foster has joined smaller unionist and loyalist groups in opposing the ‘Irish Sea border’ altogether.

A new group calling itself the United Unionists of Ulster issued a statement to the Belfast News Letter newspaper saying it believed in “peaceful and democratic means” but called on the Loyalist Communities Council to take unspecified action.

There is a fear the row could unravel the Good Friday Agreement and provide ammunition for long-dormant paramilitary groups like the Ulster Volunteer Force (UVF) and the Ulster Defence Association (UDA) who both remain adamantly opposed to the idea of a united Ireland.

Worth noting that a number of senior loyalists from Ards & North Down, on social media, are sharing the letter that has a warning for the peace process, over the Irish Sea border. Gives credence to the understanding the letter is supported by the UVF, UDA and RHC in the area.

​On 11 February, British government minister Michael Gove and European Commission vice-president Maros Sefcovic said they would “spare no effort” on finding a solution.

But Sefcovic rejected the idea of extending the grace period until 2023 for chilled meat, parcels and medicines brought into Northern Ireland from the rest of the United Kingdom.

He said any flexibility would mean the United Kingdom committing to align with EU single market rules.

Well done to Ards & North Down. Where all Loyalist groupings have come to together to voice and demonstrate their opposition to the NI protocol to all MLAs & MPs in the area. Hopefully more areas follow suit.

​Irish Prime Minister Micheal Martin has called on all sides to “dial down the rhetoric.”

“We just need to calm it, because ultimately we want the United Kingdom aligning well with the European Union. We want harmonious, sensible relationships,” he told RTE radio last week.

Anger at the DUP’s continued implementation of the Irish Sea border is growing across the entire country. People see beyond the bluster; the DUP must stop being Protocol implementers & become Protocol wreckers! pic.twitter.com/xfvpmE0oNU