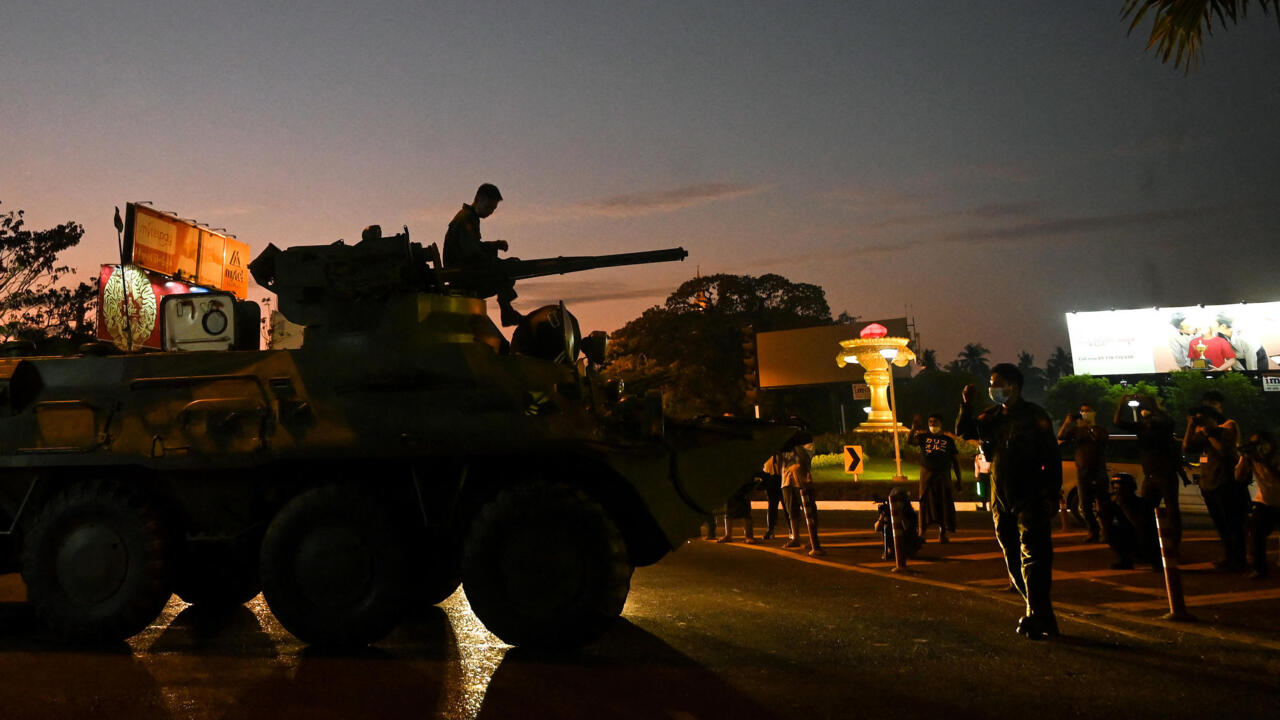 Myanmar was bracing for a crackdown on anti-coup protests on Sunday after reports of tanks in the street and troop movements in the country’s largest city. The US embassy in Myanmar warned that telecommunications could be disrupted during the night.

Much of the country has been in uproar since soldiers detained Aung San Suu Kyi and ousted her government, ending a decade-old fledgling democracy after generations of junta rule.

A US embassy-affiliated Twitter account warned late Sunday of possible telecommunications interruptions “between 1:00 am to 9:00 am” on Monday local time.

“There are indications of military movements in Yangon and the possibility of telecommunications interruptions overnight,” according to the embassy’s official American Citizen Services account.

There are indications of military movements in Yangon and the possibility of telecommunications interruptions overnight between 1:00 a.m. and 9:00 a.m. U.S. citizens in Burma are advised to shelter-in-place during the 8:00 p.m. to 4:00 a.m. curfew hours.

Norway-based Telenor — which has blocked Facebook and Twitter at the request of the government since the coup — did not respond to request for comments.

But it announced late Sunday on its site that it is “not possible for Telenor to disclose the directives we receive from authorities”.

The news of a telecommunications blackout comes as authorities have stepped up tactics against protesters, with security forces dispersing a demonstration in northern Kachin state by firing at protesters.

“They threw the tear gas first and then opened fire constantly to disperse the people,” a local journalist told AFP, adding that it was unclear if the authorities used live rounds or rubber bullets.

‘The world is watching’

Western embassies released a statement on Sunday calling on Myanmar security forces to “refrain from violence against demonstrators and civilians, who are protesting the overthrow of their legitimate government”.

The embassies of the European Union, the United Kingdom, Canada and 11 other countries signed the statement.

The statement continued, “We support the people of Myanmar in their quest for democracy, freedom, peace and prosperity. The world is watching”.

Police in the country have also warned the public not to harbour fugitives, as they are hunting seven people who have lent vocal support to the protests, including some of the country’s most famous democracy activists.

“Those who receive them will (face) action in accordance with the law,” said a notice in state media on Sunday.

Among the list of fugitives was Min Ko Naing, who spent more than a decade in prison for helping lead protests against an earlier dictatorship in 1988 while a university student.

“They are arresting the people at night and we have to be careful,” he said in a video published to Facebook on Saturday, skirting a junta ban on the platform, hours before his arrest warrant was issued.

“They could crack down forcefully and we will have to be prepared.”

The 1988 protests vaulted Suu Kyi to the top of Myanmar’s democracy movement, and the Nobel laureate spent years under house arrest as a prisoner of the generals.

She has not been seen in public since she was detained on February 1 alongside top aides.

Nearly 400 others have been arrested in the days since, including many of Suu Kyi’s top political allies, according to the Assistance Association for Political Prisoners monitoring group.

The news did not deter thousands in Yangon from returning to key intersections around the city in a ninth straight day of street protests.

In Yangon, many areas have begun forming neighbourhood watch brigades to monitor their communities overnight — in defiance of a junta curfew — and to prevent the arrests of residents joining the civil disobedience movement.

Some have also expressed fears that a mass prisoner amnesty this week was orchestrated to release inmates into the public to stir up trouble, while freeing up space in overcrowded jails for political detainees.

“We don’t trust anyone at this time, especially those with uniforms,” said Myo Ko Ko, a member of a street patrol in Yangon.

Near the city’s central train station, residents rolled tree trunks onto a road to block police vehicles and escorted away officers who were attempting to return striking railway employees to work.

The country’s new military leadership has so far been unmoved by a torrent of international condemnation.

An emergency session of the UN Human Rights Council on Friday called for the new regime to release all “arbitrarily detained” people and for the military to hand power back to Suu Kyi’s administration.

Traditional allies of the country’s armed forces, including Russia and China, have dissociated themselves from what they have described as interference in Myanmar’s “internal affairs”.

The junta insists it took power lawfully and has instructed journalists in the country not to refer to itself as a government that took power in a coup.

“We inform… journalists and news media organisations not to write to cause public unrest,” said a notice sent by the information ministry to the country’s foreign correspondents’ club late Saturday.